Compassionate Eating: Life as a Locavore ~via Todd Mayville.

Above, a meal entirely sourced from my local Farmers’ Market.

As I mentioned in my review of The Compassionate Carnivore, I enjoy a good steak. Now that’s not to say that every meal I eat has to contain some sort of meat product, and in fact, about a year ago I moved to cut back on the amount of meat my family and I eat to one meat meal a day (with smaller portions of meat) with two or three total vegetarian days each week. Last April, I made the decision to get our beef and chicken exclusively from a small, local farms (i.e., the farmers’ market) instead of King Soopers or Costco (or even Whole Foods), deciding that I was no longer going to opt-in to supporting the factory farm model of meat production. The Compassionate Carnivore has strengthened my resolve to the extent that now, when I go out to eat, if I can’t be sure of the source of the meat, I’m going to eat vegetarian. I really just can’t bring myself to eat factory farmed meat anymore. (Of course, thanks to my determination to avoid high fructose corn syrup, GMO’s and trans fats, my options are even fewer, but that’s a whole ‘nother conversation.) Fortunately I don’t have to. Within the past month I’ve found local and humane sources for beef, chicken, pork, lamb, and bison; even my eggs and milk come meet the standard of humane and local. The addition of meat to my locavore ways has been a recent and welcome addition to my diet. For the past few years, the only time I’ve purchased non-local produce has been when the farmers’ market has been closed for the season, or if I happen to get a particular craving for bananas, oranges, or some similar food that can’t be grown locally. There have even been increasing numbers of meals at my house that are 100% local; last week I made a stir fry that consisted 100% of ingredients from my local farmers’ market, and I washed it all down with raw milk from Windsor Dairy. (It was pretty tasty if I do say so myself.) Has this new and improved locavore lifestyle been a lot of work and effort? Oh yes, definitely. Making sure I could eat locally year round meant tracking down a farmer who offered a winter CSA as well as a steady meat supply. I’ve been able to set up a year round supply of meat, and I’m able to get fresh, local veggies for nine of 12 months; the only time I may end up having to rely on frozen or grocery store produce will be January-March, which isn’t so bad, and since things like bananas are in season then, I’m still able to eat seasonally if not locally. It also means that on those days when it’s pouring down rain (or snow), I still find my way to the market to get my groceries; as I told one farmer on a particularly cold and rainy Saturday a few weeks ago, “My determination to eat locally and support local farms overrides my common sense that tells me to hit a nice, dry, warm supermarket.” The result? My food tastes better and because it is more nutrient dense, I’m eating less (dieters take note!), and in many ways I feel a lot better. Of course, it doesn’t hurt that I know my food is also safer, and not subject to the whims of an ineffective FDA. One of my students recently asked me if the difference in taste and my health was simply psychological. Is that possible? Yes, but in the long run, does it matter if it’s “merely” psychological, or if it’s psychosomatic? The end result is the same, really, and as I’ve said before, living mindfully may not be convenient, but it is worth it. (With no argument from my kids… they are beginning to understand the issues more with every recall of food, toys, and other products.)

The other part of this whole change is the noted lack of convenience foods in what my family and I eat. I do still buy some things pre-made: pasta, pizza crust, bread, some soups and such because some things do tend to take more time than I have most days, but I haven’t made mac-and-cheese out of a box in a couple of years now, and putting the time, effort, and energy into feeding my family just feels good. I’m not an official member, but even my kids have noticed that slow food means good food, and the fact that I’ve added a touch of social rebellion to our lifestyle only adds to the appeal for my teens.

I know plenty of people who feel that I can’t call myself “green” if I eat meat. Yet, the issue isn’t so much that I’m eating meat as it is the source of the meat. Small, local farms not only tend to have better conditions for the animals, but as research indicates, small local farms also have much less impact than factory farmed meat does, and in many ways can actually help reduce global warming. A recent article in Ode magazine presented an interesting point of view on farmers who see themselves as carbon farmers rather than meat or dairy farmers, and while the concept of carbon sequestering is nothing new (that’s what offsets are about), the idea of it being applied to farming is something of a departure from how we’ve come to think of farming. It’s ironic that it may end up being the small farms that save us. For so many years it was believed that big farms were the key, going back to the 70s and Earl Butz’ admonition to farmers to “get big or get out.” Years later we’ve discovered that “stay small” has in many ways meant “save the planet.” Turns out maybe all of those “hippies” with their organic food from small, local farms knew what was up after all. Eating local (as much as possible) and organic from small farms isn’t just good for you, it’s good for the planet; a nice double benefit to a simple stir-fry. 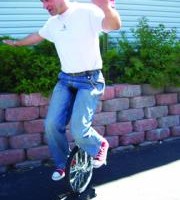