Crowds converged on Brooklyn, Sunday, for the last installation of The Pool Parties V.   After being resuscitated by Senator Chuck Schumer, there was a palpable air of congeniality.  Walls were broken down as Hipsters were so bold as to mingle with…errrrr other hipsters (that’s still pretty good in Brooklyn).  Slated to play were Dominique Unique Young, Delorean, and ‘Special Guests’, a mystery collective of artists that generated more buzz and rumors than Dr. Dre’s forthcoming Detox.  Due to the Blogoshere’s prediction of a surprise Gucci Mane appearance, sightings of Hip Hop Heads, Dutch Masters’ wrappers, and baggy pants didn’t come as too much of a surprise, but still punctuated the usually homogenous mass at Williamsburg Waterfront.

I arrived a bit early and made my typical rounds of the Dodgeball court, Mist Tent, and shade-covered beer area before posting up against the sun baked barricades to wait for Dominique Young Unique.  When finally she trotted on stage, she was a ball of contradictions.  She’s undersized, over-energized, under-dressed (This did not upset me), over-made-up, under-aged, and over-sexualized.  She’s loud, not only in her fashion sense (tall stilettos, a shimmering satin bra, shining jeans, and bug-eyed shades), but in her mannerisms and music too.  She flamboyantly struts across the stage choreographing her music’s manic tempo with well-timed ass-shakes and breast-jiggles.  As she obstreperously fired notes into the microphone, it’s hard to make out any of the words she was actually saying.  The beats race feverishly and above all their clamor, the only enunciated words are ‘Pussy Poppin’ and ‘Show my Ass.’

Luckily any pontifications on the ethical consequence of self-exploitation were pushed out of my brain by anticipation for Delorean, who took the stage a few minutes after Dominique’s percussive set ended.  As you may have guessed, this is the point where I became the screaming, teenybopper, groupie that I thought I had left behind at my 14th Birthday.  With Bassist Ekhi Lopetegi’s bashful introduction, “We are Delorean from Spain”, the band launched into the afternoon’s most gripping set.  Tearing through tracks from Ayrton Senna, Subiza, and Transatlantic KK, the band recognized the entirety of their fanbase.  One thing that struck me was just how good of a drummer Igor Escudeo really is.  A lot of times when you listen to an ethereal band like Delorean, that relies so much on reverb, distortion, and other effects to create its dreamscapes, you figure the drumming is plugged in as well.  Seeing Igor pound away showcased his chops and was really inspiring.  Meanwhile watching Guitarist Guillermo Astrain incessantly tinker with a table of peddles reminded me of the technical complexity in Delorean’s work.  The set was only slightly marred by a blown subwoofer which drowned Ekhi’s voice during the closing track.  Afterwards, ‘Stay Close’, ‘Deli’, and ‘Seasun’ stood out in my mind as the best tracks they played.

After Delorean was ushered off  stage, the crowd grew increasingly anxious as the rumor mill spun out larger, more absurd artist.  While the people in front of me discussed the odds of Jay-Z’s appearance, the group behind me mocked them and instead claimed it was Mos Def.  When the mid-west hip-hop duo, The Cool Kids, took the stage people weren’t really sure what to think.  Surely they were an opener for a grander Rap name, but who?  As Mikey Rocks and Chuck Inglish traded bars on stage, in their signature finish-the-other’s-sentence flow, an overwrought crowd stared beyond them to see who could be lurking backstage waiting to surprise Brooklyn.  Leaving after about 3 songs (ending on the bass-heavy ‘Gold and a Pager’), Mikey made mention of a certain ‘Gucci’ the event organizers had up their sleeves.

However gratification wasn’t provided in the next artist, Run DMC.  Now I know I’m going to catch a lot of flak for this, but this was the worst set of the show (and mind you he was followed by a transvestite Bounce musician).  First off, no matter what any Title Rights say, Darryl McDaniels is not Run DMC.  Seeing this abridged version of a legendary Hip-Hop group was kind of like going to see Zeppelin and only having John Paul Jones show up.  That is, if John Paul Jones spoke in slurred speech, told rambling demented stories to introduce each of his songs, and wrote a song inspired by a paranormal experience with none other than ‘Kurt Corbain’.  This latter aspect of DMC’s set was probably the most unsettling.  DMC’s rants, which were originally comically absurd, became borderline schizophrenic when he detailed how ‘Kurt Corbain’ (and yes, this is how he pronounced it) came to his room the night before and told him to write a song about the virtues of education.  The song was a dud and characterized a set which stood as a blaring reminder that it’s never too early to start a 401(k).  I couldn’t grab an interview, but I suspect Mr. ‘Corbain’ was probably very pissed off for being dragged into co-ownership of that track.

The final nail was placed when Andrew W.K. (Can somebody remind how this guy has a career?) joined forces to do a bastardization reinvention of ‘Walk This Way’.

Another disappointment succeeded DMC’s set, when Doug E. Fresh came out, beat-boxed for 15 minutes, and sang Biz Markie’s ‘Just a Friend’ to his mother.

A Geriatric Dancer in Big Freedia's Show (via Nicky Digital)

Followed immediately by Big Freedia, a New Orleans bounce musician who happens to be a very convincing artist, while remaining a very unconvincing cross-dresser, a bit of levity descended on the normally critical crowd in Williamsburg.  We were reminded that Brooklyn is home to an eclectic bunch of people, from Balearic beat-makers to Burnt-out Hip Hop Stars to Burly transvestites, and its this diversity blending to create an endemic culture which makes Brooklyn so distinct.  Unfortunately, the beauty of this sociological epiphany was lost when Big Freedia launched into a song called ‘Ass Everywhere’, and their 70 year-old dancer, in a leotard, bent over a chair and began gyrating violently.

Finally, Assemblyman Joseph Lentol and Senator Chuck Schumer came out, made a few remarks about how lovely Brooklyn’s music scene is, and introduced Gucci Mane (BTW If this review is beginning to seem long, note that this was 5 hours of music later).  The crowd went apeshit!  Dreaded Rastafarians came bounding in from out of nowhere, instigating a moshpit and causing the more timid (and shorter) audience members to flee for safety.  Gucci’s performance was nonetheless amazing.  He rattled through bass-thumping tracks, utilizing his gruff voice and addled lyrics to make everyone in the crowd feel just a bit tougher. “Rock star lifestyle might don’t make it, Living life high everyday click wasted”, became an anthem for a generation lost in hedonism.

In the end the show became more of a festival.  Clocking it at 5 hours 45 minutes, it was a marathon for audience, crew, and artists.  Sweat drenched and jelly-legged, we retreated from the stage, leaving behind another summer fantasy and embracing Gucci’s words: Party, party, party, let’s all get wasted! 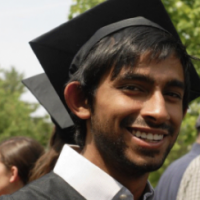 Karthik Sonty is a recent graduate of Colby College with a penchant for philosophy, strong opinions on music, and an obsession with rock-climbing. He placates these passions … Read full bio