Letter From A Bully.

Dianne sat next to me in second grade. Her last name started with a G but I can’t remember it.  She never looked you in the eye, rarely brushed her hair, and always sat alone. She concealed her bitten fingernails under hand-me-down sleeves and poked a hole in the end for her thumbs to stick out. I think of her every time I buy an expensive jogging shirt with a convenient  “thumb hole for added warmth”. I have always wanted to find her because I need to tell her something.

Dianne was bullied in school.

It was the early 1970s so the tormenting lacked the mercilessness that today’s cyber-bullying provides, but she seemed unhappy and alone.

Today, I listen to the news, a continuous loop of bullying stories ending in arrests, controversy, and heart breaking suicides. I am frightened for the future of my young son.

Massachusetts is the 42nd state to adopt an official anti-bullying law. It requires staff members to report bullying, principals to investigate, and law enforcement to become involved in extreme cases. But many say that it’s not tough enough.

Bullying comes in many forms ranging from the concrete hallways of school, to the uncivil anonymity of cyberspace. Kids are no longer singled out in the back of the parking lot. Bullies attack on social networks; no one witnesses the victim’s pain. Cruelty has morphed since I was young; it now disguises itself.

It was Valentines Day. The art projects were brightly colored, glittery mailboxes made from empty tissue containers. We taped them to the side of our desks. Popularity was determined by how many Valentines you received. As kids walked by Dianne’s box they knocked it to the ground and kicked it. I gave one Peanuts valentine to everyone in the class, including Dianne.

We watched the clock and willed the hands to hurry to 2:00 p.m., time to tally votes.  Dianne didn’t rush to undo the glittery flap and dump the contents with a flourish. She had no expectation.  I was counting; “Six, seven, eight, ooh! One from Mark.” Finally, Dianne lifted the lid and there he was, Snoopy. Her eyes filled with tears.  She turned and hugged me. Her uncombed hair went into my face and mouth.  “Thank you,” she whispered.

Bullies act out of fear and sadness.

They recreate their internal state in others, and find harmony with the turmoil. This eases their isolation by perpetrating the abuse they wish to avoid.

I am not suggesting that the bullies are the victims, but from a Yogic perspective we are co-creators of our existence. Repetitive thoughts shape our internal and even external worlds. We become the way we think. Perhaps, instead of relying on a “kids will be kids” attitude, or laws to curb this plight, parents need to teach each child to move through the world with higher consciousness and personal accountability.

We need to instill the foundation of compassion and empathy in children, and this begins at home.  If we assign this responsibility to schools or government, we lose our self-determination, invite paternalism, and relieve ourselves of blame.

One study, in Colorado, done after the Columbine killings showed a 4 ½ hour exposure to yoga over two weeks resulted in up to a 93% decrease in aggressive behavior in 4th and 5th grade children.

Perhaps, introducing the language of yoga at a young age can inspire permanent change. Instead of relying on vague threats of legal punishments, parents and schools can turn to yoga’s fundamental principles like Ahimsa, (do no harm in word, thought, or deed to any living thing) and a child will be guided by a conscience and the self confidence to do what is right.

It unifies breath and movement, mind and body, and each living being.  The largest and oldest living organism is the Aspen tree.  They are made up of a single root system, with up to one million shoots per acre, and have been in existence for 80,000 years. The root structure provides the tree an ability to heal itself after a wild fire, but if one tree falls prey to canker disease, it quickly spreads and wipes out the grove.

Human beings are entwined like Aspen roots and when we harm another we damage ourselves. Yoga’s highest goal is Samadhi, union with the Divinity in each of us. It shows us that we are all one —identity without differences. Our linkage can transmit empathy and healing, or provide fertile ground for a black, sooty wound to fester.

I hugged Dianne back, but not out of kindness. I kept her close to return a whisper.  “If you tell anyone I gave it to you, I will say you are a liar.” Later, I confessed my cruelty to my Mother. The words tumbled out of me before the kitchen door closed. She reminded me that the world is not only about our own experience, but also the experiences that we offer to others.

Thirty-seven years later, I still think of that moment and feel the callousness of my words. I am ashamed of my cruelty, my unwillingness to stand behind such a small kindness. I want to tell Dianne that I am sorry.

But Dianne, I owe you more than an apology. I owe you my gratitude. Since that day, I remind myself that I have the capacity to be unkind. Your sadness, on Valentine’s Day, instilled in me something that a State Bill cannot; it confirmed that every choice has significant consequences that travel further than we can imagine. And that has helped me, a little. I am a better person than I was, because I sat next to you.

Check out Marylee’s other article, “I Hate Handstands, The Apprentices Gift, and Where Sleigh Bells Ring.” 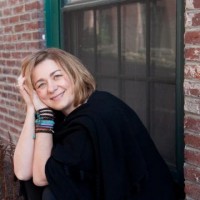 Marylee Fairbanks is a columnist for Gaiam, elephant journal, My Life Yoga, and Bliss.com, Her essays explore Motherhood and yoga, but mainly focus on her experiences with he… Read full bio