The bride wore Birkenstocks – life in the yoga capital of Australia.

My Dad gave me a card before I left for five months of yoga in Byron Bay Australia. ‘The surest form of contraception’ ran the by-line beneath a hairy-legged Birkenstock footed traveller.

Sure enough, the hottest seller at Byron Bay’s Sole Brothers was the Birkenstock. The white Birkenstock did particularly well. Was this a novel way of displaying travel souvenirs? The mud of the Lighthouse Trail, a beery night out at The Great Northern pub?

Ever the one to get into conversation with a handsome stranger I had soon talked the manager, Martin, into a drink. Turns out white Birkies are the sandal of choice for brides on Watego’s beach.

So Dad was wrong. (Sorry Dad.) Far from being a form of contraception Birkies will help you seal the deal.

Martin told me that no one gets married in church in Byron – it’s all done on the beach.

My Dad would have to be grateful for small mercies – a lot of the locals didn’t so much as dress down as not dress at all – beach nudity wasn’t confined to White’s – the official nudist beach and my yoga teacher had greeted my arrival at her yoga studio  sporting nothing more than a fig (in her hand) and a mug of Maharishi Ayur-Veda Vata tea.

High fashion just didn’t happen in Byron. The Sydney Morning Herald included a give away of a very gorgeous Autumn Winter Fashion Handbook. There were still copies left at 4pm; unheard of in London or New York.

The second hand bookseller turned away my copy of Sydney Shopping Secrets – he didn’t think there would be any demand. Don’t the locals want to know where Collette Dinnigan sells on discount? Or where Naomi Watts and Nicole Kidman buy their jeans? Clearly not.

It’s not that they are actively anti fashion. That would imply a statement and the Byron Bay signature style is one of supreme understatement. For girls, a simple white singlet with a shell belt and a couple of petticoats. A man’s tan is usually set off against a pair of longish shorts and billowy white shirt that offers fleeting glimpses of a toned torso.

In Byron how you walk is more important than what you are walking in. Locals are much more interested in what is going on beneath the white singlet with shell belt – and I don’t mean whether she is wearing underwear or not. (But for the record – probably not.)

This is explained by the locals’ origins. Many of them drifted into Byron in 1973, refugees from the Aquarius festival held in nearby Nimbin. My friend Gary was one of them – a founding member of the original ‘hairy wave.’

Nowadays Gary has lost pretty much all his hair, but he knows several important things about land management, enough in fact to make a strong contribution to a recent Weed Forum, and to retain a file on the subject for future reference.

Now whilst Gary wouldn’t spend his money on Collette Dinnigan dresses, even if he looked good in them, he would be more than happy to part with several hundred dollars jfor a workshop. And Gary is not the only one.

Locals are quite happy to spend a lot of money on workshops. Brandon Bays Journey work is hugely popular here. $495 buys you a ‘freeing, healing journey to the centre of your soul’. I think that this is rather good value for money, especially as you could end up saving your own life. Brandon healed herself of a tumour the size of a basketball in just six and a half weeks.

Its certainly a lot cheaper than the ‘Path of Love’ workshops which run to four figures and are very well attended by fifty something men with commitment issues.

Those who aren’t prepared to spend such sums on longer-term workshops can always take a leaf out of the forty page Byron Body and Soul Guide. Choose from the two hour Ceremony of Original Innocence – ‘the reconnection of human bio circuitry through coded ceremony’ or Dhwani Franco’s Liquid Bodywork, a highly pleasurable and effective massage technique consisting of wavelike rocking movements that reverberate around the body’. Wendy runs ‘Metanoia – subconscious mind therapy, energy balancing and auric healing’.

In fact Byron is so full of alternative ideas and new age people that you have to go a very long way to stand out.

One who does meet this challenge is ‘The Tennis Coach’. Doesn’t sound very alternative does he? Bet you are thinking Wimbledon lawns and cream teas. No, this is a different kind of tennis coach. He used to be a normal one, quite famous I am told, but now he has no balls and serves smiles from the left hand side of the Ewingsdale Road. I caught his eye the other day and he lobbed me a beautiful one. I sent a back handed smasher straight back. Sometimes he serves oranges from his unicyle as he sails down Jonson street.

Then there is the old hippy in Indian trousers and Shiva medallions who thanks you for sharing Jonson street with him, or tells you that you are wearing a beautiful shade of pink that day, when you really are wearing pink. How weird is that?

My favourite was the long haired and bare chested native American Indian who stands on street corners holding hands with people and staring deep deep deep into their eyes. I have never been when the hand holding begins so I don’t know if his partners are old friends, or plucked from random passers by. I spent much of my five months there hoping he would pluck me. This is why I took to standing on street corners.

Striking a pose in Collette Dinnigan

So here’s my advice, if you want a contraceptive that’ll work in Byron Bay you need to eschew the workshops and the peace and love and spend all your cash on discounted Collette Dinnigan. Here’s me in mine! 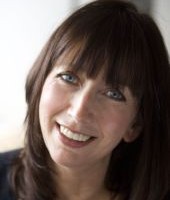