Is MTV a popular culture trendsetter and poisonous influence? From music videos to pregnant teens, drinks and pranks, you decide.

I couldn’t help myself. I stayed in a hotel last week in Stockholm and had the urge to click on the telly. And, for what I had hoped to be just a few minutes of BBC News turned into (I’m embarrassed to say) a 4-hour MTV marathon.

Sure the notorious question ‘what happened to the music?’ stems back to the mid 90’s when MTV spawned its first reality series, The Real World and Road Rules. Then given the grandioso success, MTV cut back even more on music videos and has since whipped up and spit out all sorts of reality and scripted series.

MTV’s decision to focus more on non-music programming, in addition to its moral influence on young people, has been a subject of debate for many years. And, although the verdict is out as to whether or not television can be a bad influence, our young people are still being raised on a steady diet of it. Some researchers claim that in order for television to be a negative influence, a person must first have a negative disposition. I can’t help but to wonder, is there truly anyone exempt of a negative disposition?

There seems little doubt that things like fashion, merchandise, accessories and slang are translated from MTV into schools and households. So why then would the translation of personal behavior be any different even if not reenacted in the same extreme manner? And, I don’t think we need to debate the element of habit and/or addiction and whether or not hours of MTV or television in general take people away from more healthy and productive activity. Mm-hm.

OK, if it’s not really ‘reality’ in all cases and if young people know better than to be mean, have thoughtless romps in the sack, drunken fights and use abusive language, then why does MTV show it? Why does any network show it? Is it our compulsion to pay for and witness our neighbors, our families and our friends abuse themselves and others to justify our own incessant internal abuse and delusion? Sure, these shows can make some people feel better knowing that there are others with problems, that they are not alone and that maybe their issues aren’t as bad, but what about those who use it to escape reality?

According to a study from 2005 (it’s all I could find) MTV reaches 88 million households, the average age is 21.6 and has hundreds of thousands of viewers daily between the ages of 18 and 34. Said to be the highest ranked channel for 18-24 year olds, MTV is sitting real pretty. Not to mention its influence and support from all its advertising partners, merchandise and affiliated sister channels (VH1, Nickelodeon, MTV2, etc). Did I mention that MTV Networks is owned by the world’s fourth largest media conglomerate, Viacom?

So, back to the content, during my 4-hour MTV marathon, I can’t say that I wasn’t slightly uncomfortably entertained (although I don’t feel ‘entertained’ is the right word). I was also really embarrassed. Embarrassed because I truly felt there was an exploitation and enforcement of some super sketchy values on our youth. I also couldn’t help to feel sad for a lot of the involved parties. I mean, is MTV finger pointing or what? What really is the point?

Here’s what I came across during my 4-hour stint.

A Double Shot At Love with Tila Tequila – A reality game show about a bi-sexual female looking for love among 16 straight dudes and 16 ‘lesbian identified’ ladies. My opinion: worst content. Ever.

My Super Sweet 16 – A reality show about teenagers with ridiculously wealthy parents who are demanding the biggest ‘blinged out’ birthday bash of their lives and all of their friends lives. My opinion: over-the-top excesses and sad depiction of money aspirations. Sorry Audrey.

Pranked – A 30-minute piece showcasing the so-called ‘best’ pranks caught on camera or online. My opinion: Horrible. The episode I saw showed a girl literally ‘buttering’ the floor outside of the shower where her boyfriend was bathing. See for yourself.

Teen Mom – A reality series that chronicles the lives of MTV chosen 16-year old pregnant girls. My opinion: I don’t know what to say about this one. I can see some of the positive aspects of it, but then I have to wonder about the teenagers they chose to portray. They seem to have issues beyond having a child at a young age and one can’t help but to wonder if MTV chose unstable characters for the ratings only. It’s a bit ambiguous to see where MTV really stands on the issue. Sorry Amber.

Moving In – A show about a gal who can’t decide between two guys to date and move in with, so she leaves it up to her parents. Did I mention the guys don’t know about each other? My opinion: Is this really reality? The parents in the episode I saw made one of the ‘contestants’ sleep in the garage on a board to ‘prove’ his feelings. Not to mention, they made him pull up a bush, yes a bush and eat vodka ravioli with excess salt. Do I need to say more?

Thank you MTV for reminding me once again that television can be a total and complete waste of time and yes, it is your fault I planted myself in front of you for 4 hours. 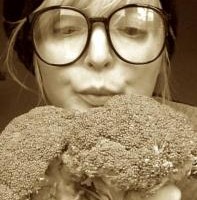