Boredom is good for you. ~ Jolee McBreen 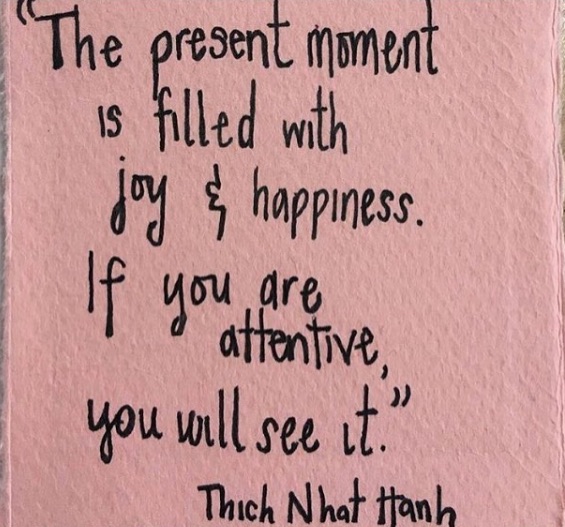 The best moments in life—even if they’re hard—are the ones we show up fully for.

In Buddhism we call our ego’s unwillingness to relax “hot boredom”—it’s that feeling of staying in a sauna a little too long—claustrophobic, hard to breathe, uncomfortable, we just want to get away. But if we can remember to breathe, if we slow down, put the phone or distractions or longing for entertainment away—we can finally relax, fully, into the here and now.

Boredom Helps You Be a Better Person?

Boredom is one of those mind-numbing catch-22s.

When you find yourself counting the lines in your hardwood floor all you can do is hope for something (make that anything!) to fill your time. When you’re busy at every waking moment and any free time is spent compiling ‘to do’ lists, all you hope for is that moment you can’t find anything to do.

Many people who experience boredom, and when I say ‘many people’ I mean everyone, can often get a little down in the dumps when the big B hits. You go through all the steps:

You’re bored, you identify that you’re bored, you start making a list in your head of all the things you should or could do. Then, you lay down, get on the computer, see what isn’t worth watching on TV, snack on the chips that have been whispering your name from the cupboard, then think some more about what task or activity you should carry out.

If you’re identifying with any of the steps above, don’t worry – boredom is good for you!

A new study claims that boredom can actually make people better themselves and encourage them to participate in more meaningful activities. As well as stimulating creativity.

Through numerous studies, researches have concluded that boredom increases pro-social motivations that will lead to positive behaviors. Some of these acts included donating blood or donating to charity.

Life coach Adrian Savage stated, “Being bored turns your mind inward and encourages reflection. When you’re bored, there’s nothing else to do but think… Boredom stimulates the search for better ways to think like nothing else does.”

Similar notions have been found off the scientific track and in the realm of yoga and meditation. Chögyam Trungpa Rinpoche, a Buddhist meditation master, credits boredom as a key part in one’s spiritual path,

“…boredom is important in meditation practice; it increases the psychological sophistication of the practitioners. They begin to appreciate boredom and they develop their sophistication until the boredom begins to become cool boredom, like a mountain river. It flows and flows and flows, methodically and repetitiously, but it is very cooling, very refreshing.”

Chögyam Trungpa has noted both “hot” and “cold” boredom. Hot boredom is so strong and uncomfortable you can barely sit still. It’s that tingle in your legs, thoughts that won’t stop, or the twitch in your left eye when trying to reach a peaceful place. Cool boredom is that peak point. You’ve made it up the hill, over the fidgeting and fighting, and descend, gliding through a consistent meditation practice.

I have to take this time to formerly apologize to my boredom. I never gave it much credit and considered it more of a nuisance rather than anything serving a purpose.

When I was younger, faced with a whole Summer of freedom, I would let my boredom lead to me to the fridge and straight to the television – cursing it all the way.

Looking back, a good chunk of what I would do when bored wasn’t beneficial to myself or others. I blamed my boredom for keeping me bored when it was in fact my own fault.

I guess I wasn’t thinking. Maybe my mocking boredom was just urging me to do something better.

Now of course this study should not encourage you to go home, sit on your ass, and hope to be inspired by your boredom. Trust me – I’ve spent countless hours waiting for inspiration or motivation to strike. Often all that strikes is frustration and anger because I’m bored and all that exertion just makes me sleepy. It’s merely finding positive effects in negative situations.

I have since accepted my boredom for who he is and we’ve been cohabiting in peace since 2010. Once I stopped getting mad at him for simply being around, I began to embrace his visits.

When I think about it, boredom has led me to many great things in my life, things that have shaped and transformed it for the better.

If I never got to a point of feeling bored or uninspired, I may never have moved out of my parents’ house or enroll in college. I probably wouldn’t have come to the conclusion to move to Portland, California, or ultimately find myself in Denver.

On a smaller scale, I probably wouldn’t search for new recipes to cook, try, and fall in love with, Yoga Sculpt classes at Core Power Yoga, or even something as basic as organizing any and all paper work in my filing cabinet – which should happen fairly soon when I actually buy a filing cabinet.

On the other side of the coin, boredom can lead you to a number of regrettable decisions, but I’ll leave those topics and their names aside. Boredom and I are in a good place right now and I don’t want to muddy it up with the past.

The schedule I keep now, which is completely my own fault, gets me up early and keeps me up late – generally scrambling to get things done and forgetting to pee. But I honestly wouldn’t have it any other way.

My relationship with boredom has evolved, especially in the past few years. The busier I feel the more I wish for a little boredom. When I’m faced with boredom now, I make a conscious decision to actually do something productive with the time since it always seems to run out too fast. However, I don’t feel bad one bit when letting it slide every once and while, taking some time to do absolutely nothing.

I suppose the next time I’m bored, or the next time you’re bored, we should take the time to reflect on anything that comes to us in the moment to ultimately push our day, week, and lives into a better direction and less time thinking if it’s possible or not to make a grilled cheese in the toaster.

Jolee McBreen is a student at the Art Institute and whips up delicious coffee concoctions at a coffee shop in Denver. When she’s not avoiding homework or steaming milk she can be caught with her family, friends, snuggling her two adorable dogs, or dancing… pretty much anywhere.