Escapology (n) : the practice of escaping from restraints or other confinement

Shackles. That’s what I’ve known in life. Not the physical ones made of metal, but the emotional and psychological ones that silently cripple you. I was born into a life that didn’t even give you standing room before you hit the glass ceiling.  Your sole purpose in life was to be a wife and bear children. Without these two achievements, your life was not complete. You could have every degree in the world, every award under the sun, and all the money in the world; none of it would matter. You are nothing more than your marital status. I rejected this so, by definition, I was a rebel.

As a precocious child, I realized I had to spend my life energy trying to lift this glass ceiling. I had dreams of college. I was poised for UC Berkeley and Stanford.  God had other plans for me and my six other siblings though, and, at the age of 14, my parents decided to relocate to Amman, Jordan.

My dreams shattered into a thousand little pieces before my eyes over the course of the next few years. By the time I was of college age, two of my sisters had already been married off, one older and one younger, both by the age of 17.  Because of a language barrier, my choice of studies was limited. I enrolled in a local Jordanian university and chose my major as Computer Engineering, unfortunately to the chagrin of my father.  “Women do not study engineering,” he said, “Women study Pharmacology or English Lit?” A fight ensued, yet I stuck to my guns.

I can’t say I didn’t try to fit in.  Two failed arranged betrothals later, the pressure to marry and the ridicule for my single status was even greater.  I was 23 and I was holding up the production line; there were still two younger sisters to be married. “What are you going to do with this Engineering degree, engineer the kitchen?”, my uncle would say, “Get yourself a husband.”  Education for women was considered a luxury and what a woman does to pass the time until she finds a suitable husband.

Amidst all this, I managed to graduate top of my class.  Neither of my parents were there to attend the graduation, unfortunately, but I had achieved my dream of a college degree. I was the first woman in the family to get a college education: the only engineer in the entire extended family, including the men.  I set out into the corporate world with a vengeance. Within a year, I had a very successful career in the booming internet and software business, hobnobbing in the elite social circles of Amman. This would have all been great, had I not been living a lie.

The glass ceiling was crushing me.  The day came when my dad went to my work and asked my CEO to give him my paychecks so they could keep an eye on my earnings. I could see now how the shackles would get tighter and tighter.  I knew I could not last. True to form, on March 3, 2002, after a series of unfortunate events, I ceased to call Amman my home.  I had managed to save enough for a one-way ticket to the United States with $500 left over.  Quite an amazing feat considering Jordan’s annual average per capita income is $1,525.17.  With nothing but my small suitcase of meager belongings and my college degree, I arrived in California to start over.

Seven years later, after starting off in the aftermath of the dotcom bubble, I found myself shackled again only this time as a Vice President of Marketing. The glass ceiling was back to haunt me. This time even though I managed to get all 6 feet of me underneath it, my health had began to fail. I suffered from chronic fatigue, debilitating anxiety attacks, and agoraphobia. After countless doctors and specialists and a drastic 47 lb weight loss, I was told my symptoms were psychosomatic, diagnosed with fibromyalgia, and offered a plethora of prescriptions. I felt a very strong urge to avoid any meds for as long as I could and decided to take matters of my health into my own hands. My entire focus became about healing my mind-body-spirit imbalance.

Through a series of fortunate events, I found myself in a Kundalini Yoga class.  I dove into my spiritual practice as I believed it would save my life. It did. However, I had lost the motivation to save my career. My yoga and meditation practice had opened me up to life and all the creative expression bottled up inside me.   I had started making jewelry on the side.  I soon found just how disposable I was at my job and, after attempting to salvage the remains of my career briefly, I walked away with what was left of my dignity and a mountain of debt to lick my wounds.

Shakti, The Great Divine Mother, opened her doors to me. I was filled with creative feminine power and it gave me purpose.

Shackles be damned. I embraced the Escape Artist in me and built the House of Shakti from the ground up.

What is an Escape Artist to me?

One who starts off life with a Rebel Yell and hopes to end with a ‘Namaste’. 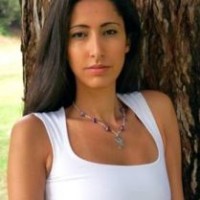 Lana was born in the US to Palestinian immigrants. She is the founder of House of Shakti Jewelry. All of their jewelry and malas are designed for healing and empowerment, and … Read full bio