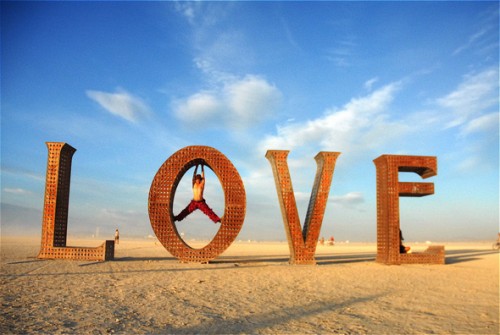 To the outsider, Burning Man can appear to simply be a costume party in the desert.

Defining Burning Man and all it means is an insurmountable task. It truly needs to be experienced. Words can never capture the pure magic that is “the burn”. The closest I can come to defining it, is to say that it can all be boiled down to one simple four letter word: love.

All in all I, personally find Burning Man to be: a love story. It’s a heart opening, soul expanding, awe inspiring and non-stop profound expression of love. There’s a

discovery and deepening of love on all levels on “the playa.” Much of the time, there is an unspoken instant bond that is created between people there. That’s why burners call it “home” and “family.” It’s something about “we both know we’re here to connect deeply.”

On the playa, friendships are formed, relationships are deepened, souls are healed and magic is manifested. It seems every square inch is sacred ground, fertile for planting the seeds of creative collaboration or even a deeply personal union with the Divine. The extreme love that emanates from the people there is astounding. It’s like Heaven on earth. It’s an example of what the world can look like when we all show up as our authentic selves and be recognized by others for our own unique beauty, expression and contribution.  Radical self-expression is the norm in Black Rock City. It’s a chance to truly be our authentic selves.

There’s a sense of awe that overcomes you when you witness the amount of forethought and sheer labor that goes into some of the projects on the playa like the costumes, the structures, the art projects and the art cars. To think, people go to this much trouble for one week a year? There’s something deeper here.

The Temple is the spiritual heart of the festival. This year the Temple of Transition was magnificent. So many come there to pay their respects and release people, relationships and other treasures of life. I felt the deep love and loss that was all around and within that structure. It moved me to tears.

Then on the last night, after the temple was visited by thousands during the week and filled to overflowing with notes of loss, longing, love and gratitude, I experienced the magnitude of tens of thousands of people watching the temple burn for – 20 minutes – in total silence. I thought about burning all that does not serve me and igniting all that does. It was a profound moment of reflection and heartfelt gratitude.

This year I camped with one of the largest spirituals camps, Red Lightning.  I felt like we were the heartbeat of the playa, and the man, as it turns out, seemed to be walking straight toward our camp. We held sacred ceremonies in our tipi circle and hosted the most conscious programming at the entire festival, all day, every day. I had my own ceremony in one of the tipis, meditating on the year’s theme “Rites of Passage” and everything that means something to me at this time in my life. It was heavy.

As burners, we spend the year preparing, then gather for a couple weeks, build a massive city, and then we all break down our camps and “leave no trace,” another principle of Burning Man. Then we all take the magic and union that was generated there and weave it back into our daily lives as evolving forms of tangible abundance and opportunities to be of service.

This all takes place in a scorching desert that takes some skill and planning to survive in. That’s all part of the journey. The empowerment that comes from radical self-reliance, one of the ten principles of the burning man community, is character building, to say the least. You never know when you’re going to be on the other side of the city caught up in some magical distraction when the sun goes down, so you learn to have a bag packed when you leave camp – water, snacks and a jacket. These are good skills that we can bring into our daily lives, or the default world as burners refer it to.

Something that astounds me is the magnified power of manifestation and synchronicity that exist on the playa. Recognizing these cosmic synchronicities is a joyful and awe-inspiring experience. Sometimes the mere thought of wanting something can bring it into tangible form. Other times a word is required, but all too often the universe seems to conspire for our desires to be met with ease and grace. You think of someone, and they appear. You think, “I’m thirsty” and someone shows up and offers you an ice-cold beverage, maybe a swig of beer from a balloon. It often happens in ways you couldn’t have imagined until it does. It never ceases to amaze me.

This year I spent some real quality time at the temple. I took offerings from those who couldn’t attend, prayed and meditated. One day as I meditated there, a friend I never expected to see, approached and gifted me a bottle of love potion. She strung it around my neck, kissed me on the cheek, and tiptoed out of the temple back into the dust from which she came.

Another day as I sat in a deep meditation in the center of the temple, I became aware of what sounded like an entire orchestra set up outside, playing the most beautiful music. I was delighted to find it was actually the Earth Harp that had started to play. One side was actually attached to the temple, turning it into a giant instrument: breathtaking creativity in action. Another day I stumbled upon the Earth Harp again, and this time it was playing over a yoga class of hundreds, all lying down in the dust in final resting pose. It was a magnificent sight to behold.

Some other highlights include venturing to the Oasis project meditation structure with some good friends after getting snow cones, witnessing a unicorn stampede, watching multiple sunrises and stumbling upon the New Orleans steam boat art car, Sassafras, while frolicking with a group from New Orleans. There I ran into someone I had recently written about, someone whose work I deeply respect. I realized, “this is where she comes to plug in and charge up, to go out in the world and do all that great work.”

Another night while staring at one of Andrew Jones’ paintings in his huge dome set up at a sister camp Fractal Nation, I received a download of messages from the universe that are still guiding me on my path each day.

I’m coming to understand that Burning Man is a charging station. It charges people up with inspiration, and community, and love.

Sure, some may show up there for the non-stop party. That’s there too. But I choose to look beneath the surface, and connect to the deeper level that is present throughout the playa. It’s the indescribable, profound, connecting and transformative power of love.

Magda Rod is an ecopreneur based in Los Angeles and the founder of Visionary Consulting & Visionary Boutique. She enjoys being an eco-warrior, activist, Visionary Lifestyle Guide, freelance producer, photographer, blogger, designer, stylist, PR & Marketing guru, yogini, raw chef and mom. Magda writes about topics that move her soul with hopes to inspire others. Assisting social and environmental transformation to help create a world that works for everyone is her mission. Her website and blog can be found at: visionaryactivistnetwork.org