His illusion of the “American Dream” shattered, an enquiring mind seeks the source of truth not steeped in hypocrisy…

Nearly a decade ago, I had the fortune of reading American Holocaust  by David Stannard, which detailed the horrific conquest of Native American culture behind the “founding” of America. I found the very framework of my own cultural understanding thrown asunder. I realized that the “American Dream” had been largely birthed from a nightmare of unimaginable proportions.

I felt like I had been lied to, that the real fabric behind all the myths and legends of America was something else entirely that what I had absorbed as a open-minded youth in school.  I now wanted to know what the truth really was, what truth really meant, and how to grasp a truth whose meaning would not be elusive or steeped in hypocrisy.

My own search for truth took me through many experiences and personal experiments into social justice and progressive philosophy into the realm of the spiritual, where I now live as a monk of the bhakti tradition in New York City.  Yet I feel my journey is far from complete, as the bridge between the spiritual and activist spaces within my mind, heart, and soul feels unwalked to me.

I want to know how I, as a monk, as a truth-seeker, with an open heart, can help to effect the kind of change we need in this world which is not ephemeral, which is linked to the eternal.

This disconnect came to the fore for me as I observed the march forward of the Occupy Wall Street movement over the past few months, its nucleus at Zuccotti Park just a short walk from my own monastery.  I felt both a great inspiration for the courage and clamor of the huddled masses defying the fortress of inequality, yet I also felt a distance, a certain aloofness.  I couldn’t connect, or find a deep personal motivation to become involved, to put my own body on the line.

As a monk, committed as much as I am to the inner spiritual journey, to the revolution of the heart, the realm of the politic feels incomplete without the consideration of the big picture.  I am having a hard enough time occupying myself, knowing that unless I rend asunder my own greed, how can I make any impact taking on the forces of avarice that dominate our world?  As great as the carnival spirit of OWS was and is, I desire a deeper connection, a clear bridge between our determination and our divinity.

A recent piece by Dylan Ratigan at the Huffington Post, titled “This Thanksgiving, Occupy Yourself” , helped to crystallize some of my own feelings and hopes with our grand new social justice movement.  Dylan boldly challenges our own conception of the “villain” in the struggle that we face, asking us to look within the precepts of our own heart and being. He writes:

I would point to the concept of the villain itself as the villain. For a villain, “the other”, lets us avoid dealing with the dark part that resides in each of us.
We all have dark thoughts — individually and as a nation. Fear, lust, anger, jealousy, deceit drive much of our decision-making. Yet, these are parts of ourselves we run away from. As a society, we have crafted a culture and set of institutional arrangements to deny this part of ourselves. This is why it has taken so long to even admit we have a problem of wealth inequality. It’s the denial of the dark part of ourselves.
But diabolical energy is part of human spirit, because we are dualistic beings. You cannot know honesty without knowing deceit, good cannot exist without evil, and life is not life without death. Our challenge is to reconcile all of these forces as they all exist in each of us. Any institutional arrangement that denies this, that relies on images of perfection bereft of the shadow, will inevitably be dominated by the very forces of that darkness. Namely fear of the shadow, ironically.

He quotes from Deepak Chopra‘s The Shadow Effect:

We have been conditioned to fear the shadow side of life and the shadow side of ourselves. When we catch ourselves thinking a dark thought or acting out in a behavior that we feel is unacceptable, we run, just like a groundhog, back into our hole and hide, hoping, praying, it will disappear before we venture out again.
Why do we do this? Because we are afraid that no matter how hard we try, we will never be able to escape from this part of ourselves. And although ignoring or repressing our dark side is the norm, the sobering truth is that running from the shadow only intensiﬁes its power. Denying it only leads to more pain, suffering, regret, and resignation. the shadow will charge, and instead of us being able to have control over it, the shadow winds up having control over us, triggering the shadow effect.

This is a deep, deep spiritual meditation, a call to face the injustice we cause to our own heart, to our own self.  It echoes the tradition of the Bhagavad Gita, which tells us that the only real enemy we face is the vicissitudes of our own mind, and which call for us to find a radical and progressive forgiveness towards those we hope can change for the better in their thought and action.

It is my fervent hope that by occupying the secret yet potentially sacred spaces in my own heart and mind, with the courage supplied to me by the great souls around me in my monastery and beyond, that I will be able to make a humble contribution to the OWS movement and to all the peoples struggling and striving to fulfill our common destiny as a human family.

If we want to give divine solace to the pain so many people are feeling, not being allowed their inviolable right to the pursuit of happiness, we must learn to face the pain within us, and learn to speak the language of forgiveness and transcendence.

Chris is a writer and teacher, currently giving classes at New York University on the living philosophy of Bhagavad Gita, and the culture and art of vegetarian cooking. After receiving a degree in film/video studies at the University of Michigan, Chris began his exploration and study of bhakti yoga. He is a monk of the bhakti tradition and lives in the monastery of the Bhaktivedanta Ashram in New York City. 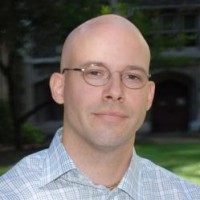