Calamity Jane (Except Not at All). ~ Mikela Rae

And, donkeys are nocturnal and speak Sanskrit.

I just came home after spending four days in the Texas Hill Country, alone with my dogs and a shotgun. I learned so much that I don’t even know where to begin, so I’ll start with a story.

I stopped at the main office for the cabin rentals and paid for my spot. I rented one of the lodges on the creek. It was three miles from the office, and far away from anyone else. I had already asked the receptionist if I would be okay out there alone when we spoke on the phone, but I asked again.

“We’ve only had three incidents in my 16 years out here.”

“Yeah, just last week there was an illegal on my property.”

“They’re just passin’ through looking for food, so just call the cops if you see one.”

I knew I wasn’t going to want to hear the story as soon as she started to tell it. But, I had asked. I was prepared to talk myself out of the rapist and murderers that plagued my imagination, but not very real illegal immigrants, who may swing by in search of food. The hunting stories my ex had told me about how they break into cabins in South Texas played over and over and over in my head. Shit.

I headed out to the cabin and settled in. It really was remote. I mean, all I saw around me was Hill Country. No homes, no roads, no Grizzly Adams who could come rescue me when I screamed. This kind of silence makes your heart ask permission to beat. My own footsteps seemed so loud that I purposely walked as lightly as possible. I could hear the wind a full minute before it ran its hands over my face. Calling for my dogs made me want to apologize to the silence for having been so crude, and I often found myself holding my breath because even it was too loud. I had gotten exactly what I asked for.

I made my fire and unpacked while my dogs went travelin’. I felt at peace in my solitude. I was surrounded by beauty. It was breathtaking.

Finally, it was just me…and the immigrants.

Please understand that I had no opinion about the border issues playing in my head at that time. I wasn’t at all concerned if they were legal, illegal, red, white, brown, etc. My concern was whether I was going to shoot, or give them my food.

As the sun went down, I cozied up in an oversized chair with my puppies and The Alchemist. It was so utterly quiet that the cycles of the refrigerator sounded like a damned freight train. I loved it. The fire popped and whistled, the wind rustled the trees, and a donkey echoed my Oms (really).

Then it got dark.

I remembered that I had every intention of lounging outside under the giant pitch-black Texas sky to see the millions of stars I miss out on in town. Ha. Not happening.

Well, actually, I did go out…for about two minutes. Every time I set foot out the door, I was preceded by my two sentinel dogs. I would poke my head out and gauge their reaction to our surroundings. “Oh my God. I’m gonna pass out.” Going out to grab more firewood could have qualified as an Olympic event (a barefoot event). I learned to stock up as the next evening rolled around.

After about an hour of a rapid heart rate, I tried reasoning with myself: Okay, so say someone comes to the door. Show them your gun (which, I’ve come to realize, is all I would do with it), give them some food, and hope they move on. I repeated this plan to myself over and over.

I’m from the country and find comfort in a gun. I’ve never aimed at anything with a pulse, but I know I’m a good shot. I’m confident in my handling a weapon, and I like the feeling of security it provides me. Deep down, however, I’ve always hoped that whoever was attempting to enter my home would understand the universal sound of cocking a shot gun, and would remove themselves before I had to make the choice to fire. I don’t hunt, but I don’t judge those who do (that would be my entire family, and I’m too busy judging them for a million other things). But, in my peaceful cabin, I almost felt guilty having it loaded and by my side. It felt as if I wasn’t trusting the universe. By the second evening, I was able to leave it in the bedroom.

I wouldn’t have made it two hours into the night without my dogs there. I’m fully aware that they could be quickly taken out with a weapon, or some lunch meat, but it’s the alert that I was counting on. Buuut, my little dog is more of a spaz alarm, and will bark at a large moth. And it’s not a tiny bark. It’s a Tasmanian devil outburst that makes your skin and your heart jump about eight inches from their original position. (“30-year-old woman dies in cabin. It seems…her heart exploded.”)

The truth is that my shepherd dog (the one I would count on to save my life) never barked. Not once in our four days out there. There was one moment when she perked her ears as I was headed out for more wood, and I immediately slammed the door shut and locked it…and then almost threw up. But, it was nothing. It was like she knew that I was truly trusting her judgement, and she wanted to keep me calm.

I had slightly less anxiety as time went on, but I’ll most definitely be taking some Xanax (or a giant, cuddly, bear-of-a-man) with me next time. This fear was real to me, and it was interesting that simply having another person there would have made all the difference. But then this story would be about how I was trying to run their irritating ass off with the gun rather than how I stayed put, regardless of my fear.

As I packed up almost as many grocery bags as I had brought, I did learn a little about myself.

First, I’m not a bad ass in the dark. And second, I would have given my food. I wouldn’t have had the heart to send them on with nothing. Even at the risk of harm, I would’ve been a yogi in that moment. Or, I would’ve just passed the f*&k out. 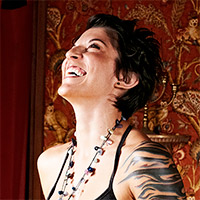