Could Yoga Be Used as a Prescription for Eating Disorders? ~ Anna Coventry

I’ll throw this out there though and see what comes back because as both a yoga teacher and ex eating disordee, this is a subject that I feel deserves a little more airtime.

Even now, in 2013, the eating disorder statistics are off the charts. In addition to those people suffering from chronic forms such as anorexia, bulimia, addiction to diet pills or the new-fangled orthorexia, there are a shocking number of people—both male and female—who have an extremely unhealthy relationship with food.

An unhealthy relationship doesn’t just mean throwing up after every meal. Heavily restricted diets are perhaps more socially acceptable but they too, paint a picture of a poor self-image and a need to control.

The really difficult part of suffering from any kind of eating/food disorder is that it stares you in the face 2 or 3 times a day.  It’s not like having a fear of spiders, where you can largely (unless you live in Australia) avoid having to deal with them. We have to eat to survive so it becomes this crazy mental battle that affects every part of your life.

The worst part is how covert sufferers are, making it really difficult for people to help them until things get really bad.

I’ll leave the reasons why so many people suffer this way for another time (so I won’t mention the fact that most mainstream media companies are still using unrealistic models to advertise products and services, creating a subliminal desire to look like someone we can never be) but I will highlight that eating disorders don’t just affect one aspect of us. They usually begin in the mind and then start to affect the emotions, energy, spirit and of course the body. Surely then, it makes sense to treat with a holistic health system that focuses on the whole person?

My relationship with eating disorders lasted for about 10 years and covered the full spectrum. I’d move from one type to the other, always keeping quiet about my inner struggles and always trying to justify to myself that I was doing what I needed to in order to stay at my perceived physical best (which for some reason resembled Barbie, but because of genetics, without the big boobs).

I’d become so restricted with what I ate that I didn’t get a period for 4.5 years. It wasn’t until I tried yoga at age 27 that I began to heal. On every level.

How yoga helped me.

I noticed a change in how I viewed my body straight after my first yoga class. Of course I didn’t completely revamp my self-image within 24 hours, but I did begin to see myself in a different light. After a couple of weeks of practicing, I started to view my body with a foreign thing called respect and after a couple of months of regular practice, I began to listen to what my body was asking for and changed my diet accordingly.

This was an entirely new phenomena, given I usually ate only what my mind decided upon, and as a result I went from being underweight and miserable, to healthy and light.

So how exactly does yoga help?

Where do I start?

The physical postures in yoga help to bring everything back to a place of equilibrium. This is particularly relevant with the endocrine system, a group of glands that control many of the important bodily functions. By the squeeze and release effect the postures have on these glands yoga can help regulate metabolism, appetite and menstrual cycles, all of which are affected by eating disorders.

The awareness that a person develops through a yoga practice can help their relationship with their body. It leads them to realize exactly what their body is doing for them every day, and more poignantly, what it is capable of. This increases the desire to respect and honor the body and this alone can be transformational.

In addition to all the physical benefits, yoga facilitates improvements on an energetic level. Eating disorders can often create blockages within the energetic system resulting in a dull, lethargic quality. The postures actually unblock and shift that energy, resulting in a much lighter feeling overall.

On a mind level, yoga increases awareness. We become more aware of how we breathe, how we move and eventually, how we think. We can only change something if we are aware of it so yoga creates opportunities to challenge negative mental patterns around body image and begin to change them.

Meditation is not always incorporated in to yoga classes and while I think it should be, at the very least you always get the opportunity to relax at the end of class. Relaxation is a profoundly important aspect of healing—of any kind—and is not ordinarily something we go around doing.

Yoga is an art form. Yoga is a life science. Yoga is an ancient health system that should be used more widely as a modern day healing modality, particularly for issues of a mental and emotional kind.

So, do you agree? Could yoga really be a prescription for eating/food disorders?

I obviously think so. 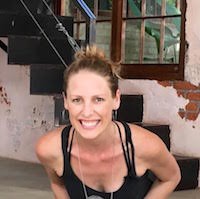