The Cost of a Mysore Practice.

Oh my. Let the shit-storm begin.

(I love The Confluence Countdown, by the way! And the question seemed innocuous  enough to me.)

But first, let’s check to see if this is the going rate. After a random Google search from across the country, here’s what I discovered to be the average pricing for monthly unlimited Mysore:

But I’ve heard from many people since this was posted.

Those who teach and/or practice Mysore style yoga felt this question was somewhat accusatory, as if there was some intention to gouge students. And those who are not regular Mysore students or have never stepped into a Mysore room were understandably stunned, especially given that many studios offer unlimited led classes for ridiculously low prices.

Now I’m just a writer and yoga teacher. I’m in no way a business expert, so you’re going to have to cut me some slack here. This is my explanation in extremely crude terms and based on Washington, D.C. standards as I know them. But since the question has been raised, I’ll do my best number crunching.

In a  three hour period, a regular ol’ studio can run two classes and pack 30 to 40 people into both classes (so that’s 60 to 80 people total) of at which at least 10 will be drop-ins, paying the maximum amount. The average person in a led class pays about $10 a class and a drop in is about $20. And let’s just say that the two teachers are paid $75 a class.

That’s an okay profit for a studio (you do the math) and the teacher is paid fairly for those 75 minutes. The students in an all-levels led class come from a very large pool and typically practice yoga three to four times a week, so paying $10 per class doesn’t seem unreasonable either.

Ashtanga studios are different, and in particular, any studio that offers Mysore.

Because in that same three hours, a Mysore program brings in an average of 25 students. Less students over a much longer span of time means more individual attention for students and less revenue for the studio and teacher.

And of course, the teacher works much longer hours and in many cases, makes almost the same amount as a teacher leading a 75 minute class. I mean, a class is a class, right?  Of course not!

Mysore teachers typically have about ten years experience. They must practice themselves either before or after teaching every day. Most of them practice before, which means they wake up at 3:30 a.m. to arrive at the studio by 4:30 a.m. (and have incredibly tolerant spouses or significant others) then run a room for three more hours. By 9:00 a.m., these teachers have put in about five hours of straight up manual labor.

(I filled in for a teacher for a little over a month and that was all the time it took to show me I am not cut out for that role—and God bless those who choose to dedicate themselves full time.)

The bottom line is: no matter how you look at it, this is not a profitable venture.

Rent is high, students are limited and teachers work long, hard hours. I mean, when you look at the facts, I wonder why any sane and rational person chooses to run this type of program.

All in all, this is really an awful business model and yet, an absolutely brilliant yoga one!

Because Mysore requires students to be truly committed and invest in their daily practice and growth, studios who believe in more than just making money are dedicated to deepening learning opportunities regardless of cost and teachers are devoted and tirelessly want to serve a community (or live off trust funds).

Let me return to the original question: Why does $180 to $185 seem to be the going rate for a monthly membership to Mysore?  Well, I don’t think it is, actually.

In Greenwich, Connecticut and many other places, Shalas are ceasing to exist because they are almost impossible to make profitable. Some don’t even break even. Trust me, no one is going to get rich by opening an Ashtanga studio or running a Mysore program, so unless they are viable and sustainable, they will go away.

This model and the teachers I’ve learned from have changed my life in ways unquantifiable. It makes me so sad when I see a studio close or hear from students who have no program or teacher close by. And so if $180 to $185 (luckily in DC, it’s only $160!) is the magic number to help a studio sustain a program and provide for a qualified teacher, then please, just tell me where to write my check.

It is important to note: nearly all studios reserve the right to discount membership prices based on need and circumstance. I have never known a studio, Ashtanga or otherwise, to turn away a student in need. 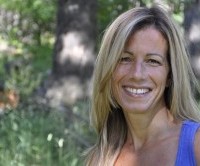 With a gentle warmth and contagious sense of humor, Peggy shares her passion of life and love with all those she meets. She was a counselor for many years before stumbling upo… Read full bio