The Art of Play: When Did it Become a Luxury to Simply Be Outside? 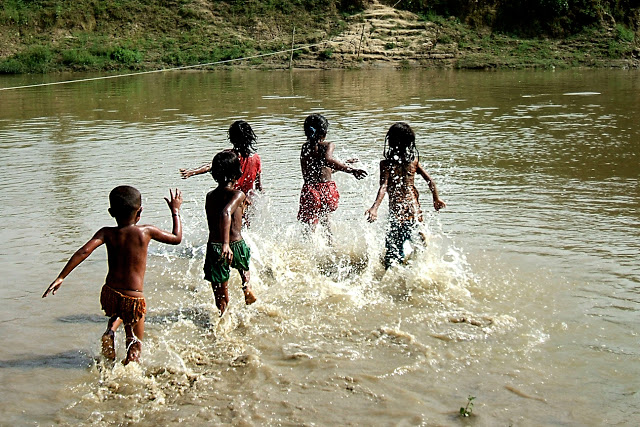 Walking the dogs in the woods today, I had what I consider an absurd conversation.

Me: “I can’t believe not one other person is out here. It’s so beautiful!”

My husband: “Did you ever hear of those things, those light screen lamp thingys that people put on their desks if they’re vitamin D deficient? They’re only, like $245!”

Yes, that’s me saying “dude” and disparaging the use of “light screen lamp thingys”.

When I was a kid, it was my greatest joy to roam the fields and forests with my black and white English pointer. He would zip in large loose circles around me, foraging, smelling and scouting. Every now and then he would pause, front foot raised, nostrils quivering, his tail extended like an over-sized finger pointing urgently to a hidden something.

Usually I never had a chance to find out what that something was, but occasionally a pheasant would rise in a great flurry of feathers from the tall grass, or some other animal would pop out disturbed from its hidey-hole.

When I grew up, like a lot of people, I inexplicably stopped running around outside and instead started going to the gym. Ah the gym, what a perfect purgatory of wasted energy, fluorescent lighting and the inescapable knowledge that no matter how hard you try, you’re walking out of there with someone else’s sweat molecules attached to your body.

On my way to the gym, be it on foot when I lived in New York or by car when I moved to the ‘burbs, I would lament the lack of time I had to be outside.

Look, how sunny and bright and gorgeous it is today, I would think mournfully as I pushed open the gym door and my ears were assaulted by the endless groans of ellipticals and my nostrils quivered (not unlike my dog’s) at the distinctive rubber and chlorine stench that pervades “health” clubs.

I’d climb on a Stair Master or whatever, making sure I was in front of a TV that was tuned to Oprah, and slog through my hour of cardio, keeping an eye on the “calories burned” display at all times. Because that’s what I was there to do: burn calories. I wasn’t there because I enjoyed it (obviously), I wasn’t there because I got into a transcendent state of mind climbing make believe stairs, I wasn’t even there to feel the simple joy of moving my body—the one and only reason I was there was to make sure I didn’t get fat.

Lord have mercy on me and all of those sad, irreplaceable hours.

Gladly, in 2001, my dad booked a cycling trip to Spain with my sister and me. It was 10 days of cruising around Cordova, Granada and Seville and all their attendant poppy fields and ancient architecture. It’s a beautiful country and if memory serves, I did not see a single gym—or for that matter, an over weight person.

By the time I got home, the seed had been planted.

I still worried about how many calories I was burning and felt more comfortable if I had a computer display affirming that number, but slowly I began to allow myself the luxury of “working out” outside. I put working out in quotes, because when I’m outside, it just feels like playing.

In between cycling or walking in the woods, I still dragged myself to the gym (or as Homer Simpson famously said, “The Gym, pronounced GYME.”) I had weightlifting to do (because muscle burns more calories than fat) and yoga (because the yoga students looked sleek, so something calorie burn-y must be happening there). But it always killed me to open up that health club door and leave the big blue sky behind—or even a grey sky, or any color sky, because—and this is what I finally figured out—for me, outside is always better than inside.

Maybe it’s because I’m older, or because I finally understand what yoga is really about, but somewhere along the line I stopped worrying about calories and began to trust that if I moved my body daily everything would be okay.

I also began letting my instincts guide me as to the form of movement I might do.

Do I just want to walk? Fine. Do I want to climb on my bike and pedal through the nature reserve? Good. Or do I, because I still crave these things as well, want to feel the solidity of weights in my hand as I push and pull, and heft and heave? Do I need to unroll my mat, inside, outside or upside down?

The point is, we shouldn’t just be “working out” our bodies.

If we go to the gym only to force ourselves to weigh a particular number of pounds or fit in an unforgiving pair of jeans, we are sacrificing hours, possibly the most joyful hours of our lives, to self imposed oppression and slavery. So, it’s not really about where you do it, but the motive behind what you are doing.

That said, being outside is the easiest (and cheapest) way to do two things: 1) move and 2) feel joyful.

When I hear about people needing to put sun lamps on their desks because they are so deprived of natural light, my heart breaks. I get that we are busy, we have jobs and responsibilities and lives, but when did it become a luxury to simply be outside?

I say, better get it while the gettin’s good.

We’re not going to live forever. Take a few minutes today and go outside and play, dammit! And while you’re at it, grab any stray children, dogs, friends and spouses and take them along for the ride. If it’s raining, jump in puddles, if it’s snowing, build a fort and if it’s sunny, smile a secret smile to yourself because there’s no sunlamp bogging up your desk space.