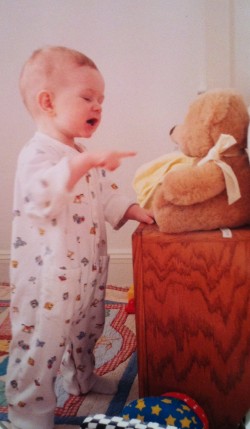 I am the lucky mother of three delightful children—respecting them and making sure that others show them respect is something I feel pretty passionate about.

I’ve always been perplexed about why some people feel that it is okay to touch, hold or photograph babies and small children who they don’t know.

It’s gotten better now that my kids are older, but when they were small, I was constantly on the look-out for generally well meaning people who went ahead and entered my children’s personal spaces or touched them without ever having met them.

Admittedly, I know that most of these people had the best of intentions, and yet the way that they assumed that it would be alright to touch them was something that I could never understand. So I have decided to write an article about this very topic.

1. If you are meeting a baby or child for the first time, or you run into a cutie pie in public, please don’t touch them until they know you, even if you’re related.

Babies and children are small people who deserve the same respect as adults. The vast majority of people I know wouldn’t touch or hug a grown person upon meeting or running into them in a store or the like. I feel that the same should be true for our little ones.

I can’t imagine having another person that I had never seen before pinch my cheeks and tell me how adorable I am! My opinion is that this is an invasion of a child’s personal space,

I was once shopping in a store with my first-born. He must have been about nine months and was in his stroller. A nice lady approached him and started ooing and ahhing over him, which I thought was incredibly sweet.

But then, she got up really close to my son, tousled his hair and said, “How are you sweet thing?” He immediately tried to back away but there was no where to retreat to as he was helplessly strapped into his stroller. He was a sitting duck. He ended up screwing up his face and gave her a look that could kill. And her response? “Well, I guess your baby doesn’t like to shop very much. Now does he?”

I was a new mother and because I didn’t know better, I let it pass, but I still remember the stinging guilty feeling that I hadn’t done enough to protect my own child.

Since then, I have honestly noticed that many people are more likely to ask about petting a dog than they are about touching a baby or a child.

2. Please don’t ask if you can hold someone’s baby unless you know them well.

Yes. the baby might be in a great mood and smiling at you, but this does not mean that they want a stranger to pick them up and carry them around for a cuddle.

This can also put a new parent in an awkward position. Most people don’t want to be rude when a person is generally trying to be nice, but I’ve never wanted a stranger to hold my child. Even for a Santa Clause photo—it just didn’t sit well with me.

I believe it is good to be cognizant about trying to see it from a baby’s perspective. If I wouldn’t want to sit on a stranger’s lap or be held by them, then it is a good bet that a child wouldn’t enjoy that either.

I especially had problems with my daughter, who is my second child, on this account. She would smile at everyone and wave backwards in a way that melted hearts with her apparent beckoning gesture. Everyone would swoon and swarm to her. I had learned by then that carrying her in a sling was the best way to make sure that people didn’t come too close for comfort.

It was interesting to find that because others would have had to invade my personal space, they left her alone when she was in a sling.

3. Please do not take or post pictures of a baby or child without asking first.

Oh boy, this can be a big one for some parents, especially if another person puts your child’s photo on the internet without asking before hand.

I ran into this problem in earnest when traveling in Japan with my then seven-year-old daughter and her best friend who both have white-blond hair.

Yes, I can understand that this is unusual there and that people might want a photo as a memento, but it was unwelcome attention for the kids, who felt a more than a bit uncomfortable. I learned quickly that the sign for no photo taking was making the letter X with my two index fingers.

In addition, this can happen when there is a sporting event, birthday party or other occasion with group photos. Certain people are comfortable with their child’s photo on social media, but what about the parents who don’t feel the same way? I think it is polite to always ask the other parents first before I push that post button.

I have even been guilty of this as my children are older and it doesn’t feel like such a big deal, but I have other friends who simply don’t want their children’s photos on the internet and it is understandable. I think it is wise to respect their wishes and it is so easy (and good etiquette) to ask before posting a photo that includes their child.

Most people do have the best of intentions, but children have so much less control over what is done or said to them.

I feel we need to be even more careful about the words we say and our actions towards little ones, who are just as complex as adults when it comes to having opinions, likes and dislikes.

I’m sure that if young people had the ability and courage to tell people how they really felt about this topic, it could get quite interesting.

My hope is that this will bring a little more enlightenment concerning the feelings and rights of babies and children. We were all young once and if you can identify with any of this, you will be giving these small, yet equally important people a huge gift of respect.