My Moment of Un-salvation with Amma, the Hugging Saint. ~ Tommy Rosen Some 15 years ago, I arrived at an auditorium where Amma, the hugging saint, was giving darshan.

This exceptional woman, whose life has been spent in devotion to humanity and the Divine, travels the world hugging literally tens of thousands of people in a single sitting. Sometimes, these sessions can last 24 hours or more.

Many describe the experience of receiving a hug from Amma as transcendental. Some have seen visions. Some who have had difficult relationships with their mothers have found healing. Others have been so profoundly moved that on the spot they have dropped whatever else they were doing to become an Amma devotee.

I met several Amma devotees while waiting to receive my hug. They were very enthusiastic, and upon hearing that this was my “first time,” they exhibited a sense of shock that gave way to a starry-eyed smile suggesting that they knew something about something, which I knew nothing about, but about which I would know something soon.

They were simply thrilled for me.

Over the course of the five hours I stood in line, my thoughts focused on the upcoming hug and how to do it correctly.

How should I hug her?  Wait, I’m not hugging her, she is hugging me. Wait, we will hug each other. No, she is Amma. Mother energy. Let her hug you, Tommy. Where will my head go? Over her shoulder? Maybe I should turn my head and place my cheek onto her chest?  Yes, that is what a son might do. Do that. Try not to think about it, Tommy. She knows what she is doing, for God’s sake. Just show up there in front of her, let go and the rest will take care of itself.

I feel comfortable hugging just about anyone. And I love it when someone really hugs me with love and affection. It’s great.

I started to get kind of excited—giddy even.

As I approached the front of the line I had a good vantage point of how others were doing it. They all sort of kneeled down in front of her and fell into her arms and she embraced them for about five seconds, and it was done.

Some of them held on a bit longer maybe 10 seconds, but you could tell from many of their expressions that they had really felt…something.

Suddenly, I was there. I smiled at Amma and knelt down to be hugged. I turned my head and placed it down onto her chest. I could feel her arms starting to come around me just when one of her disciples came up and took her attention away from the matter at hand, which, of course, was my hug. While her arms did actually close around me, her distractedness was palpable.

You know that feeling of a handshake with someone who puts no energy into it? It feels like you are squeezing a dead fish. This hug felt like that.

It was the flattest, weakest, most disconnected hug I’d ever received.

When it was over, I stood up and tried to do my best impression of a person in rapture because now my ego had taken over.

“I just waited in line for 5 hours to get a shitty hug from Amma the hugging saint. Christ, what does that say about me? No one can find out about this.”

I wandered off with my mouth agape, shaking my head as if to say, “Wow. Just wow!  Words can’t express what just happened to me.”

I’ve gotten good hugs and bad hugs in this life. I’ve received teachings from gentle teachers as well as from harsh teachers. I have come to understand that everything in life happens ‘for’ me and not ‘to’ me.

There is a lesson in it all.

Here’s where I have come to in my understanding of what happened that day: Amma did not soothe me. She did not give me what I had expected or even hoped for.

That awkward hug provided me with a disappointment.

I had appointed Amma as my savior if only for that moment. And, while I believe Amma is an avatar, she did not save me because she cannot save me. No one can save me—not my sponsor or yoga teacher or meditation teacher, not my family and not my friends. They are all important, necessary in my life, but my salvation/realization does not ultimately lie with anyone except me.

We are going to have to learn to save ourselves.

Or put another way, we are going to have to realize that we are already saved. Having an enlightened teacher to guide the way is one of the greatest blessings one can have in this life, but a teacher can only guide and inspire, which is exactly what Amma did for me that day.

If nothing else, she taught me that I did not need that hug and that will go down for me as a profound teaching. 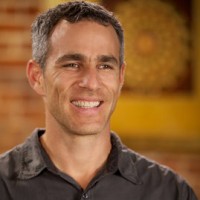