I Had My First Orgasm on A Bicycle. {Adult} 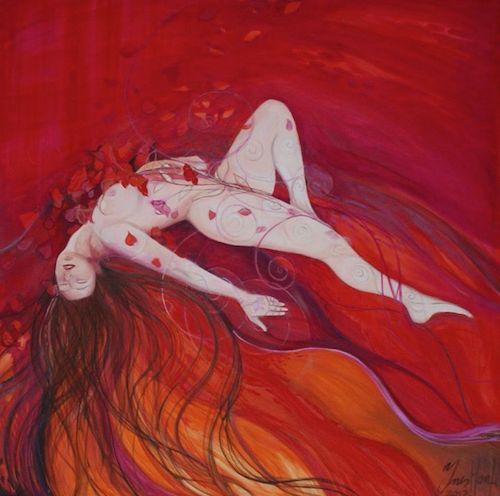 I had my first orgasm on a bicycle.

I know, it sounds kind of strange, but I’d like to think many women did. (Please, back me up, girls!)

At the age of 12, I realized that when I rode my bike down the biggest, bumpiest hill on the dirt road near the farm where I lived, there was this lovely vibrating sensation down there that felt really, really inexplicably good, the best physical feeling I’d ever known until then: warm, fuzzy and immensely pleasurable for up to 20 seconds or so.

However, it only worked when I flew down the hill as fast as possible, without hands on the handlebars!

So quite early on, orgasm for me was an exhilarating, yet highly addictive adventure.

One time, as a teenager, flying down a suburban street on my trusty bike, eyes closed in orgasmic ecstasy, I got a rude awakening when I suddenly crashed into the back of a parked car. Hard.

Turns out orgasms can be dangerous sometimes too.

I was a little more careful after that, but still continued to seek out the perfect hills for maximum clitoral stimulation, nearly crashing again on a number of occasions.

Then I discovered the electric toothbrush-cum-vibrator, which served me well for years. This was my routine: I’d press it hard against my clitoris, clench my legs tightly, contract all the muscles I could and breathe either really shallow or not at all.

First came the fast build up, then the point of no return, then finally that short, sharp explosion of pleasure that I so craved. Sweet release. My record from switching the toothbrush on to reaching that familiar, comforting clitoral climax was about 18 seconds. Sometimes I’d even have a few in a row. The ultimate sleeping pill.

But something was missing.

It wasn’t satisfying on a deeper level and I could rarely reach orgasm with a partner. I needed that damn electric toothbrush!

However, I discovered quite a few years ago that clitoral orgasms are not the only kind of orgasm that exists, and maybe they’re not even that beneficial for us long term.

In fact, clitoral orgasms are the most superficial, surface level orgasm a woman can have. The most powerful orgasms happen on the inside or in the whole body. Focusing only on the clitoris tends to make us feel tired or drained afterwards—often after one orgasm we want to stop, we become super sensitive there, it’s “too much” to continue.

Not to mention that if we only focus on the external part, how will we ever learn to awaken the sensitivity on the inside?

I once went to a Tantra lecture about orgasm for women where the lecturer outlined 54 different specific variations of female orgasm, some of them not even involving genitals! Now, I can’t say I’ve experienced all of those or that I completely believe it’s possible to have 54 different kinds of orgasms, but it does give us a slightly more expansive view than the generic clitoral friction model.

There’s the g-spot orgasm of course, then the lesser known a-spot, the u-spot, the cervical orgasm, the cervico-uterine orgasm, other orgasms in the vaginal canal, then whole body orgasms, nipple orgasms, and the list goes on.

In the end, however, it’s less about counting different kinds of orgasms or having orgasms and more about being orgasmic.

Men are not left out of this orgasmic bliss-fest either.

In traditional Tantra, men eventually learn not to ejaculate, but to rise the sexual energy up through the body and use it to realize their full potential, as well as have other kinds of orgasmic states.

Though generally it’s more challenging for men to experience multiple non-ejaculatory orgasms, it only takes time, knowledge, commitment and continuous practice, as well as letting go of the attachment to ejaculation. You basically need to trust that something else is possible.

I’ve had men tell me that since they learned how to have full body orgasms, they have no interest in ever ejaculating again. Ejaculation just became boring for them in comparison.

I remember being shocked to discover that ejaculation and orgasm are two separate functions, occurring in different parts of the brain and that the ejaculation actually prevents further orgasms through the abrupt ending of the sexual experience.

It’s not all about orgasms though.

I believe most of us have access to just a tiny part of our full sexual potential. Most people I speak with agree that one of the most ‘spiritual’ experiences of their lives, the most connected they felt to something transcendent, was during a special sexual experience with someone they love.

If we acknowledge the power of this sexual energy and rise it up though the body, instead of losing the energy in a few seconds of pleasure in ejaculation or clitoral friction, we can become more whole, conscious, blissful, ecstatic and connected human beings. After all, sexual energy is that which creates human life itself—it must be powerful stuff!

Why are extended states of orgasm so important?

During moments of true orgasm, we practically cease to exist. We are blasted into sweet oblivion, we become one with the universe, the mind disappears completely, all boundaries are dissolved and there is no more separation. That’s why the French call orgasm ‘le petit mort’ or ‘the little death’.

On the other hand, when we really move towards a place of sexual wholeness and connection, when we experience prolonged states of orgasmic bliss, then suddenly we notice other areas of our lives become more flowing and peaceful—stress disappears, we feel more connected to loved ones, even work is more bearable than usual, we feel more open towards life!

I’d even go so far as to say that if people were all having profound, deeply fulfilling sex, there’d probably be no rape, fights or even wars.

Who wants to kill anyone when you’re busy ecstatically dissolving into the vastness of the universe?

May we all experience ecstatic orgasmic bliss that gives us a taste of the infinite world beyond our limited ego, and eventually remember that this state of bliss is our true home.