On Being a Man in Prison. ~ Will Horst 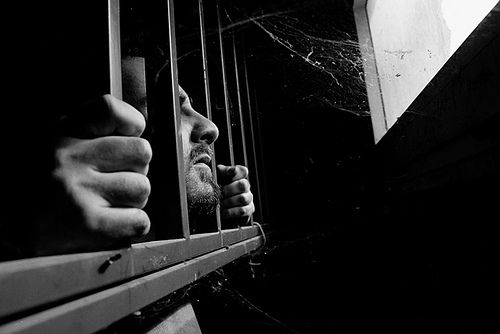 When I was 19, I went to prison. It was no place for a sensitive, artistically-inclined man, yet there I was.

I had to adapt. I found myself in the middle of what seemed an emotional dead zone, where kindness and vulnerability—qualities generally considered feminine—were seen as weakness, and callousness and hardness were seen as strength.

What I did to get there was I walked into a department store with a friend, hid in a storage area and waited for the store to close. After it closed, we went “shopping.” I won’t try to justify it. We were committing a crime, and I fully understood that. It was more of an adventure than anything else, something to laugh about, like a practical joke. Can we do it and not get caught—in that vein. But we did get caught, and I spent the next year and a half in a state prison.

Inside, I found myself surrounded by angry, fearful men.

Many had no real idea what it meant to be a man, other than to pretend. I learned that I had to display fearlessness. If you show fear, it will be measured and exploited. I found it helped to hold my anger near the surface as a kind of ready artillery. It kept the wolves from circling.

My biggest problem was that I had always been a loner. It wasn’t that I didn’t have friends, but I was slow to form alliances and friendships. This made me vulnerable. I became an easy target for what I came to see as weak-minded young men who wanted to be seen as hard-asses in the eyes of their compatriots. I learned some important lessons about courage and not being intimidated by those who rely on membership in a group to give them their strength.

My experience in prison, overall, had a demoralizing effect on my sense of self as a man. I found myself fearful much of the time. It wasn’t a physical fear of being harmed or raped, even though those things can and do happen. It was more a fear of being called out in some way, challenged and overpowered psychologically. It’s a fear of being diminished and belittled, of being seen as weak or effeminate—of being seen as less than a man.

After a few months, when I was no longer seen as a flight risk, I applied for and was given a job working outside the walls at what was known simply as the dairy.

The dairy provided milk and some meat for the population. I worked there for a year, cleaning up after the cows, helping feed them and most importantly, milking them twice a day. I found each of my cows had a distinct personality, some responsive to my touch and happy to see me, others not so much. One was downright mean and often tried to kick me. She caught me square on the nose once and knocked me unconscious. I helped in the delivery of many newborn calves and helped care for them, fed the sick ones with a baby bottle. Working with these animals was a powerful, elemental experience for me of living closer to nature in a setting that was anything but natural.

The main supervisor at the dairy was a man by the name of Mr. Vaughan. Mr. Vaughan was a lifelong farmer who still worked his own small farm in the evening and on weekends.

He called me Dutch because of my Pennsylvania Dutch background, which endeared him to me.  He was a good-humored man and dealt with his charges with disciplined justice and fairness. I admired his calm, steady demeanor in all circumstances. He often chided me for my temper, especially when dealing with recalcitrant cows. It made me want to be more patient in other respects, and sowed the seeds in my heart for what years later I came to understand as mindfulness. I saw in him a way of being in the world that seemed to me worth striving for.

Our culture undervalues the significance in a young man’s life of mentors. It often happens by accident.

A boy will choose a mentor, whether the mentor is aware of it or not, and look to him for guidance. I never forgot Mr. Vaughan. He mentored me without ever knowing the effect he had on me.

Many men in our culture never fully make the transition to manhood, becoming boys in men’s bodies instead. They live their lives afraid of appearing weak, always unsure of themselves. Ambivalence, uncertainty, weakness are all things men in our culture are taught that they must hide. They masquerade their fear with threats of violence, reveling in intimidation and emasculation of men they see as weaker than themselves.

They experience a kind of pseudo-strength in the control and humiliation of the women and children in their lives. On a vaster, worldwide political scale, this fear and uncertainty finds its expression in war and the subjugation of weaker nations.

It shows itself in statements from our political leaders like; we must not let ourselves appear weak. We must take a stand with a show of strength. We must not let other countries think they can push us around. Statements like these could be taken nearly whole cloth from the mouths of prison thugs, gang members or bullies at a schoolyard playground. It springs from the same ambivalence about oneself.

The problem with manhood in our culture is that it’s a vaguely defined status.

You’re never sure where you stand. In so-called primitive cultures, when a boy is initiated into manhood, the older men of the village accept him into their esoteric enclave. The boy sees himself through their eyes, and in their eyes there is no doubt that he is now one of them.

Doubt in that sense never becomes part of his psyche. In our culture, our collective uncertainty of what makes a man is revealed endemically. It shows itself in the critical expressions to any man expressing doubt, fear or vulnerability of any kind. Man up. Grow a pair. Don’t be a pussy. Your manhood is always vulnerable to challenge, and hence, to doubt.

Prison can be seen as a microcosm of what is wrong with our culture in its attitudes toward men and the passage of boys into manhood. In a sense you could say that prisons represent our culture’s shadow self, where we lock those disagreeable aspects of the collective psyche into outer darkness. Young men with their wildness and their testosterone are difficulties to be dealt with harshly, and so today we have more young men in prison per capita than any other country in the world.

Our culture is not free.

We speak of freedom, but it’s only an idea. We’re not free within. We’re prisoners of our own feelings of inadequacy as individuals and as a nation. We have no mythology to guide us in initiating boys into manhood, and so are unable to embrace the wounded child and guide him to wholeness.

We are today a culture which has resigned itself to the belief that we don’t have the power to heal ourselves and each other. Indeed, or that there is even a problem at all.