Paths Are Many, Truth is Vegan. ~ Tracey Narayani Glover 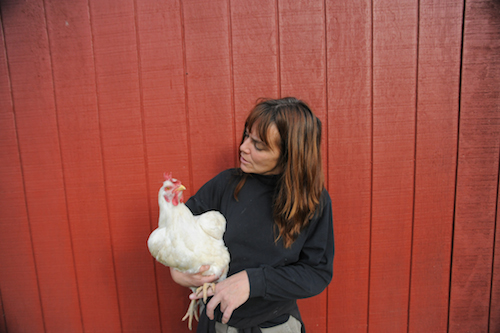 Veganism is the philosophy and way of life that seeks to avoid causing harm, or in any way exploiting other living beings of any species.

Whether we are seeking truth in the word of Jesus Christ, Moses, or Mohammed, Krishna, the Buddha, or the scientific method, the sages tell us that we will all eventually get the same answer—many little streams flowing inevitably into the same great ocean of truth. The ancient Indian text of the Rig Veda says, “There is one reality, the wise call it by many names; there is one truth, reached by many paths.”

So what is that pinnacle of spiritual wisdom? That ultimate truth into which all of our diverse paths will merge?

Love with a capital “L”.

From that mind-blowing insight otherwise known as enlightenment comes a natural desire to want to end the suffering of others and a commitment to live our lives in a way that does the least harm to all other beings.

In other words, the ultimate truth, which we are all destined to discover, is a vegan one.

The motto of the American Vegan Society is “Ahimsa lights the way,” referring to the principle of non-harm that is the foremost of the yogic ethics as taught by Patanjali in his yoga sutras. Vegans abstain from eating animals, any animals (and yes fish and chicken are animals) as well as the by-products of animals including dairy and eggs (which probably involve more cruelty than even the meat industry). They also reject all other forms of exploitation including using animals for fashion, entertainment, or research.

Veganism is a way of life that seeks to treat all beings with love, compassion, respect and integrity.

It is a reflection of Divine Love and a way of life that respects the interconnection of all beings. The laws of the Universe show us that when we live with respect and compassion for all others, we all thrive. When we ignore that connection and disregard the welfare of others, we all suffer. Unfortunately, the paradigm of our current society is not one of Compassionism but that of commodification and exploitation of the non-human animals and the environment.

We are suffering for it.

Not just the animals.

Twenty million people worldwide will die as a result of malnutrition this year. Yet, 100 million people could be adequately fed using the land freed if Americans reduced their intake of meat by just 10 percent. In theory, the planet can feed about 9 billion people, but not when half the world’s crops are used to feed livestock and over 30 percent of the planet is used to raise livestock, as is the current state of affairs.

The standard American diet (SAD) is not only contributing to world hunger but to our own high rates of the “diseases of affluence,” those diseases that affect people in wealthier countries due to over-consumption. These are the diseases it seems no one escapes some kind of personal connection. They include many types of cancer like breast, colon and prostate, as well as Diabetes II, stroke, Alzheimer’s and heart-disease.

In contrast, the less meat and dairy we eat and the more plant-based foods we eat (like vegetables, grains, beans, fruits, seeds, and nuts), the lower our risks of these same diseases. 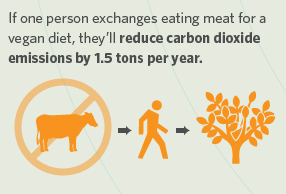 Seriously, eat your vegetables, and no one gets hurt!

Not only is a vegan diet the healthiest diet for our own personal health, but it turns out it’s the only diet our planet can sustain.

That’s on the authority of the United Nations. In a 2006 report, the U.N. said raising animals for food generates more greenhouse gases than all the cars and trucks in the world combined. Nearly half of all water in the U.S. goes to raising animals for food. A vegan diet requires only 300 gallons of water a day. Whereas, a meat and dairy based diet requires over 4,000 gallons! That’s just the water waste.

Giving up animal products in our diets is probably the single most important action we can take to help save our planet.

Yet the most disturbing aspect of animal agriculture today is the way we treat the billions of living beings we kill for meat, eggs and dairy. Factory farms and slaughterhouses are nothing short of hell for the sensitive, feeling and intelligent creatures we have chosen to think of as food—from whom we have thereby disconnected completely.

We have abandoned these utterly helpless creatures to dark and bloody places that most of us would never have the heart or the stomach to visit. For the entirety of their unnatural lives, animals on factory farms endure constant physical pain and mental torment with no hope of kindness or relief until the mercy of death comes to free them from their misery.

Small “humane” farms are certainly better, but there are some cruelties that are unavoidable in an industry based on commodifying, exploiting and killing other living beings.

For example, whether our eggs come from battery cage raised hens or organic free range hens, male chicks, those tiny, fuzzy, adorable babies, are routinely gassed or ground up alive just days after birth because males are useless to the egg industry, whether organic or not. That’s 200 million baby male chicks discarded like trash every year. Male dairy cows have a similarly wrenching fate.

In total, we kill about 10 billion land animals in the U.S. annually.

All things are interconnected.

When we live a life of compassion and Love, we create harmony and balance in the world. When we live without regard for other beings, we harm ourselves as much as we do them because the great truth is that we are not separate. Within the world in which we live—one of violence to all species, industrialized factory farming, an environmental crisis, persistent domestic hunger, world starvation and an epidemic of the diseases of affluence—there is only one adequate response:

That is Divine Love.