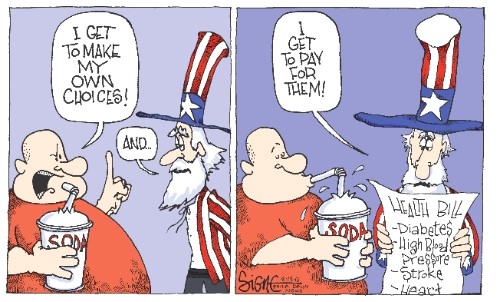 I’ve been reading Marion Nestle’s Illustrated Guide to Food Politics, Eat Drink Vote. I highly recommend reading it. It contains selections of cartoons from the vaults of The Cartoonist Group. Essentially, Marion narrates and then includes a bunch of well drawn political food cartoons that discuss the same topic. It’s a fun, fast read and remarkably powerful.

That’s the impact of effective cartoons.

Her book inspired me to do a post in a similar vein. Here are a few political food cartoons with my brief narration.

Crops Grown for Ethanol Instead of Food

A large contributor to the increase in food prices is that the US government mandates increase the percentage of ethanol to be mixed with gasoline. Unfortunately, it is debatable whether or not ethanol even adds to our energy supply at all, with my sources firmly stating that it does not. What is not contentious is the result.

By 2012 more than 40% of corn grown in the U.S. was used to produce ethanol instead of being used for human consumption. This drives up food prices. Not only here in the U.S., but global food prices as well, which is a huge contributing factor to the unrest that is occurring in many unstable countries. There is no debating that fact. My personal belief is that increasing the ethanol content in gasoline was a poor decision.

In 2012, the U.N. actually urged the U.S. to stop the ethanol mandate. Different U.S. industries fall on different sides of the argument due to their respective interests. To learn more and formulate your own opinion, research ‘Food Versus Fuel’ for the latest on the debate. 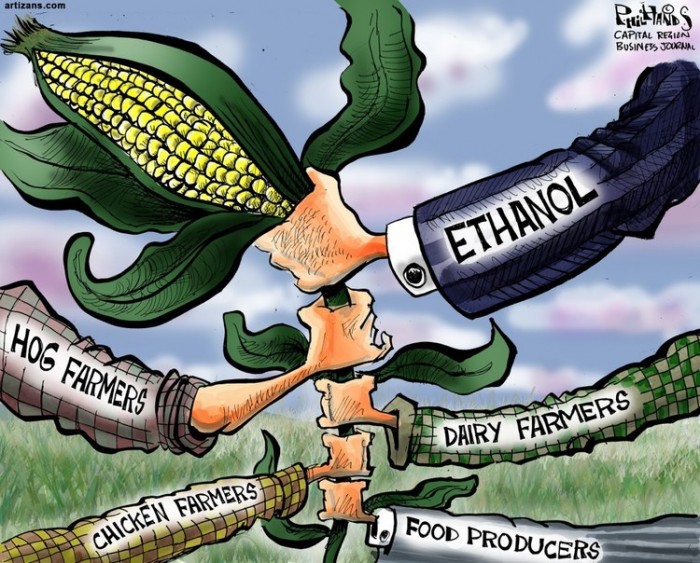 Companies actually pay for prime shelf location—company sponsorships of health initiatives/charities/sporting events (however ironically), and even populating our schools. Yikes!

Children have become a high priority for marketers for a multitude of profit-based reasons and the results are pretty staggering. Childhood obesity is a now an epidemic. Parents are losing the—newly created—battle of what their kids should eat. Due to exposure of branded food products (even being sold and marketed in their schools) children are requesting certain food products and feeling educated in what they should eat.

In my opinion: children should eat food. Your food. Kids menus should not exist unless they are simply smaller portions of adult meals. Children should not eat only mac-and-cheese as a dinner. If they want some mac-and-cheese, it should be a small side dish served with their vegetables and protein. Children will learn to eat “adult food” if you actually feed it to them.

Should laws that restrict marketing to children be created? Should the focus be more on educating adults and families about what healthy eating really means? Should anything be done at all or is obesity (and other chronic diseases related to diet) a personal problem?

Seeing as how in the U.S. we have rising costs of health care that are affecting everyone’s wallet, I would argue that even if you fall on the side of “obesity is a personal responsibility,” society is still paying the price. 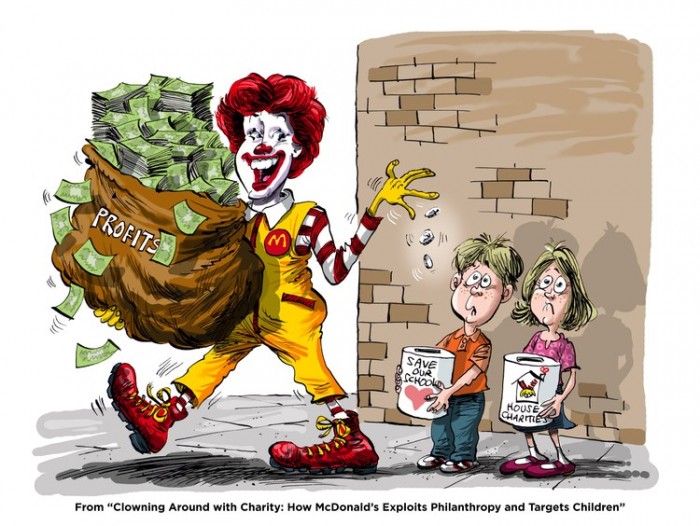 Government involvement in the food system has a lot of avenues.

There are government subsidies, conservation and insurance support programs that directly pay commodity crop producers to the tune of $20 billion—with a b—a year (in the 2008 Farm Bill) for general food consumption recommendations such as the current MyPlate format (an update of the Food Pyramid that first debuted in 1992 and was very oddly redrawn in 2005), and laws that can either benefit or hurt particular food industry profits (with well-paid industry lobbyists always attempting to influence all of the above) just to name a few.

There are even laws that are meant to improve public health by outright banning certain things.

While preventing companies from putting rat poison in foods meant for consumption is legitimate, there is a difference between keeping people from unknowingly harming themselves and allowing people to make educated poor choices.

Personally, I think New York Mayor Bloomberg made a mockery of himself by trying to ban large soda. Making large-sized sodas illegal was dumb, but the need to educate people about the dangers of consuming that much soda is very necessary.

Two things are true about food assistance in the U.S.:

1. Despite the abundance of food in America, hunger is an issue. Due to inconsistent access to food in this country, 15% of Americans are food insecure. Approximately 47 million people are eligible for some amount of food assistance today.

2. SNAP costs a lot of money. About $75 billion—again, with a B—in 2012. The latest Farm Bill (which covers S.N.A.P.) just passed with rather deep cuts to the SNAP budget.

My personal belief is that a country as wealthy as the U.S. should not have starving citizens, especially hungry children. Twenty-two percent of American children live in homes below the poverty line. Hunger is a contributing factor to poor school performance and behavior problems. At the same time, do we need to develop a better way of dealing with food security in this country? You bet. 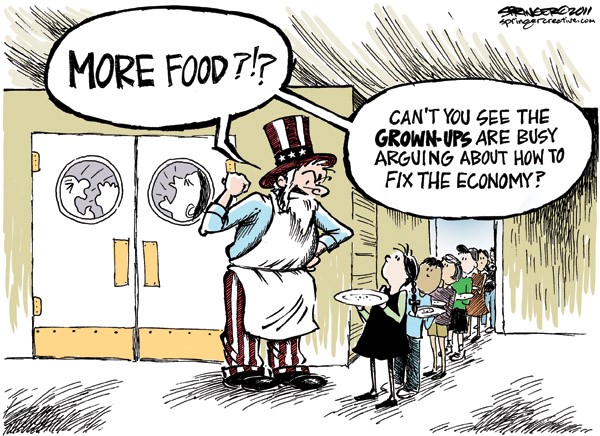 What the heck is in our food?!

These days that is a legitimate question because there are a lot of new things happening. GMOs, which stands for Genetically Modified Organisms (or the term that I prefer: Transgenic), have become common place in our food system without any long term testing. And they aren’t being labeled.

There’s also a lot of hormones, pesticides, herbicides and other additives being pumped, sprayed and mixed into our food. Despite industry money funding research that (surprise!) says their company’s products are safe, more and more independent research points to connections between these chemicals and cancer, endocrine disruption and even obesity. 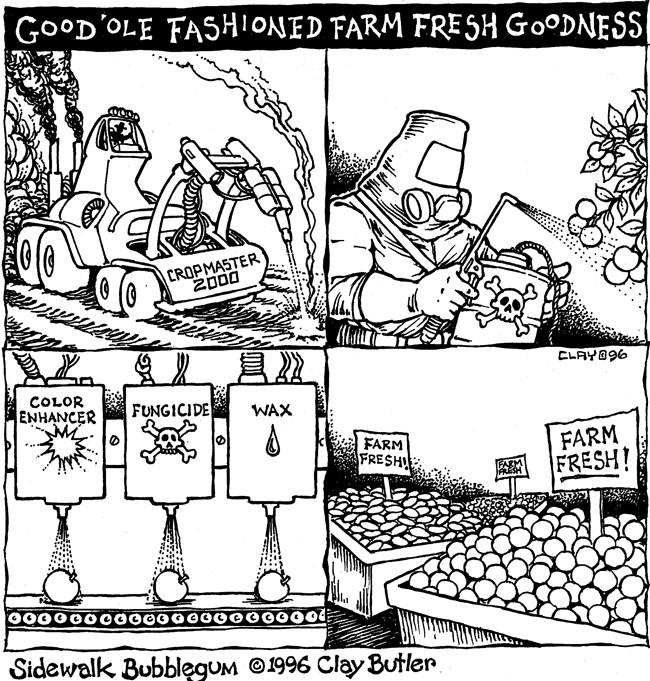 I could keep this post going with many different topics because political cartoonists have a done a wonderful job tackling a lot of food and health topics by making their point visual, easy to understand and thus, powerful. 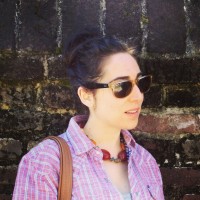