A Monk’s Guide to Overcoming Obstacles in Meditation. I was at the very top of the world.

Or so it seemed, anyway.

Leh, Ladakh, India is at an altitude of 3524 metres (11,562 ft). At this dizzying height, we found a narrow, winding staircase and hiked up hundreds of steps to get to a pristine, white temple.

The air was wispy-thin, and we felt like we were flying. As we roamed around, we found ourselves in a cozy little room filled with Buddhist relics, and photos of a Japanese monk with various notables, including His Holiness the Dalai Lama.

Minutes later, a head poked into the room. It was the Japanese monk himself—we had no idea he was around, or who he was, for that matter.

I discovered later that he jaunts around the world quite a bit, so that it was something of a serendipitous occasion that we met him at all.

He was very friendly and chatty. We sat down on the deep red carpeted floor and spoke about our long travels. He told us about his efforts to build the ethereal white temple we were now sitting in.

Then he asked if we had any questions.

Yup. As if I could tame my mind long enough not to have questions.

“I’ve been meditating for a little while now, but I have so much trouble concentrating,” I said. “Can you give me any advice on how to quiet my mind?”

He looked at me like he could see right through me.

“It’s very easy to concentrate on things like reading and driving, isn’t it?” he said. “But that when it comes time to meditate, it’s difficult.”

“Behaviour, generation, situation,” he said. These are the three things that affect one’s ability to meditate, and depending on each person at a given time, there might be a better method to meditate.

I found these words very interesting if a bit confusing, but I was so caught up in his magnetic presence that I didn’t think, in that moment, to ask him to elaborate. I did write down these three things shortly after we left him to have a cup of tea in a nearby shop.

In the Buddhist tradition, there are five main obstacles or hindrances to meditation:

The first is sensory desire or greed. Regarding and seeking for happiness and comforts through the five senses can impede one’s growth on the spiritual path.

The second is ill-will or aversion, which amounts to any kind of negative thought, or any feelings of hostility or resentment, anger or hatred.

The third is sloth or lethargy. It’s when you have a heavy or dull feeling in the body and/or mind, gross feelings of inertia that can lead, for example, to that feeling you just want to have a quick nap during meditation.

The fourth is restlessness, agitation or worry. In many ways the opposite of the above, it’s that feeling of anxiety that has thoughts scrambling all over the place, and you are unable to calm a frenzied mind.

The fifth is doubt. We often find ourselves not trusting the process itself, or being able to claim strength of mind when it comes to the practice. The tendency to rationalize our decisions not to practice often come from doubt.

These five hindrances definitely relate to what the monk was telling us, but I also had the feeling he was speaking directly to us—to our backgrounds, our journey to date and specifically, our expectations for making great progress where finding peace is concerned.

Behavior as a hindrance can refer to a way of being in the world that is imbued with expectations, of desire to achieve (enlightenment, for example) and also of being selfish in our motivations. Why do we want to meditate? For our own personal growth? To serve and benefit others?

Are we generally respectful to people through our daily actions, and are we filled with gratitude for what we have?

Generation is trickier. My interpretation of this, based on my own meditation experiences, is that we generate a lot of icky stuff (of our own doing) on our road to contentment. As we sit and try not to react to unpleasant sensations in the body and mind, we are effectively detoxifying.

Generation can be thought of as the “stuff” we create by virtue of being gloriously fallible humans, that needs to be shed. It’s like sweating in fever, so that the poisons can be ejected and the body can heal. If we continue to react and resist them as they try to make their way out of us, we entrench new poisoned seeds in us (reinforce our bad habits), and this will result in much more unpleasantness down the road.

By situation, I believe he meant that we can let our life circumstances come between us and a meditative path. It’s a lot easier to try still the mind during a 10 day silent meditation retreat where there are monks and great teachers to guide you, and serene nature all around than in your house filled with toys, gadgets, decadent food and so many other distractions.

“Meditation can’t be done for selfish reasons,” the monk continued, “or concentration will be impossible. One must do karma yoga, work to help others, and the meditation stops being about the self, and meditation becomes possible.”

“Knowledge and wisdom are like oil and water,” he adds. “They don’t mix. The way I practice Buddhism doesn’t focus on knowledge or the gathering of information, but on clearing the mind of knowledge so that there can be space for wisdom.”

“Do karma yoga. Serve others. The meditation will come.” 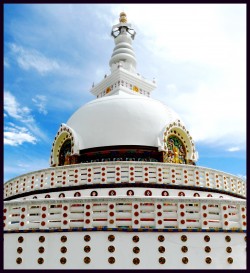