Ever notice the chatter inside your head?

If you’re like most people there’s a dialog rattling away between your ears from the time you wake in the morning till you drift to La La Land at night. Chances are, though, you’re not even aware of it.

Sure, we all hear ourselves thinking and can agree it’s a bit of a racket upstairs when we’re mulling and churning out ideas, but there’s a difference between consciousness and awareness, and most people are conscious of the prattle while not actually being aware of it.

What’s the difference, you ask? The difference is significant and potentially life-changing.

All beings who are conscious have a mind, can think, and have a mental sense of themselves and their surroundings. They can cognitively reflect upon themselves and have a sense of being an individual. But awareness is clearer and more discerning than this.

When we’re deciding whether we want a Caesar salad or a tuna sandwich for supper, the concepts of each are being scuttled inside a nebulous referred to as our mind. But the thing— the space—between those concepts, the something that considers and weighs them against one another, is awareness.

Awareness exists within consciousness, but most often goes unnoticed because our natural tendency is to identify with the concepts in our minds rather than view them from the pristine space of clarity.

This is significant because most people have become so accustomed to their inner-dialog they don’t question the veracity of what they think. Imagine walking through a shopping mall and seeing an adult wearing bright red tennis shoes with blinking lights in their neon yellow soles. Perhaps you think to yourself, those shoes are ridiculous. Well, you’re not correct in such an assertion. It’s true you believe the tennis shoes appear ridiculous, but just because that’s your opinion doesn’t mean they actually are ridiculous.

The fact is, they’re a pair of shoes. Nothing more, nothing less. Any personal opinion you attach to your perception of them is a value judgment—a subjective assessment—which is not an objective observation. We’re all entitled to our opinions, but we tend to accept the spiel spinning in our heads as an accurate commentary on reality. This is natural, but it can also be detrimental.

Consider how often our internal commentaries include judgments about ourselves. When sauntering barefoot through the living room and you stub your pinky toe on the same coffee table you’ve stubbed it on countless times before, is your normal reaction to acknowledge you’re an imperfect human being just like all other human beings, or do you deride yourself? Do you call yourself an idiot or tell yourself you’re stupid because you can’t walk across the same floor without stubbing your same toe on the same coffee table into which you’ve spiked it innumerable times before?

Sadly, letting oneself off the hook for being human isn’t a lot of people’s default response. The especially dangerous thing about making denigrating remarks about ourselves is, just like when we judge somebody’s bright red blinking sneakers as being ridiculous, we believe our assertions. It’s going on in our head, so it must be the truth, right?

Fortunately, it’s not the truth. Unfortunately, however, it can definitely shape our reality.

As Buddha pointed out over 2,500 years ago, we become what we think.

Our thoughts are that powerful. If self-denigrating remarks are regularly buzzing within your cranium, you’re eventually going to believe them, and the more often you say negative things about yourself in your inner-dialog, the more distorted your perception of yourself will be, hence the more it will negatively shape whom you become. Just in case you don’t yet know it, let me share something with you now: You deserve so much better than harming yourself with your very own thoughts.

Here are some suggestions for becoming more aware of your mental chit chat and flipping the script so it will benefit you rather than harm you:

1) Meditate—It’s recommended that we meditate for 20 minutes, twice a day, preferably once in the morning and once in the evening. However, in today’s busy world that can seem like too much to carve out of an already overloaded day. If so, try five minutes.

Committing to that sliver of time daily will bring you into presence more so than normal, enabling you to gain a clearer perspective of the stream of nouns and verbs careening in your head. If you’ve never meditated and are unfamiliar with it, type Shamatha meditation technique or zazen meditation technique into your favorite search engine and choose from the many how-to articles that will appear.

2) Journal—Grab a tablet and a ballpoint pen or boot your computer up for anywhere from two to three minute sessions of jotting down incidents when, throughout the day, you spoke negatively of yourself. You’ll be surprised how much this one simple practice will help you to quit abusing yourself verbally.

Journaling everyday is best, but doing so at least several times a week will suffice and still be of great help. Make it a habit to re-read your entries every Sunday. You’ll recognize patterns you didn’t see before and you’ll become more aware of when you’re lashing out at yourself, thus better equipping you to pause before unleashing self-directed barbs.

3) Affirmations—Write down five to seven separate sentences, each a positively worded statement about yourself or how you will use your mind to benefit you rather than harm you. Make sure they’re short enough to memorize. Read them aloud, with conviction and emotion, first thing in the morning, then preferably again at least once later in the day or at night.

Repetitively reading or reciting them instills what you are saying into your subconscious, creating a new reality for you. An example of an affirmation for flipping your self-talk script is, “I am a human being, flawed and imperfect, just like everybody else, and I accept myself 100% as such.” Another example is, “I love and accept myself unconditionally, and what I say to myself about myself will flow from a space of genuine compassion and understanding.”

4) Challenge—When you notice you’re saying something derogatory about yourself, pause, take a deep breath, then let it out slowly. In that open mental space you just created, challenge whatever negative thing you said. If you called yourself a name, ask yourself how your best friend would feel if you called them the same thing. Let’s say you called yourself a loser. Think of what the reaction would be if you called the person you care about the most a loser. Would you want to make them feel that way? Probably not. So why would you say the exact same thing to yourself?

5) Pray—Whether you are a member of an organized religion or not, whether you define a spiritual experience as swimming alone in an early morning stream or being pierced to your marrow by birdsong while poised atop a zafu, praying connects you to an ineffable power greater than yourself.

Pray when you first wake in the morning, and pray when you turn back the covers on your bed at night. Ask for help in being more compassionate toward yourself. Ask to be more aware of the nature of your self-directed speech. Ask to be guided into speaking more healthfully and beneficently toward yourself. Just keep praying, then watch things change for the better.

We get so used to our conditioned way of thinking that we seldom call it into question. We express countless opinions all day long about everything from the turmoil in the Middle East to whether the sound of rain is soothing or annoying. We merge seamlessly with our stream of thought and forget our thoughts are merely concepts, not reality.

Our inner critic devalues us, but we get accustomed to hearing it so we start believing it. When we believe it, we live by it. Our subjective truths shape whom we become and the directions our lives take. Flip the script on your negative inner-dialog and talk to yourself the way you would your best friend—encouragingly, understandingly, and compassionately. Let your thoughts be seeds of peace, empowerment, and joy. You deserve it. 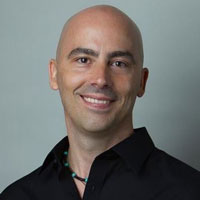