I arrived in Michigan on the run.

Presumably that’s what people are doing—foreigners like me—when they venture into the ‘Mid West’. I barely knew where that was and cared even less. I could have been marooned in space for none of it mattered. What difference did it make if I was here or there?

Somewhere other than watching her move out of our home or listening to the noiseless scream from us both, blind with heartache and deaf to the bells of alarm.

Truth was, I’d been on the run for years, across continents and over oceans, searching, I thought, for a rock under which my heart could finally be buried, where the thick damp moss would spread and solidify, hermetically sealing sorrow into the earth.

No time for burial rituals. No need for such trivial formalities.

Her letter found me hiding from myself in New York.

On a crumpled sheet of lined note paper, she scribbled out three short paragraphs—it’s first unforgettable blow was, “It is clear to me that I am done.”

Our story, our promise, reduced to this.

Gone was her impressive penmanship. Gone her thoughtful and precise attention to detail.

As yesterday’s news, the repressed experience, I became the dust of our ruin.

Gunned down by our demise, there I lay, eyes wide, blinking in the sunlight, speechless in the early stages of trauma. Warmed by the blood seeping from the wound of her, I was unable to indicate where it hurt. If I was alive, I wasn’t sure.

For her my heart had filled and with each rhythmic compression, I came to believe in our collective power, in the kindness of ongoing discovery, in a place where everyone grew at their own steady pace. The aortic chambers squeezed and released methodically to the beat of her own.

Is it the way we’re built?

Do we all start off on a biochemical level footing?

How is it then that mine choked?

When pushed too far the system inevitably breaks, triggering near fatal disturbances on a molecular scale.

Repelled by a life without her, I resisted the acceptance my fate and lingered in the ashes; in the reigning grey of each ordinary day, raking through the rubble salvaging the pieces no one wants. Missing her was a ceaseless yearning. Reeling beside the frozen Michigander lake, I gracelessly abandoned myself, leaving in command an unequally yoked spiritual desperation and my mind’s rampant distemper.

The mirror’s reflection continued to be my self-perpetuating fear—a powerfully destructive force in our lives. Huge vacuums of time swallowed up trying to unearth and expose the final moments of tenderness. I rolled out our story like a sail bearing the ensign of my vapid offering and forced upon us an austerity that simply had nothing to do with her.

Manifesting the fall, we realized the fate of the proverbial Humpty Dumpty. The shattering of my childish illusions was only a matter of time. In their midst I milled about waiting—robotic, misshapen and suspicious.

Wreathed in thorns of grief, my journey spread out dauntingly before me. In the stillness of my unraveling, I devoted myself to a rigid practice of daily surrender and nightly renewal. Isolated and profoundly alone, I counted the minutes to get through the days, the days to shield me into the months and, as I was to later know, the years apart from her.

But it wasn’t time I needed, it was progress. Essential time of growing up and growing through the years to find peace in the story of us and ultimately, reconnecting to the joy in the gifts she brought.

Repeatedly, I accused her of destroying me when, in fact, the very opposite is true.

She tore down the trading post of emotional penury where my devalued currency was no longer accepted.

Nor was she ever the thief I charged her to be.

When she sailed off with my heart it was because I had thrust it into her hands the moment she breathed an unforeseen promise into my petrified lungs. The magnetism of her lips scorched my own as her hands mapped the landscape of my soul, introducing me to uncharted and undiscovered waters.

The heart’s natural repair unifies itself into the organic strength of the thick muscular tissue. Full cardiac function returns, pooling and pulsating a steady beat, blood that flows in a more sanguine way.

Courage and humility mutually ignited having stripped myself back to the barest bones to let my heart’s voice speak softly with nourishment and abundance. No distractions, no vices.

For her I will let love and its absence collide.

Steady and strong, moving through each transition mindfully aware of my intention to be guided by an unsinkable intuition. In the rebuilding I was wholly unaware that it was less about salvation and much more about forgiveness. Finding freedom beyond the lines of my shadow self where my love of her is not accompanied by the malignancy of shame.

No longer do I bend under the weight of us. Today, I do not check myself for abnormal heart rhythms or shortness of breath when she periodically reappears. Nor do I succumb to the petulant compulsion to tear away at my memories as though in some way nullifying the past will brighten the future.

The protective rattle of her ring on my pinky serves to mark the substantial capacity of my devotion to the woman I am today. A woman who knows herself. A woman who trusts herself to act with grace and awareness. No more the lonely wolf, baying with longing, feverishly pacing the shore’s edge.

Esther was midnight’s darkness and the dawn’s welcoming half-light all at once, guiding me up through the years of silence and the layers of loss.

It is a true saying indeed, ‘to err human, forgive divine.’ 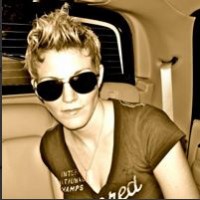