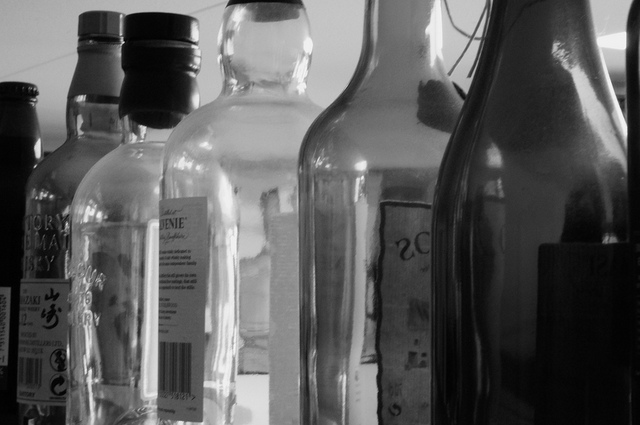 The tiny three-week-old baby lying beside me. Breathe…wait a second. (This isn’t going to work.)

Why did I deny my own experience for so long thinking that being a mother was holding me back from being a Dharma practitioner?

As a mother and a Dharma student—my experience of the last six years has been one of slowly being polished in the rock tumbler of motherhood. Many people reside in their own rock tumblers: the old age rock tumbler or the teenager rock tumbler.

The metaphor suits both a practitioner’s mind and a mother’s mind. So why not combine them? Slowly being polished with cyclical movements or sometimes-jerky ones. I used to not ask these kinds of questions but today I do.

Rewind five years from the point of my first baby.

When I first quit drinking alcohol at 22 I knew I had a problem. I couldn’t stop drinking, driving, and drugging. It was almost compulsive, the need to get in my car and feel the weight of the pedal under my foot while high. Was it the need for control? Was it the craving for a feeling of freedom from a troubled mind? I was acting out of unconscious anguish of past trauma unnamed. It takes so little to affect us in powerful ways.

I was acting under forces unknown at that time: destructive forces. I was playing with mother universe, taunting her. There was a dark cloud that resided in my stomach at all times.

I tried numerous times to stop drinking on my own. Then a trip to Mexico would happen; up for two days and nights. A casual night out and one glass of wine turned into ten, a one-night stand and a trip to Denver. It was becoming clear that I could not have just one drink.

Another night—another sunrise and I realized I needed to go to Alcoholics Anonymous. I got sober the next day. I had a few slips, but I made it. The first year was the hardest. That also happened to be the year I discovered meditation.

The beauty of living in a place like Boulder is that my neighbor noticed me. I don’t mean in that way.

He had a boyfriend. He had watched over the last two years and noticed something was different about me. No more late nights and drunken hellos. He noticed my new melancholy eyes. He noticed I was alone often.

Unfortunately, I had not yet embraced the fellowship that AA offers. I was still scared to even say hello to someone sober let alone reach out and try to make friends with new people. He asked me if I wanted to learn how to meditate.

I was naturally drawn to the cushion though I wouldn’t have said that then. I could do this. I could sit here. It gave me something to connect to. The directions were so simple. Downward gaze, crossed legs, in and out breath.
For the next year I clung to this simple practice like a lifeline. My friends gone. My alcohol gone. My life was over, as I knew it. Breathe in. Breathe out.

This meditation practice saved my life.

I went to meetings. I meditated. I sat in my room alone weeping-or you would find me sitting by a tree along South Boulder creek weeping- releasing all of the pain I had stuffed with my drinking for so long. I went to more meetings and I meditated some more. A year of my life was given over to these simple steps. I was a woman transformed.
I traveled, I moved to Denver, I met my husband, I had a baby, and I started a career.

Back to where we started. I was 27 and attempting to do a two-week solitary retreat with my three-week old infant when I hit a wall. The wall was motherhood.

I was stuck at that wall for five years. I reside within the rock tumbler of motherhood, waiting, being polished. I don’t have time to sit and breathe out and in anymore. Someone needs me. My sitting meditation practice that saved my life was gone, as I knew it. Motherhood has transformed me once again. So much guilt for me at losing this simple practice that meant so much for so long.

In the last two years the wall has started crumbling… there was another gift yet to be discovered. It just did not come in the package I was expecting. I learned about the Lojong teachings and realized I could embrace my practice through my experience with others. I thought for so long that my busy life and caring for my children was a hindrance to my practice of sitting meditation because there was no time and no energy left for it.

The Lojong teachings opened up the world of experience as a teacher.

Lojong teachings offer a view and a way to work with the mind to transform our habitual focus on the self into care for others. Now, I practice loving kindness whenever I remember to. Including for myself for never being the perfect Dharma student. The wall I thought was so high and so hard—transformed into my teacher.

I still fall apart, regularly, but I always come back to the moment. And the others around me, they remind me every moment and in every day to trust my experience and embrace my life one breath at a time.

“You are the closest I have ever come to magic.” ~ Suzanne Finnamore