Today, yoga classes are available on a drop in, as-needed basis, but traditionally, yoga was prescribed by the family Vedic guru (teacher) whose job was to teach the children the ways of a Vedic lifestyle.

This of course included the practices of yoga, breathing and meditation, but also had much to do with Vedic psychology and even offered lessons on how to succeed in business, marriage and life.

Interestingly, the yoga postures were prescribed individually rather than in the style of a group yoga class.

Each posture was like a meditation in and of itself and was held for a minimum of two minutes, and some were held for much longer.

These long holds administer benefits that go deeper than delivering a good stretch.

I am not at all opposed to group yoga classes—in fact, I think they are extremely beneficial.

I do, however, think we can gain valuable insight into how we practice yoga from these traditional long-hold teachings.

Join me in this article as I dive in to the logic and magic behind the tradition of long-hold hatha yoga.

Why Such Long Holds?

Kundalini Vidya is the study of yoga from the perspective of guiding the flow of kundalini energy through subtle energy channels—or nadis—from the base of the spine to the sahasrara or bindu point on the top of the head.

This is the current of energy that is believed to be tied to spiritual awakening and is the ultimate destination for the kundalini energy.

Yoga postures direct this journey up the spine, but without ample time in each posture combined with breathing and meditation, this journey, as we will see, will be challenged.

Removing Density from the Body 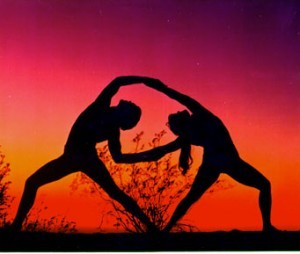 As a result of stress, poor diet, lack of movement, aging and emotions, the body can become very dense.

When the body becomes dense, it becomes very stiff and rigid. The body’s life force or prana, which moves through every cell of the body, cannot do so fluidly in the presence of a dense physical body.

One of the purposes of yoga asana (poses) is to help break up the density of the physical body, thus allowing the prana to flow more freely.

For this to happen, the posture needs to be held for an extended period of time. This is the reason for longer holds on the gross physical level of the body.

Long holds allow the muscles to begin to relax. If you hold a posture for just 15-30 seconds, the tendons—the attachments where the muscles connect to the bone—tighten in resistance to the stretch. If the posture is held for 2 minutes or more, the belly of the muscle where all the blood —and with it the potential elasticity —are found will begin to release and lengthen.

Lengthening the belly of the muscle is like putting elastic links in a chain—the result is more permanent elasticity and flexibility.

With greater muscle flexibility and elasticity, the prana can begin to move and help break up the subtle mental, emotional and energetic blocks in the body. Once the prana begins to move, it activates a subtle energy carrier system called the nadi system.

In this way, restorative yoga, yin yoga, and other forms of hatha yoga that seem simple or slow, are not at all “beginner’s yoga.” They offer very powerful returns, because woven in with the simplicity is something incredibly profound.

There are 72,000 nadis, or subtle energy channels in the body, according to Ayurveda and Yogic philosophy.

Interestingly, these subtle channels do not exist in the body when there is no prana moving into them.

Once the prana moves through the density of the physical body, certain nadis will come alive and appear or be activated. This process is analogous to the formation of a lightning bolt.

The nadi channel is the pathway that the lightning takes.

The prana is the energy of the lightning.

Until there is lightning or pranic energy to light up the channel, no bolt or pathway for the energy can be detected. So, if the density of the body is not broken down with the long holds in yoga, the prana will not be able to penetrate the body’s density and certain nadis will remain inactivated.

No lightning, no lightning bolt. No moving prana, no nadi.

Once the nadis are activated by the surge of prana from a long hold yoga pose, the nadis begin to concentrate in the energy centers of the body, called chakras.

This stimulates the chakras to start to move or spin and thus paves the way for heightened mental awareness and spiritual progress.

Out of the 72,000 nadis (subtle channels) of the body, only six of them carry the Kundalini Shakti (spiritual energy) from the base of the spine into the spiritual brain centers, the Sahasrara or 1000 petaled lotus which marks the harbor for spiritual awakening. Between the ages of 16 and 18, the Kundalini or spiritual energy begins to awaken in the base of the spine and starts its journey to the brain centers.

Depending on the state of balance or imbalance of the individual during those formative years, the spiritual energy will choose one of SIX nadi channels. Certain nadis like Brahma and Chitrini Nadis are direct pathways and take the spiritual energy to the highest brain centers.

Shushumna Nadi—which may be the most common—moves through and purifies each of the chakras on its way to carrying Kundalini energy to the higher brain centers.

The last two, Vajra Nadi (the sex channel – discussed here) and Saraswati Nadi are incomplete and culminate in only the lower brain centers, not fulfilling the journey and potentially trapping us in a cycle of circulating spiritual energy that is never complete and thus never quite fulfilling.

In the case of the Vajra Nadi, we may feel that we need to continually stimulate this nadi through sexual activity, momentarily reaching the state of fulfillment but never reaching the level at which this becomes a lasting experience.

The Bearing of the Nadi Chosen

When the spiritual energy enters the chosen nadi or pathway, the individual takes on certain mental, emotional and physical traits that are unique to that nadi.

In a strong sense, the nadi that is carrying your spiritual energy molds much of your personality and emotions.

Vajra and Sarawati Nadis are easy to enter and Shushumna, Brahma and Chitrini Nadis are more difficult in that order.

The more difficult it is to enter a certain nadi, the greater the experience. So the healthier you are mentally, physically and emotionally, during childhood, the better chance you have at entering a nadi that will deliver a fulfilling spiritual life.

I wrote my book, Perfect Health for Kids with the intention to help bring children into balance so the kundalini energy would choose a more fulfilling nadi pathway and thus deliver a more fruitful and spiritually rewarding life.

Through the practices of slow yoga, breathing, meditation and a balanced lifestyle, according to Ayurveda, it is possible to bring the kundalini back to the base of the spine as an adult and reroute the energy into a more fulfilling nadi.

Holding the yoga postures for an extended period of time is required redirect the kundalini into a more direct and fulfilling nadi. Slow yoga gives the prana enough time to break up blocks in the physiology and begin to move. Once the prana begins to move during slow long hold yoga it can activate the nadi system and bring awareness, purification and spiritual progress.

Breathing or pranayama exercises are then employed to enhance the movement of the prana and further activate the nadi system.

Meditation, which is the final step in the process stills the mind, heightens awareness and creates a silent platform for the subtle spiritual energy to begin its journey from the base of the spine to the top of the head.

When the postures are held briefly, or the breathing and meditation components are lacking in this process, the full potential of these practices is left unrealized.

That is not to say there are no benefits to a practice without long holds—there certainly are. My goal here it to shed light on the benefits of slow, long-hold yoga, breathing and meditation as parts of your practice, not to take away from the benefits of group yoga or some of the faster, more fluid forms.

Note: The benefits of breathing and meditation will be covered in great detail in my upcoming meditation course, the Transformational Awareness Technique. Get a taste in my free Meditation training video series, coming out in July. Register here.