5 Gifts from Growing Up Buddhist in Canada’s Bible Belt. 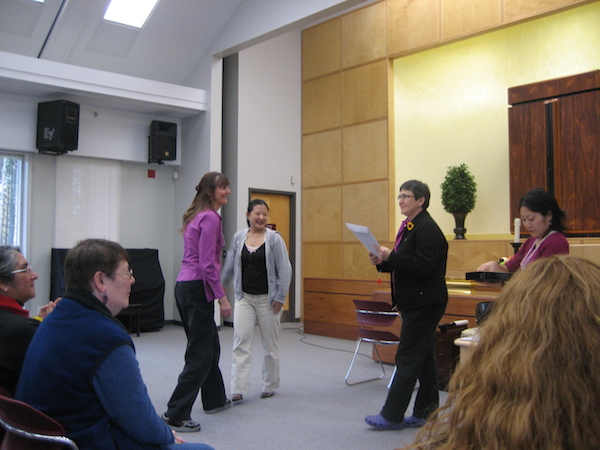 “Unless we view things with our hearts, we can see nothing. But if we look at the world with a love of life, it will reveal its beauty to us.”

In Nichren Buddhism, that’s what it’s called when children are born into a family where the mother practices.

It’s what my brothers and I are.

Believing in the value of established and traditional practices in politics and society, relating to or supporting political conservatism. (From Merriam Webster.)

That’s what Alberta is. The province where I grew up.

Enter an underlying sense of alienation.

Picture this. I’m a young child. Somehow the topic of religions comes up in a conversation with a friend. What does it mean to be Buddhist? I can’t answer this question. All I know is that my mother chants sometimes an hour at a time each morning and evening. I know that people come to the house for meetings who speak in a way that’s hard for me to understand and who bring candy-type treats fresh from Japan.

“Well,” asks my friend, “Do you believe in God? ‘Cause then you’re a Christian.”

Is it really that easy? What is God? We don’t use that word at home. I offer a tentative, “yes” and continue my wondering. Does that make me a Christian? What else am I supposed to call this budding conviction that there is a power inherent in the very make-up of the universe?

I tuck away these thoughts where they roll around inside of me like the waves of the ocean I haven’t yet seen.

Fast forward to Junior High—that’s middle school for those who are looking at me quizzically—it’s December, and we’ve been covering a unit on Japan. “They don’t have Christmas in Japan,” my teacher says, “because most people practice Buddhism and you won’t find a Buddhist that celebrates Christmas.”

I’m a shy and unconfident pre-pubescent girl. I don’t say anything. I think silently about my ornament-dotted tree at home. The one that makes me feel so peaceful when its lights are on at night and I can smell the pine in the air. I think of how we celebrate in that give-the-family-what-meager-gifts-my-parents-could-afford and eat-meals-with-grandparents sort of way.

The class moves to the library later and I sneak away from my group project to find the teacher. “You know how, uh, you said Buddhists don’t, um, acknowledge Christmas?” I turn the end of my phrases upward the way 11-year-olds with confidence issues will do. “Well, we celebrate Christmas? And my mom, um, practices Buddhism?”

I don’t remember my response to his declaration, or if I had one. I’m sure I simply slunk away. Does a person have to wear an orange robe to be a Buddhist around here? I let it go, free to nestle into the memories pre-teens carry around with them.

Further forward still to High School. I’m about one twentysixthousandth more sure of myself. Enough that I speak up in class sometimes; I express who I am a bit. Enough that I garner the nickname “hippy commie.”

In the hallway one day a well-meaning teacher stops me. “I’ve noticed some of your classmates sometimes call you a nickname…are you okay with that?”

“Well—it’s true! Except for the free love and drugs and all that”—I clarify the “hippy” part a bit for accuracy and hey, I’m all for communal ownership.

My classmates had me accurately pegged. The teacher walked off, slightly baffled. The most vivid thought I had in that moment was how he was a Mormon, how he fit into that part of the world in ways I never did.

There was one other family practicing this sect of Buddhism in the area. Yet, other than our mothers, somehow we never managed to connect. Every so often a student, usually from Japan, would study at the University in the small city near my hometown.

Growing up Buddhist in conservative, small town Alberta put me in a unique situation.

It offered me many gifts.

I was held between opposing worlds. The young friend who wanted me to believe in God was searching for some sort of common ground. She pulled me one way and I didn’t know where to go. At home I would chant with my mother. Would I become a Buddhist? What does that mean?

1. I was given the gift of questioning.

I couldn’t take beliefs for face value. With the incongruence between my home life and the world around me, I was forced to investigate what religion really meant to me. I developed a searching heart.

2. I was given the gift of acceptance.

3. I was given exposure to other cultures.

It was difficult to experience cultural difference in my hometown—not counting whether someone’s grandparents spoke high or low German. My family would often travel to the large, urban centre a couple of hours away. There, Buddhism meetings would always include a “culture show.” When I wasn’t playing in the library with the other kids while our parent’s chanted gongyo, I’d be taking in the cultural offerings put on by people of various ages and ethnicities. I experienced the richness of cultural diversity.

4. I was given the gift of concentration.

Admittedly, my childhood included hours of staring with rapt attention at a video game screen, but it also included concentration on something more productive. Having the opportunity to chant to the Gohonzon, an inscription of the Mystic Law, gave me practice in stilling my mind and focusing on bringing forward my highest self.

5. I was given the gift of freedom.

Now, I’m not a member of Buddhism, but when juxtaposed with the socio-political climate I grew up in, my unconventional upbringing gave me a foundation to launch from. I was able to use the gifts I’d been given to find the path that is appropriate for me, for which I am very grateful.

The heart of the Lotus Sutra is the revelation that one may attain supreme enlightenment in one’s present form without altering one’s status as an ordinary person. This means that without casting aside one’s karmic impediments one can still attain the Buddha way.