How to Find Your Soul Mate by Walking Away. ~ Kate Mansfield Finding love, real love, the kind of love that lasts, has been a really long and painful journey for me.

I spent years repeating a deadly cycle of chasing unavailable men and running from the ones who were really into me. I went through boyfriends like party outfits.

Family and friends said nothing but I could see the silent eye-rolling and the thinning smiles as I introduced yet another potential into the fold and they knew as well as I did that it would never last.I couldn’t understand what was wrong with me, why couldn’t I make a relationship work? What was it about me that was so defective? I blamed myself and become more and more desperate.

Years of therapy and 12-Step recovery helped, I built a life that I wanted to live and tried to make peace with being single. But I still dated frogs and ran from all the Princes. I was terrified of commitment and more so of true intimacy.

Until I met Aaron.

He crept up on me slowly, I didn’t fancy him at first but we became friends. We were both divorced single parents and found solace in each other. I thought this was the ready-made family I had craved for years. Sick of being excluded as the sexy, single mum and threat to the happy, coupled parents at my son’s school…this was the perfect scenario.

And then one day we had a spectacular moment in his kitchen. After a bottle of red wine and leaning over a leather bound antique book that he’d been working on restoring, he kissed me…and the whole world melted. This was it.

I thought I had finally found true love. That is, until we came up for air and he said the fatal words:

I think you’re great but I don’t want a serious relationship.

I was devastated. I couldn’t believe what I was hearing, my heart turned to lead.

But then something really surprising happened. I pulled away from his kiss, and although I felt an unbearable pain inside me, the work I’d been doing on myself had slowly and very powerfully changed me without my even realizing.

I looked him straight in the face and I said, “Oh, that’s a shame because I do. I really want a relationship.”

I walked out, and went home. I sent him an email the next morning describing the kind of love and intimacy and closeness that I wanted—not from him, but just in general terms of a relationship. I was not willing to settle for anything less.

I sent it and felt utterly terrified for a minute. And then something amazing happened: I sat on my kitchen floor and I felt something that must be as close to a real connection to God as it gets. Not in a religious sense, but I felt a warm, full feeling replacing the hole that had always been inside me, the desperate craving for another person to fill me up just slipped away and I said out loud, “I GIVE UP!”

And this time I really meant it.

I was prepared to trust that it would all work out, that I would meet someone who was capable of loving me and most importantly in the meantime I was willing to love myself and show myself this love in my actions.

I was prepared to face life alone if necessary, and that felt ok. It didn’t fill me with sadness and dread, it felt exciting and hopeful and peaceful, and my soul came to rest inside of my body in a way that it never had before.

A few hours later, in a lift at work I met my soul-mate and future husband.

The love of my life walked in and instantly I knew it was he.

I made sure to keep putting my newfound beliefs into action, and after we spoke briefly he stepped out of the lift and I thought he had gone forever. Again I was at peace with this.

He ran down the stairs and waited outside to make sure I didn’t get away, and after a brief and awkward conversation he didn’t ask me out and so I smiled and walked away.

Thankfully he chased me up the road and asked me out to dinner. Yes. I was finally ready to say ‘yes’ to love. 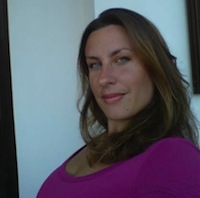