Land of Pure Vision: A Picture Pilgrimage into the Heart of the Himalaya. ~ David Zurick {Video} I wandered in Tibet and the Himalaya for many years not seeing a sacred forest for the trees.

I went there first for adventure and later seeking scientific knowledge. My mental map of the region was filled with its famous landmarks and not the coordinates of a divine landscape. The very notion that human consciousness might become imprinted upon the planet—shaping a terrain-based mandala of spiritual life and worldly progression—was alien to me. As a result I was missing something important about the matters of faith and geography in this highest of Earth’s places.

Whenever I entered a musty old monastery perched high on a cliff, skirted a lake brimming with mantra-chiseled rocks, or ducked beneath a line of prayer flags hanging like monk’s laundry above a mountain trail, I knew I was crossing holy ground, but I thought them to be singular spots—isolated and disconnected from one another and outside my experience. Slowly, their shimmering presence muscled into my consciousness. I wanted to learn more about them.

I am ill-suited, though, for a monastic life and lack patience for esoteric canon, and so I grabbed my camera instead and embarked upon a one-year visual study of the sacred places in Tibet and the Himalayas.

I believed that to see holiness in the world is a point of view.

Some of the places I photographed are sanctified by their physical lineaments: a soaring summit where sky meets land in a kind of axis mundi; the confluence of two or more rivers; a cave; hot springs where fire meets water; or the upwelling source of a lake.

Belief and religious practice transform such natural features into auspicious sites. Others have direct human origins: the birthplace of a saint, a site of miracles. Pilgrims traveling among these spots follow the ritual trajectories of their divine space much as a geographer might delineate the pixelated lines on an electronic map.

Most sacred sites, though, also require some kind of physical demarcation in the landscape to be recognizable: the architecture of a religious building; a wall of scriptural rock tablets stacked along a pathway to a shrine; a chapel set inside a forest grove or a cairn atop a mountain; a carved statue or a painting. These markers populate the mountainous terrain, guiding people through a transcendent terrain, and were open to my line of sight.

I worked with a large-format camera and sometimes felt the urge to toss it from a cliff and rid myself of its weight.

That feeling would arise most commonly during a long uphill climb when I was exhausted, or when I had to tediously load sheets of film into holders while the wind was howling a gale and my fingers were numb from the cold. Mostly, though, I was content to lug the cumbersome equipment into the mountains.

The business of setting up a big camera always forced me to slow down and work carefully, which perfectly matched the purpose of my project.

When finally I centered myself into an image, peering with stillness through the camera lens, I couldn’t imagine a better place to be at the time.

This became my meditation.

It provided me with visual acuity and an opportunity to see the world around me as having a shimmering, spiritual cohesion.

Of all sacred places located in the Himalaya, none are deemed more powerful than Mount Kailash and Lake Manasarovar. Both are located in the western frontier of Tibet, only a few kilometers from one another. In Buddhist practice, as well as the region’s Hindu, Jain, and Shamanic traditions, they are believed to lie at the very center of the world, anchoring Earth and empyrean to a cosmic mandala.

For thousands of years, devout people have journeyed to these remote spots on arduous quests of salvation and spiritual merit.

Circumambulating Mount Kailas in a rigorous pilgrimage might wipe away the sins of a lifetime. Immersion in the frigid waters of Lake Manasarovar could purify a person to the point of salvation. For reasons of politics or bad weather, these two iconic places had eluded me in my decade-long pictorial journey through the sacred geography of Tibet and the Himalaya.

In summer of 2013, though, I finally reached them, made a picture, and wrapped up my project with one last image and ritual walks around the sacred lake and mountain.

David Zurick’s photographs from his Sacred Geography series are published in the book Land of Pure Vision (2014), with a forward by Eric Valli. 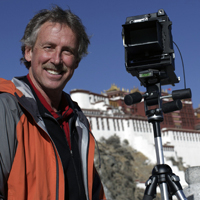