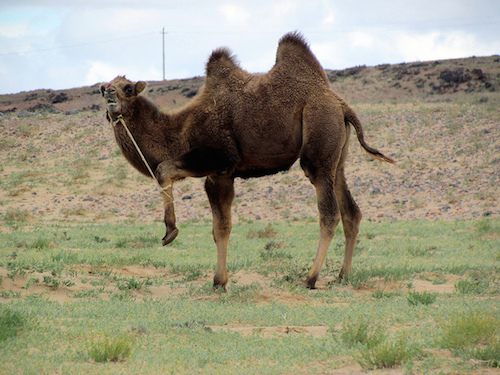 I cross from the West Bank back into Israel today, and the soldier waves me out of the bus with the other Palestinian passengers.

Next to the bus there is this SUV, and there are soldiers surrounding it reaching inside the back, looking confused. There is this horrendous sound of screaming—an almost human moan coming from within.

I worry that they are abusing some sick and elderly woman who has gone mentally deranged, but they are demanding the visa in my passport and it is not there.

They are anxious and I am worried, and all the while there is this bizarre sound.

Then, all of a sudden, there is a hiss and scream, everyone jumps back, and a full grown camel, snarling and gnashing its teeth, is somehow birthed from the back of the SUV.

A bunch of confused 19-year-olds, half smirking, half-scared, fall back from this first taste of battle as the camel shits all over itself and hisses some more, with one leg weirdly lifted in the air by a rope.

I jump into the bus to protect myself and the driver closes the door and starts driving.

But I need to get my passport, so I start yelling for him to stop. Many awkward moments pass, as we all watch this tragicomic scene in dazed confusion, with the driver pressing me in Arabic. The soldier returns, and all is well.

My name is Jewish after all.

The real problem with apartheid may not be the emotional damage but the sheer hassle of it all.

At 6:15pm, I am 45 minutes from Tel-Aviv in the West Bank, but my friend has to drive me to Jerusalem (he cannot drive any further due to his restricted permit), where I catch a bus into the official border of Israel.

This is not the real border anyways. Israel has systematically sought to confuse the international community (and even its own citizens) as to where exactly the real border lies.

So, I have to walk to the bus station on the Jewish side of Jerusalem. But the city of three faiths also has at least three bus stations. I walk to the next, then the next station, where an Orthodox Jew with a half-Brooklyn, half-British accent gives me excellent directions to another final bus station (if Josef Stalin gave such good directions even he might win me over).

At 9:15pm, I arrive in Tel-Aviv. Quite a needless exercise.

Of course, if you are Palestinian it is harder.

This evening’s journey began today from Taybeh Beer, the only micro-brewery in the Middle East. While 97 percent of their ingredients consist of water, their water is turned off by Israeli authorities five days a week. Passing the checkpoints slows distribution as well and makes it difficult to maintain regularity in customer relations.

Because of this, daily business is a constant headache of putting out fires for upper management. Because they have to get their beer checked by dogs each time they pass, on cold days when the dogs stay inside, there is no distribution, while on hot days, the dogs go wild from the smell.

And yet somehow, they persist and are growing.

Palestinians are possessed with amazing patience. Whereas Americans who go to the West Bank tend to come away infuriated, most Palestinians seem to take it in stride.

It all makes me wonder whether the Israeli authorities are actually the Gods they believe themselves to be and they are sending soldiers to the West Bank to give spiritual lessons to the Palestinians.

There is a book in here somewhere, and I would like to call it “Kafka on the West Bank.”