Swallowing the Nile Woke Me Up. ~ Megan Ridge Morris I was drowning to death.

I was so young. I hadn’t reconciled anything.

I didn’t even have a solid belief about what happens after death. My dad was terrified that something terrible would happened to me in Africa…and I was about to prove him right on our only day off.

Let me start from the beginning.

We drove two hours from Uganda’s capital city of Kampala to the remote village of Jinja for white water rafting down the Nile River.

When we boarded the raft, tensions were high. One of the women on the trip, Ann, was very concerned about the raft tipping. Everyone else took on the roles of cheerleader and empathic because we’re a bunch of co-dependent yoga teachers that can’t bear to see someone in turmoil.

Big J, our leader, was a bad ass and put us in our place fast.

“Rafting is no joke. Have any of you done this before?” Nope. Big J took us through the dos and don’ts of rafting. All of this new information worried Ann further, and, I must say, it felt like a lot to remember.

We started down the river and soon approached our first big L five rapid. There are six levels of rapids: one is like the wave pool at Six Flags and six is like what Kevin Bacon was up against in “The River Wild.”

Everyone worked together beautifully, calling out things like, “Paddle harder!” and “Together!” But by the time we reached the other side, I noticed Ann was gone. She was retrieved by a rescue kayaker and brought back to our raft. She was shaking and crying hysterically. I secretly thought she was over-reacting.

As we approached the last rapid (a massive L six), the most dangerous of all the rapids, Big J counseled us on what to do if we capsized. There were four large waves to get through, and if we tipped early, we would need to hold our breath for a long time. We all had to paddle hard to make it through.

Ann was freaked. I was ready. We clapped our paddles together in the air like a rafting A-Team.

I saw the steep, monstrous waterfall approaching fast, and fear mounted inside of me. I kept paddling with all my strength, then, I felt the raft starting to lean to my side. I was suddenly out of control and catapulted off. I thought the boat had flipped, as I was stuck underneath for a few moments.

Wave after wave pummeled me down as water flooded my lungs. For the brief moment that I surfaced, I couldn’t catch my breath, couldn’t inhale. I was panicked.

After what seemed like forever, a kayaker came out of no where. He swiftly pulled me to him and placed me in rescue position—straddling his kayak, belly up. In the midst of coughing and burping up water, I had the briefest thought: this is an incredibly vulnerable position.

Big J gave me a moment to catch my breath before pulling me back into the boat. It wasn’t until that moment that I understood the fear Ann felt. I couldn’t stop for a moment before we started and think to myself, *There’s likely a serious and legitimate reason why Ann has this deep-seeded fear. I should be respectful of that.*

Instead, it took the absolute terror of drowning and swallowing half the Nile for me to wake up.

I learned a lesson in humility that day, which wasn’t too common for me in my invincible adolescence. I learned to be more aware and compassionate of someone else’s journey. Instead of looking at fear as weakness, I started seeing fear as an opportunity for growth and transformation.

We serve ourselves and ultimately the world better by looking at our experiences as lessons and the people that challenge us as teachers. Then nothing that happens can be labeled as good or bad. Every day on life’s path we are presented with the stepping stones necessary to becoming a more realized person.

We pulled the raft up to land and made the long trek, barefoot, back to our bus. The Earth was red and burned my feet. I felt like I was walking over hot coals and took brief breaks on the shaded parts of the path. I paused to consider how many times we learn lessons the hard way because the Universe is out of more favorable options.

Now, when I feel fear, there’s also a little part of me that gets excited too. Because I know that if I cultivate the courage necessary to go toward my fear, I will come through it changed. I will manifest an even better version of me. Everyone has the power to do this. This is magic at it’s core—the ability to shift something at will.

I am thankful to Ann and to the mighty power of the Nile River for waking me up. 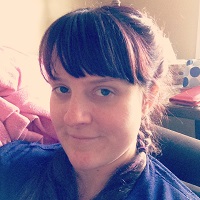