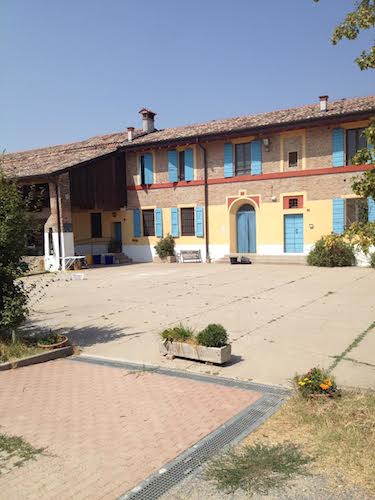 I arrived at the Piadena train station an hour later than my expected arrival.

The station was larger than most we had passed on the way, this one having a platform and small building attached to it. Most of the stations were a simple overhang, a bus stop like structure, so overgrown it looked as though no one had stopped there in years.

One of the stops was a home, a lived in home, with stained laundry hanging in the yard and a station stop sign affixed next to the second story window. I imagine this family had been planted in the region so long they earned their own stop.

The Italians plant roots. For better or for worse, children living in rural areas typically never move out of the house. They marry, start having babies, and live in the basement. The grandmothers take care of laundry and gossip, the mothers make sure the babies are fat.

On cue from the conductor I exited the train, eyeing the platform for the farmer I had traveled to Lombardy to work for over the summer. The station was deserted save for a man inside on the phone and a simple garden to the left with a cherry tree and enough green grass to sleep comfortably.

It would serve a better arrangement than the hostel rooms I had shared with drunken men in Rome the nights before. I sat on the platform bench for well over an hour, too tired from the hustle and bustle of days spent in Rome to care if Francesco was coming for me. The sun gave up on the day and sunk deep into the west, emitting a faint glow, rosy as summer peaches in an indigo sea.

The night was hushed, save for the man jabbering away inside on the phone.

A soft voice floated across the platform. It was a stout, wire haired farmer’s wife who had come to take me home.

“I suffer very much out here,” Mikala confessed to me on the drive home. The air was so inebriated with earth and living as we drove deeper into the countryside I didn’t quite believe her.

The Cecere’s farm house was a very long, rectangular building, almost offensive in its plainness. It was a camp for children during the early summer months and two large bunk houses were attached to the Cecere’s living quarters.

The exterior was blond brick with garish canary yellow and turquoise accents and was surrounded by a large stone parking lot and rotting barn. My housing was the entire bunk house—two large rooms stacked floor to ceiling with beds, and a smaller white washed room with two beds and a desk. I chose the smaller room, and was later grateful for the two beds as it became a nightly ritual to move from one bed to the other when I had soaked the sheets through with sweat. The room smelled of musty paint and stories being read by candlelight.

Every morning that summer we ate homemade yogurt, fermented in the sun, with chocolate hazelnut granola. Francesco would drink his espresso from his empty yogurt bowl, and I would drink mine from a tiny espresso cup with Sebastienne from the Little Mermaid promenading on the side. We ate in cheery silence, Francesco never failing to ask, “More?” after I had finished.

Following breakfast we would trade off doing dishes or taking care of the animals. I would usually volunteer to feed and water the animals because I liked their company and Francesco’s back pained under the weight of the wheel barrow. He never complained, but he would stop every 20 feet and lean back, his hands supporting the small of his back.

We were lazy that summer, Mikala, Francesco and me. The sun tanned us and sapped us of life force. Mikala and I harvested zucchini and tomatoes early in the morning, bemoaning our mildly aching backs and bug bites with unabashed melodrama.

In the afternoon I would pick apples, seeking shade under the branches of the ancient trees. The apples smelled like grandmothers and change, carrying the dusty earthen taste of roots and promise of cool autumn. They were speckled and bug ridden, and I would hastily stow away any intruder free fruit if I was lucky to find one.

I would pick figs, too, but the trees were so small they offered no relief from the smoldering sun. Such as the wild mossed trees in Ireland, or the cobblestone streets in Oxford, figs hold ancient wisdom of their land near and dear. When they are perfectly ripe, one only has to gently tug and they release themselves, a willing gift. They taste enchanted—golden, like a fairy tale. Delicate as a rose, intoxicating as honeysuckles in mid-May. A fig is a ceremony. A liturgy of Earth’s bounty.

Such exertion called for espresso and lunch, and we would sit together, always, for our mid afternoon meal. It was blazing outside, yet a good frittata was always worth the added heat of the oven. Lunch was sacred. Lunch was rest.

Canning took place in the late afternoon. We would dump our meager bounty of meal-worm infested tomatoes and wash what rotting bits we could. After pared down and scoured for worms, those tomatoes were the rubiest, sweetest jewels. Sometimes meals were solely tomatoes sprinkled with sea salt and globs of olive oil. No one complained.

We also canned apples; peeling, slicing and mixing them with sugar, lemon juice and cinnamon to make a type of mostarda. The mostarda would sit out for a day, allowing the natural juices of the apples to release and allowing bits and pieces to be stolen after an afternoon espresso.

There were no neighbors within walking distance, but sometimes Mikala’s amica, Francesca, would help with canning. Neither of us spoke the other’s native tongue, and we communicated with our poorly-paid-attention-to college French.

The rest of our communication was big silly grins and “fantastico!” when we found a particularly large worm. At the end of the day we compared cuts from carelessly peeling apples, usually from giggling at one another’s delirious, heat induced behaviour.

Late afternoon practiced some sort of voodoo. The sun cast ethereal rays over the dry, dusty land. Every day I would ride a much too small bike through a path in the woods that led to a large dirt road. The road was elevated with corn fields struggling in the valley to the north, and the river Chiese to the south. On particularly sweltering days I would bring Little Women (the only literature offered to me in English) to the Chiese and strip to my underwear. Only once did I look up to find three boys on the other side of the bank pointing and laughing at me.

At times on my way back, I would stop and visit three monks’ skulls at an abandoned monastery. The skulls rested in a big, rotting wooden box in the middle of the dirt yard; two of them still with hair on their heads. I thanked them every time, though I’m not sure why. Perhaps for letting me take part in the past with them, perhaps because they made up my small band of comrades that summer. Mikala, Francesco, Francesca, Ringhio and Aloo, the gots, honeybees and worms, and the monks’ skulls.

Nights were a celebration, a short relief from the tyranny of the heat. We ate what we harvested that day: figs, peaches, apples, zucchini, tomatoes and eggs. Often it was not enough, so we filled our bellies with stale frozen bread, mopping up fig juice and olive oil. Sometimes we would dip the bread in our wine to mask the staleness—a sordid communion. When there was not enough money for meat or cheese, there was always enough money for wine. Hot and red and murky. It eased the financial burdens of the farm and we offered our laughter to one another, a secret, knowing language.

One night, Francesco’s parents came for a visit. The previous evening we had dined on stale bread soaked in vinegar and water, and we were excited for an excuse to feast. Francesco purchased sausages in town to grill on his handmade brick oven. He and his father strutted around shirtless with their sunburned bellies, busying themselves with farm talk and offering me a, “Ciao, Ciao, Bonjourno, Bonjourno,” when I tread too close to their man cave.

Francesco’s mother made a ratatouille of eggplant, tomatoes and garlic, preserved in quarts of olive oil and a tiramisu. I provided a bottle of sparkling red wine and a flat nut cake with the consistency of granola I had purchased in Mantova earlier that day. Francesco’s father supplied limoncello, which he offered to me before, during, and after the meal hoping to receive a comical facial reaction from the potent boozy lemon. Maybe I kept making faces so he would offer more. We all dined until we were full that evening, a rarity as the summer bounty offered less and less.

The moon glowed opal that night, and the crickets sang a silver song I swore I’d sung in church as a child. A night breeze dusted my sunburn as I walked through tomato vines reaching towards constellations embedded in a velvet sky.

Rain finally came, announcing its arrival with pungent minerality. The Chiese swelled and gave life to hundreds of different creatures: frogs and snails and snakes slithered and rollicked across it’s steep banks. The chickens laid a few more eggs that day, and we sat in the kitchen, canning abandoned, espresso in hand, the sun fermented yogurt being ruined in the downpour. We sipped our espresso and felt the rain ignite our tenuous bones.

That virgin land reeked of earth, pure in its preservation of air and mud and foliage.

I smelled Italy the other day, when the earth was heady and sweet as jasmine after a summer rain, and tasted it in a black espresso redolent of stale juniper berries. We laughed and rubbed olive oil on our sunburns that summer, not impervious to the heat and hunger, but impervious to the discontent and weariness that breeds when one has more than is enough. 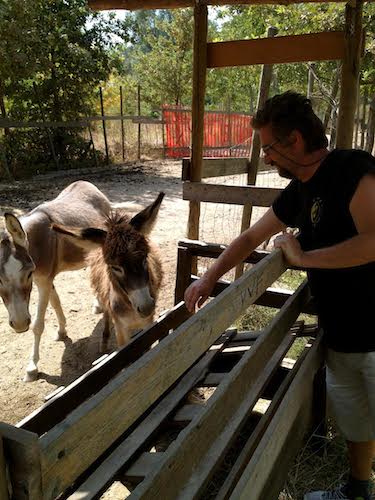