How to Shuck a Coconut. ~ Gregg Lowe 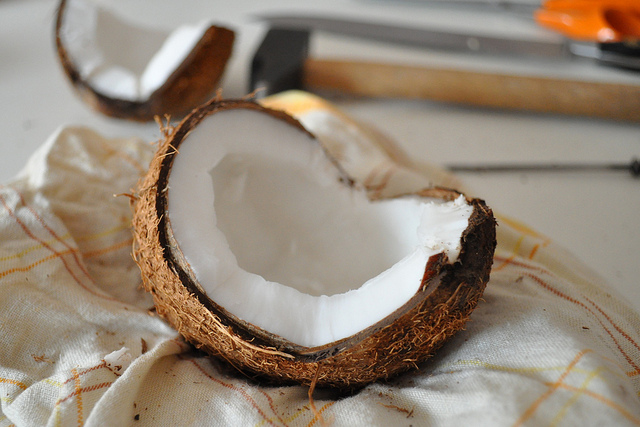 Every time I leave the super market cradling a coconut and claiming it as my own (after paying for it of course), someone will stop me to ask: ”You gonna eat that?” and ”How do you open it?”

So here it is…for any of you inquisitive supermarket shoppers:

How to Shuck a Coconut:

Coconut is fast becoming the nut of all nuts—even though, in truth, it is actually a fruit.

Versatility is its middle name.

The oil is revered by health gurus for its abilities in the kitchen and in our bodies. A jar of organic coconut oil has recently replaced both my hair product and moisturizer.

The water is sold in every health food store as a sweet isotonic beverage, the meat of both young and old varieties is versatile and delicious, and when all is said and done, the two halves of the shell can be used to recreate the clippity-clop of horses down an old, cobbled London street.

Coconuts are fierce, too: there are more coconut related deaths per year than Shark attacks!

But, if you’re not a small Southeast Asian child with a machete the size of a baseball bat and the skills of a samurai, how the buffalo do you get into the blooming thing?

Well do not fear, I am here to give you a couple of different tried and tested strategies on how to safely get your nuts out.

The first step is to choose your poison. Young or old?

The young ones, which now seem to dominate their own corner in Whole Foods, are the type offered to you in the Bahamas or whilst sunning yourself on white sandy beaches—the water is much sweeter and reminiscent of those blue monkeys that line our shelves these days, and the pulp is soft and squiggy.

The old, or more mature—to phrase it in a less ageist fashion, are the guys that you can never win at the fair. The water is still tasty but not as sweet, and the flesh is hard, thick and crunchy.

The young coconuts are much easier to get into.

Simply take a big knife and chop four adjoining lines in a square-like formation across the top—a few chops should do it. You can then pry open the “roof” and either pour or straw the water out. Then, take a small spoon and scoop out the soft, sweet meat.

If, like me, it’s the latter you prefer then read on.

First you should ask yourself: do I want the water?

“Why wouldn’t you?”, would be my response, but if you don’t, then you can skip this part and go straight for the smash and grab technique.

If, however, you do want to maximize the coconutty goodness and drink the water too, the best way is this:

Locate the three “eyes” on the bottom of your nut (these are the weakest points) and using a corkscrew you can slowly drill through them, then reverse screw out. Do this on all three eyes, otherwise the water wont pour out—vacuums and science say so.

Failing the corkscrew method, you can take the ol’ screw driver and hammer combo and force your way through the eyes—be careful though, this version requires much more dexterity and caution.

Once the holes have been drilled, you can pour it in to a glass and refrigerate it till later or straw it right out of the nut if you just cant wait.

If the water tastes soapy like washing liquid then stop, return to the store and demand an exchange—you’ve been sold an a rotten one—and trust me, it will not taste good.

One method for getting the meat out (my favourite) simply involves a plastic bag and a hard surface. Place the coconut in the bag, wrap it up, and hurl it at the floor. Note: do not do this on tiled floors—nuts are harder than tiles and will result in angry tiled floor owners.

A few smashes will do the trick and the nut will be broken in several pieces in no time…and you will feel like a primal ape.

Alternatively you can use a hammer or mallet for the same result. The use of the bag can be a handy addition in this method too as it stops the bits from flying all over the place.

Once the nut has become many little pieces of its former self, you want to use a butter knife—now this is important; use a butter knife, a blunt one. Don’t be tempted to use a sharp kitchen knife. You will almost definitely slip and sever something and it actually doesn’t improve the technique anyhow (I have done both).

Take the knife and wiggle your way in where the flesh meets the shell. Once you’re in a bit, use the force of leverage and pop a chunk out. See how much you can get out in one go—it’s quite entertaining and equally frustrating at times.

Sometimes a stubborn little hermit of a piece will just not budge. In this case I suggest slicing down through the meat and trying to loosen it from above, then come back in from below—usually works a treat.

Once all the meat is out, you want to rinse it good and proper under some nice clean water and then you can munch away.

The best way to store it is to put it in a glass Tupperware dish or bowl (don’t use plastic, you don’t want to be absorbing that stuff into your nuts) and cover with some pure filtered water. Place it in the fridge and this will keep it moist fresh and juicy. It actually sometimes tastes even better after having been stored this way for a day or two.

You can always use the meat for several other jobs—stick it in a blender to make coconut sprinkles or slice it up and toast or roast it, yum! You can even make coconut butter from it using the same technique as creating almond butter.

Whatever you do with your new treasure, be sure to utilize it to the full. Prepare and share with mindfulness.

As many hand painted signs would tell us at monasteries in Thailand: ”Do not meditate under a coconut tree.”

3 Naughty things I do with Coconut Oil. {Adult}

The Magic of Coconut Oil. 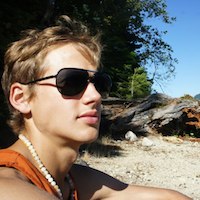