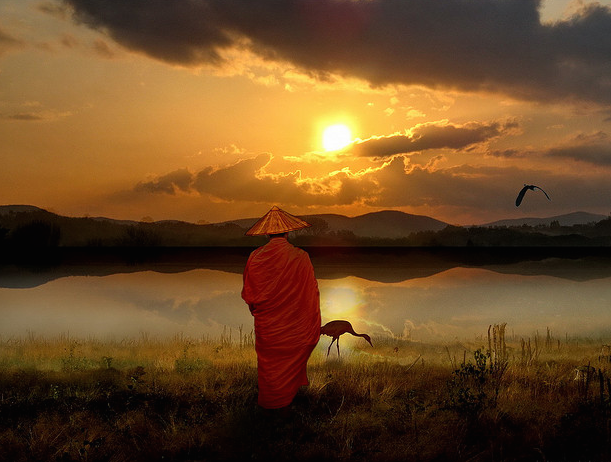 I am reminded of the phrase from Dogen’s book Moon in a Dew Drop—“The entire world is the dharma body of the self.” What teaching wants to come through in what otherwise seems irreconcilable?

The mirror I am looking at is fierce and intense, being the prey, seeing the prey, and stalking the predator so that it can dissolve into its rightful place away from the container of practice.

My recent experiences have been two-fold:

1) a student-teacher relationship with a Zen teacher-predator who did not harm me
2) my experience with a yoga master predator who did harm me, and is still living and teaching

I met Roshi when I was 18-years-old at a Zen training center. He was old like a tree is beyond time. He always patted my head and I became his student through a five-person ceremony in the zendo. It involved a simple acknowledgement that I would be receptive to the teachings of zazen, the lighting of incense, and a profound silence.

Silence so loud it reverberated in me for months after the sesshins that I sat. I was the rebel, the youngest of the nun-monk-posse, still learning to not be in a bad mood when I had to wake up at four in the morning to chant in a language I did not understand.

In the walking meditation before sunrise, I imagined myself and the bald headed ones walking the creation of each day via the cosmos.

There was plenty of time for surreal experience in the fire of practice. I wore orange velour sweat pants under my drab black robe, because it was the only indulgence I had left. Often a sliver of orange peeked out and made even the sternest stick bearing monk laugh. I had found myself in Roshiland. This was RInzai—the most martial of Zen orders.

When you started to drift into thought or sleep, and it was detectable, the head monk would come to hit your pressure points. This tap was intended to awaken you to the immediacy of the moment. It never hurt. Sometimes it worked better than a cup of coffee. More often than not, the seriousness of the ritual and the dramatic frown that they wore made me laugh. There was an ongoing exchange of laughter between us and I must have appeared like some alien wild haired youngin’.

In Zen, there is a tremendous emphasis on interviews and in the interviews, the teacher gives a koan (or question) for you to work on while you sit. My first one with Roshi was Where are you?

I sat with that question for many meditation sessions and I’d think I had the answer. He’d ring his bell and I’d get up, rush to him and deliver some quirky demonstration. He would ring his bell and usher me away. Later, I would fall in and out of meditation and think, damn I am bored with this, when do I get my next koan?

He’d ring his bell and I would be ready again with an answer and he’d say Where are you? And I did not have it—whatever it was. How can you answer the unanswerable? I would curse in my head and feel defeated—this game sucks.

One day I snuck away during a rest period and went to sit under a tree—otherwise known as my little Buddha moment. I found myself being there and breathing under the tree. It felt really good—better than the zendo. I could have sat there forever and forgotten all about the smoke and mirrors of the Zen center but it was time to go sit again with the group.

I found my zabuton and sat down. Roshi rung his bell. I swiftly got up just because I felt like it was time to meet him. I didn’t think I had any answer. I ended up being one of the first to see him in interview. I walked in, he looked at my face, exclaimed “Ahhhh yes,” and then rung his little bell and sent me away.

That was my last moment with him. I left the Zen center shortly after, feeling like it was time, the pulse of where I was palpable and no part of me wanted to do another sesshin. My body was tired, and my consciousness had been blown open.

I later learned that the Roshi had been accused of sexual misconduct with his injis (or personal attendants). Having been an attendant myself to a yoga teacher and knowing the disruption of power and abuse that that subservience can create, I believe what they say about him. While I never saw this side, I have no doubt that he was a very complex man with a dark shadow. At 107 years of age, Roshi passed away and I feel a mix of emotions—resolution, a quiet sadness and peace. This is the epitaph I wrote:

The Roshi I studied with passed away. He was controversial in his later years and seen as a predator. He never harmed me but I don’t doubt the reports of his misconduct. I was 19 and he was nearly 100 years old when I sat with him. What I learned from him like many of these personalities is that there is the practice of being aware—of sitting upright in the midst of it all and there is the weaknesses of each individual and the individual karma they bear.

Somewhere in the dance of practice and karma lies our dharma and the answer to why we are alive at this time (and not at any other time). If we can breathe, be vulnerable and in touch with our heart the momentary pain of opening to this awareness and the world dissolves. We can all realize our essential oneness and be of benefit to all beings. A teacher unlocks understanding so that our ego doesn’t take a spiritual experience and run with it (prevention of all of the silly and horrifying things that that can do). However, all a teacher can do is unlock our limitations. Hopefully in haste they do not create more suffering. Teachers have no special powers beyond pointing to what we already know. They can and may be as flawed and twisted as the rest of humanity.