When someone in your Yoga class appears to Hate your Guts. ~ Jean Hackett 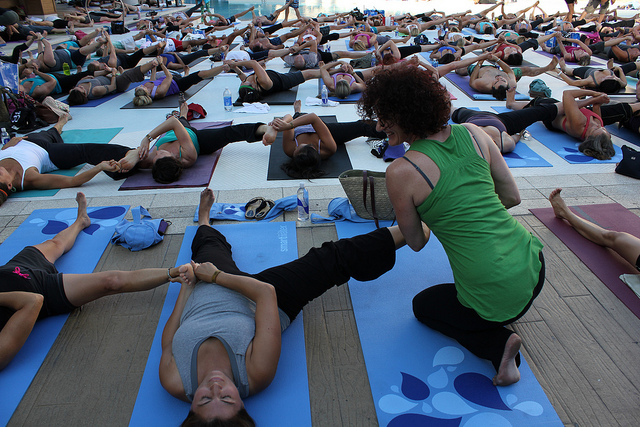 It’s always fun when someone in the yoga class I’m teaching appears to think I suck.

I’ve experienced more than a few curdled faces during my four-years-and-counting teaching journey—after all, didn’t I once teach the worst class ever? There’s the guy who looked like he’d made the biggest mistake of his life walking through the studio door.

The young woman at the gym who shot arrows at me through her eyeballs as she did her own thing, including sit-ups while the rest of the class was backbending (she did not look any happier as I left the gym under the force of her Medusa-like glare which she pumped out of her head all the while stomping on an elliptical).

And then not too long ago, I found myself teaching in a new slot in a new place and again in front of another soon-to-be-disturbed face.

From the get-go her energy seemed to scream: “Hey teacher, you suck!”

I used to fear these presumed haters almost as much as I quaked at the notion of a “real” teacher, or worse, a discombobulated beginner finding his or her way into any vinyasa class where I stood at the helm. So, more times than I like to admit, I ignored them––sometimes to the merry tune of the completely fantasied internal peroration knocking about in my head.

In other words, I did not treat them like students. Worse, I shortchanged everyone in this situation, including me—I don’t recall ever receiving any benefit from any of my interior invectives and self-hating soliloquy-composition workouts, and certainly an ignored student can only benefit so much from a class where his or her downward dog is assiduously avoided.

That was then. Now, when Ms. Cold-staring yogini and her ilk appear to hate my guts I take a different, radical approach:

No matter what the look on a person’s face, I’ve finally learned that I have no idea what is actually going on in anyone’s head (except maybe the girl at the gym). I’ve encountered several tense-faced students who turn around and come back to class. Maybe it’s just a case of the Mondays, an unfortunate “default face” (Sarah Silverman’s humor there, not mine), or an expression born on a hellish post-work commute to the studio that never wore off, or maybe it’s just me projecting all that onto someone else, seeing something that is not actually there.

It’s been known to happen. And then there’s the fact that I’m a yoga teacher.

Faced with the aforementioned, I now go ahead and teach cold-staring, Medusa glaring and snickering samastitihi-ing yogis like I teach anyone else. I’m not a paid figurehead. I’m not a voice downloaded over the Internet commanding physical positions through some Lulu-bot avatar. I am a real live teacher in a class with real live students so I act like it.

Look, it takes balls to teach—or chutzpah—this is one of those times when I draw upon them. It’s hard enough to tell my three-year-old what to do, let alone other adults who already know how to use the toilet. But I do it. Otherwise, I am not being a teacher. And frankly, to do anything less is just not fair.

Generally speaking, though, it starts with recognizing the person’s presence in the class as a student, which starts with getting his or her name. It also starts with the opposite of fear and avoidance, that is, I try to open to the person and to stop prejudging him.

Name in hand, as I move around the room towards her, I remark about something going on in cold-staring yogini’s practice that truly looks wonderful to me––I start with where we might agree (wait, I’m getting a David Garrigues tingle here).

Assuming all the energy coming back to me reads copacetic, I move on to verbal cues, starting with those that focus on augmenting the wonderful things I have truly seen already in his or her practice and as things between us open, maybe beyond (but I’ll likely avoid physical contact if any of the energy between me and the student is questionable).

When Keith Moore first approached me as a distrustful student in his Mysore room, he was full of this positive teaching. I loved it and tried to emulate him. It was a great lesson for me to learn that in yoga practice, teaching and in parenting, I have a lot of work to do remembering to focus on what is right rather than on what is wrong. I incorporated Keith-isms like:

“I love what you are doing here. I’m just trying to see if I can make you look even taller.”

Guess what: my immediate judgments about people by their faces and failure to follow cues are usually totally wrong. Most of these students end up coming back. Sometimes their faces change immediately upon my first contact with them; sometimes the face and actions remain neutral to miserable. A few of those in the latter category may not come back. Of course, I’m not for everyone. Either way, I still have fun teaching. I wasn’t being facetious in that opening line: actually, it is always fun to have someone who appears to hate my guts in class.

Because I love to teach.

The more I see the futility and flat out incorrectness of my snap judgments based on appearance, the more I stop creating this otherwise imaginary wall between me and anyone else in the room. I have to remind myself how many times I was and am this student—haven’t I glowered about an unexpected two-bit-mala-bead-toting-twinkie-punk-ass-wanna-be-yoga-chick-sub, shown up essentially unteachable, or arrived on my mat wearing fresh anger from the cold or a fight I’d had with my husband on the way over?

I have to remind myself that every person is an opportunity. Including me.

As for my more recent encounter with cold-staring yogini, insecurity still wracked me as I watched, horrified as cold-staring student spoke with the studio owner after class. The owner called me over.

“That is so sweet,” I was trilled, remembering her absolutely lovely face.