Some people cringe at the word forgiveness.

I know because I used to cringe anytime I heard that word.

I used to cringe with immediate thoughts of all those who I thought didn’t deserve my forgiveness. Those people who did things to me that were unforgivable.

One day at the age of 21, I was led to forgive one person who had hurt me. He didn’t do anything that I considered to be unforgivable, and I truly wanted the relationship to be healed because I loved and love that brother very much. It was just some young men ego flare ups that erupted to words we used to hurt one another.

As I sat outside my apartment next to a tree praying about it, I first asked for the strength to forgive him. Then I said the words aloud, “I forgive you brother.”

It was indeed the first time I had forgiven, and the floodgates within my heart opened. I could have stopped it, and my ego tried. My ego was screaming at me saying, “You’re in a moment of weakness.”

The ego reminded me of the many forms of vengeance I could and should give to those who harmed me. The ego screamed, “You’re soft, weak and a coward.”

Interestingly, the softness of my heart’s voice carried more weight in that moment. Although my heart was not screaming, it was clear, and made perfect sense, not logically, but spiritually. I knew that the logic of this world nearly consumed me to death too many times for me to trust it any longer.

Forgiveness did seem illogical, but so did the suffering that not forgiving had caused me my entire life.

I pushed through the loud voice of the ego, and went with the certainty of my heart.

As I began to say the names of those who had hurt me, tears began to flow with the memories of what was done to me. As the tears flowed, I couldn’t see with my eyes, which made seeing with my heart easier.

Upon saying each one of their names, asking The Creator to forgive them, I then let God and each of them know I forgive them as well. I nearly choked on the words “I forgive you.” While telling each person I forgive them, I threw up more than once. Some of them had since passed on, and others I had not seen for years.

There I was, tears blinding me, crying the kind of cry that makes your entire being shake, and vomit was everywhere. Sounds fun huh? No, it wasn’t fun, but it was a purging that I needed, and didn’t know I had asked for.

You see, I asked The Creator to heal my life, and make me the way The Creator needs me to be, because I had lived as I wanted my entire life. I lived with the logic of this world, and the loud voice of the ego for 21 years. The logic of the ego that yells, “If you hurt me, I’ll hurt you. If you wrong me, I’ll wrong you. Some people don’t deserve forgiveness, and some things are unforgivable.”

The logical approaches didn’t alleviate my suffering. The numbing agents in all their forms only provided temporary fixes. The seemingly illogical, and soft voice beyond my ego called me back to where I was hurting—my heart.

My hurt, pain, and anger blocked me from my heart for so long; but my heart called out to me from the other side of the hurt, and I walked towards it. That walk, although very messy at that moment was the most significant walk I’ve ever taken. I didn’t have to forgive, which is why it’s forgiveness.

It wasn’t until after that moment that I knew what lies beyond forgiveness—freedom.

Am I telling you to forgive? No, I respect you too much to tell you to do anything. I’m simply sharing my experience.

Did I allow people who hurt me back into my life? No, we can have healthy boundaries and forgive. Was what I forgave easier than the things you may consider to be unforgivable? I believe if we compare what is forgivable or unforgivable we have lost sight that whatever our experiences are, someone has forgiven someone else of what we are choosing not to. Some would place the actions of the person who murdered one of my family members as unforgivable. Others would say that the actions of the person who violated me and some of my friends when we were children are unforgivable.

The Creator gave me the strength to forgive them and everyone else because I asked for it. That same strength is accessible to all. Opening the door to forgiveness has never made me immune from pain, but healing happens quicker.

The virtues of courage, fortitude, wisdom and humility are ours to carry or put down regardless of where we live or how we grew up. I have learned that forgiveness is the culmination of these virtues all into one.

It takes courage to walk back to our heart; fortitude to continue to forgive; wisdom beyond logic to listen to the voice of The Spirit, and humility to know The Creator will have the final translation on everyone’s life, regardless of perceived translations we would like to place upon ourselves or others.

My experience is that keeping the door of forgiveness closed hurts us more than it helps. Not forgiving takes the painful moments in our lives and turns them into the rest of our lives, making time stand still.

When we allow time to hold hands with forgiveness, time no longer stands still, but moves us towards and within the healing we long for and deserve. 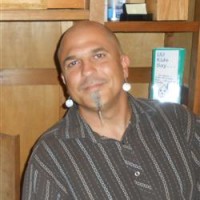