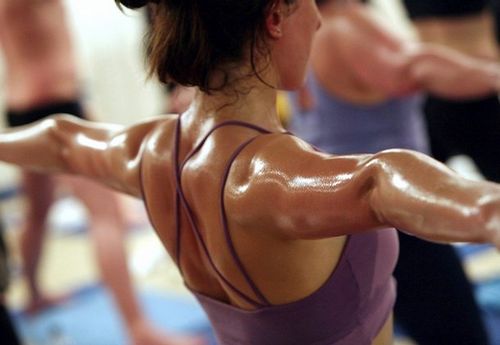 Bikram yogis attribute tremendous health benefits to this yoga practice from improvements in diabetes symptoms and thyroid conditions to weight loss. Given its ever increasing popularity, it is no surprise that media outlets like Time and Glamour magazines and the Yoga Journal have featured stories on a variety of topics related to Bikram yoga.

While most media coverage on Bikram yoga seems to focus on the founder, Bikram Choudhury or anecdotal information about the practice, a few recent magazine features have cited actual research studies.

Perhaps the reason for the scarcity of these features is the lack of published research on Bikram yoga.

Although thousands of practitioners all over the world boast of the many health benefits of Bikram yoga, only a few studies have scientifically documented any of these claims. To date, there are 11 published studies on Bikram yoga and three of these publications are case studies.

Recent articles in both Time and Glamour magazines posed the question, “Is Bikram Yoga Good for Weight Loss?”

Using recent data from an unpublished study at Colorado State University on the caloric expenditure of the 90-minute Bikram series which revealed that a mere 300 to 400 calories on average were expended during a single class for women and men, respectively, they concluded that Bikram yoga is not good for weight loss due to the low number of calories burned during class.

Further substantiating this, they cite findings from a study published in the March, 2013 issue of the “Journal of Strength and Conditioning Research” which showed an insignificant weight loss of about two pounds among healthy individuals practicing three times weekly for eight consecutive weeks.

As a research scientist and as a co-author on one of the studies in question, I am often frustrated at how science is misinterpreted and misrepresented in the media.

I fully understand that articles need catchy titles and angles to maximize reader interest and readability. However, presenting a one-sided, often inaccurate version of the truth is unacceptable. As for the question of whether Bikram yoga is good for weight loss, the truth is that no study has ever attempted to fully address this question.

No Bikram yoga study has ever been conducted in individuals trying to lose weight.

The closest study available is one which I conducted along with a team of researchers at the University of Texas at Austin now published in the October, 2013 issue of the “Journal of Bodywork & Movement Therapies.” This study showed that adults classified as obese according to their body mass indexes lost a slight, but statistically significant two and a half pounds on average over the course of eight weeks of Bikram yoga with no changes in diet.

The fact that Bikram yoga doesn’t result in large amounts of weight loss over an eight week period isn’t surprising given that most studies also show the same for cardio workouts when diet changes aren’t incorporated.

According to the American College of Sports Medicine’s position stand on exercise and weight loss, “Appropriate Physical Activity Intervention Strategies for Weight Loss and Prevention of Weight Regain for Adults”, moderate levels of physical activity of any kind are typically ineffective in producing large amounts of weight loss and that most exercise interventions only result in modest weight loss of about two to five pounds, numbers which are more than quadrupled when diet modifications are implemented.

The position stand goes on to say “it is difficult for most individuals to achieve and sustain these high levels of physical activity” such as those needed to lose large amounts of body weight.

In general, although touted as a great tool for weight loss, exercise isn’t that effective for losing weight unless performed in very high volumes or combined with changes in diet. It does, however, tend to be an effective means of maintaining a healthy body weight.

Had this information been included in the recent articles in Time and Glamour magazines, it would have provided readers with a better perspective on the topic.

The Time article also attempted to answer the question of whether hot yoga was good for you by citing research on yoga showing reductions in mental stress.

While it is true that research suggests that yoga has a de-stressing effect, there are several studies on Bikram yoga specifically which show numerous other health benefits.

While it is true that precautions should be taken before and while engaging in any form of exercise, especially heated exercise, it is important to examine both the pros and cons in order to make a sound decision of whether or not to take part.

There’s a lot more to Bikram yoga than just modest amounts of weight loss when you look at the whole picture.