Vegan Privilege: Is There a Place for a Vegan in West Africa? ~ Colette Coleman I’m too health conscious to eat meat when a plant based diet has been shown to reduce chances of disease and increase energy and longevity.These thoughts or some form of them wander through the minds of vegans everywhere as they encounter a world that’s shifting, but still largely carnivorous.

A friend of mine recently told me that he’s on a vegetarian challenge with another friend to see how long they can avoid meat. I was thrilled, seeing this bet as a sign of the evolving times; Even barbeque loving boys were seeing the vegetarian light.

My elation didn’t last long, though—when I asked what they were betting, I learned it was a steak lunch for their entire office staff.

I’m not sure if that bet and its prize are a step in the right or wrong direction, but maybe the good and bad encompassed cancel each other out. Meat eating friends aside, I try to spread the good vegan word through education about the choices. We have the choice to proactively eat cancer-fighting foods.  We have the choice to use our purchasing power not to support animal cruelty and factory farming.Or do we?After spending my summer in Senegal, west Africa, I realized being vegan by choice is a privilege.Before I left for Yoff, a small area outside of the capital, Dakar, I was told that the Senegalese wouldn’t understand my being vegan. For one, meat costs more than eating just bread or rice, so it wouldn’t make sense to turn down a more valuable food in favor of one less coveted. 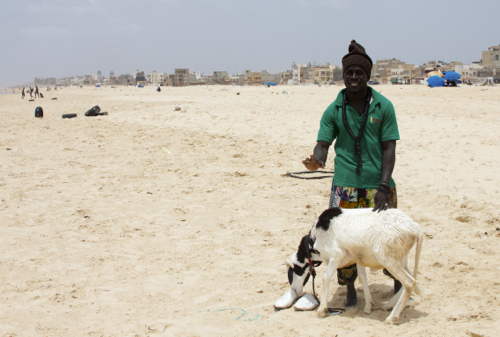 Second, I was working in a pretty disadvantaged community, in which many people had limited food, so the idea of turning away food for a philosophy seemed incomprehensible.

Given this context, I wasn’t sure what would be the most respectful way to turn down meat from hosts. I wondered if I should say I have stomach issues with meat, so I didn’t seem ungrateful.

Lying didn’t seem like such a respectful approach either though, so I decided to stick with the truth. My first host responded to my plant-based diet preferences by asking if I was a Rastafarian. I felt a wave of relief from that reaction, intimating that vegetarian diet wasn’t unheard of in the sub-Saharan world.

As my time in Yoff went on, colleagues pushed white rice towards my portion of the giant round metal plate off of which all ten of us ate, circled around crossed legged on mats on the floor. In turn, I pushed saucy fish bits their way.

I watched the street children stop into our community center to get food, and eating with their hands, shove it into their mouths and race to grab bits to put into their bowls they used to beg for money. In those moments, I felt shame from the disparity in our privileges. 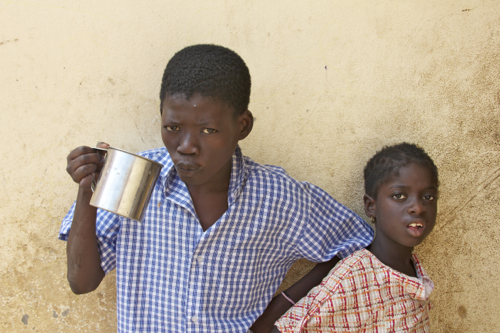 Not only did I have the privilege to have always known I had more than enough food, I could turn the most nutritious of it down.

At home in the US, meat may not be my most nutritious option, but in Yoff my other food choices were baguettes with chocolate spread or white rice, so protein-rich poultry and fish were clear nutrition winners.

There are delicious and nutritious Senegalese vegan foods. I asked the woman I was staying with if she knew of a bean dish I read about in the guide book, and the next day a homemade peppery bean stew appeared. It clearly took a lot more work to prepare than a baguette with butter, and with no refrigerator to store leftovers in, the effort was hardly worth it unless there would be a vegan family meal. (The other family members preferred their usual fare.)

I was surprised to see that even middle class families with televisions, jobs, and satellite TV didn’t have refrigerators.

The need to eat meals and meats pretty soon after their preparation changes how the Senegalese see food, making it more communal to ensure there aren’t wasted leftovers; it also fosters a unique appreciation that acknowledges that it is an ephemeral necessity.

My relationship to food in the U.S. has been quite different. Of course, much of my plant-based diet is perishable, but there are an abundance of markets, 24-7 delis and refrigerators in every house I’ve ever visited in America. Knowing food will be there and that I generally have the money to buy it, takes away some of the appreciation I found in Senegal.

Of course, I try to be grateful for my food and avoid shopping at 24-7 delis or buying items that have long shelf lives, and thus clear chemical composition. In fact, I try to think a lot about my food, its composition and where it comes from.

Part of the reason that I became vegan was because of the torture in factory farms.

As much as I love yogurt and cheese, every time I took a bite of those animal products, I’d think of where they came from. From what I saw in Senegal, the food chain was a lot cleaner. At the beaches, fishermen went out in colorful boats to catch dinner and make a living, and goats wandered the streets.

I even sensed some pride in owners with their goats strolling on the beach; eating animals and their products seemed a lot more palatable in this climate.Nonetheless, after having not eaten fish in years, I wasn’t drawn to try it or any other meat on this trip. I lost a lot of weight while I was there on the white rice diet, but I gained an appreciation.

Of course, I know that in the U.S. too, many people don’t have the time and money to prepare or buy vegan, or even healthy foods. As I continue to make the choice to be vegan, I do so with gratitude that I can.

Since I returned from West Africa, Ebola has resurfaced in Senegal’s neighbor countries, including Liberia and Sierra Leone. One way that the virus spreads is through bush meat. Bush meat preparation involves risky handling of bloody, potentially Ebola infected animals.

Suggesting a vegan diet as a cure for Ebola would be flippant and callous given the current tragic state and lives being lost. Nonetheless, this recent outbreak suggests that attention to meat sources is crucial across the globe.