A Pioneer Woman I Am Not: Tales from Operation Outhouse. 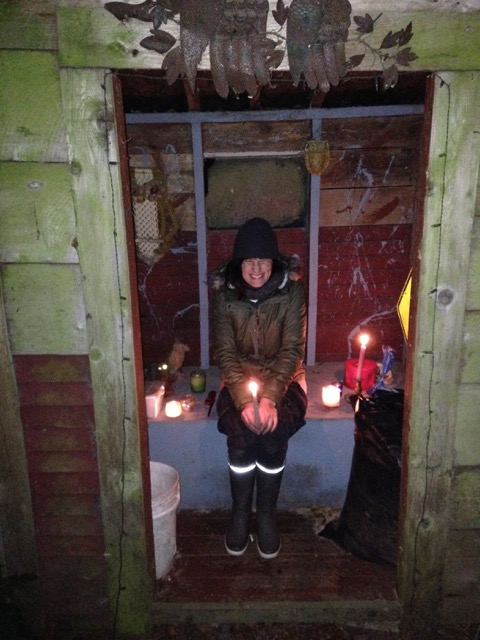 I’m trudging down the dark path from the cabin.

My toes are freezing despite being snuggled in wool socks.

The cold autumn leaves crunch beneath my fleece-lined rain boots. My hands are gloved and tucked inside the pockets of my winter coat. A wool beanie is doing its job keeping the heat from escaping my head. I’m wearing leggings underneath my pants. A headlamp illuminates the way.

Am I braving the cold to gaze at the constellations in the clear, late-fall night sky?

I am on my way to the outhouse to poop.

Our septic system is not working. We live in a small cabin on 10 acres in the middle of an old spruce forest on a small island in the Pacific Northwest. Our closest neighbor is only a few hundred yards away, but alas, he is my boyfriend’s brother and he also shares our septic system, so he shares our pain.

Yesterday my boyfriend noticed an unusual amount of water sitting around the septic tank and deduced that the pump hadn’t been kicking on, and then further deduced that there must be a back up or a clog.

And now I have to go, I mean really go, and there is no time to get in the car and drive down the road to the other closest neighbor’s place.

So now my freezing white butt is sitting on an icy cold toilet seat, in the dark, in an outhouse, without a door, with pictures and quotes from Thoreau, and woodcuttings of owls staring at me—their beady eyes questioning if I’m tough enough to survive 24, 48, maybe even 72 hours with no working toilet.

Rather than reading Thoreau and engaging the owls in their inquisition I ignore them all and think, Why couldn’t this have happened in late July when the weather was warm and the chill in the night air is a welcome relief, rather than now, in late November during a polar vortex, on the coldest day of the year when the mere thought of sitting on this icy throne makes my sphincter tighten up?

We are on Operation Outhouse: Day Two, and I am freezing my ass off, literally, at 10 p.m. because I have to go poop.

Earlier in the evening I actually considered skipping dinner because, well, we all know where that would lead, but I couldn’t pass up a big, juicy burger and a glass of red wine. We’ve instituted an indoor potty, (i.e. a bucket with a toilet seat, commonly known as a camp toilet or a luggable loo) so peeing inside overnight is fine, relatively, but unless we want to smell feces in the bucket all night—did I mention our cabin is a cozy 400 square feet?—it’s the outhouse for the deuce.

So here I sit, Brazilian wax devotee, bare-assed, outside on a cold toilet wondering how in god’s name did the pioneer women do it? They lived on beef in the winter. It was a source of warmth. If they skipped a meal, they risked starvation. On a cold night they couldn’t just opt not to eat beef because they’d have to have to leave the warm comfort of their beds to go outside and poop.

Oh man. It. Is. Cold. And I’m dreaming of a time not long ago when I comfortably pooped inside my cabin without layers of clothes on.

Operation Outhouse: Day Three and my boyfriend is sitting at our dining table thumbing through the septic tank manual for probably the third time, reading every last detail trying to troubleshoot the problem.

God love him, this outage hasn’t really affected him. He poops once a day, first thing in the morning. When it’s somewhat above freezing. This is his cabin. He’s lived here for some time. He had the septic system installed, so he’s somewhat familiar with what’s happening out there in the pipes and holding tanks and whatnot.

I am a newbie. I’ve lived here for a few months, and now I am standing at the kitchen sink watching him, swallowing hard, debating at what point I should ask the inevitable question. I decide there’s no time like the present. I’ve been using an outhouse two days more than I have in my entire life, consecutively, and if it’s something I did, I’d rather confess because this problem doesn’t seem to be fixing itself.

“Has this ever happened before?”
“Nope,” he answered frankly, skimming a diagram in the users manual.
“Because I’m thinking it might be something I did, since I just moved in a few months ago and everything’s been okay up to now.”
“I’m sure it’s not,” he says giving me a sweet, assuring smile.
He goes back to reading the manual and I confess.
“Ok. So you’re probably not supposed to flush tampons down a septic tank I’m now guessing, right?”
He pauses and looks up at me. “Uh, no. No you are not.”
“Ok then. That’s the problem because I have.”
He looks at me, nods his head and patiently says, “Sure could be. Let’s look at the page called ‘Septic Dos and Don’ts’.”

This all makes total sense to me now. Now! And it’s too late, now. Why didn’t I think of this before? Our entire island is on a septic system, obviously. We’re on a freaking island. And it takes just a moment to realize that, and then another moment of logical reasoning to deduce what can and can’t go into a septic system. Can: poop and pee. Can’t: everything else.

I, however, having always lived with plumbing that empties to a central system somewhere far away that I don’t think about, rather than to a series of tanks and then a septic field that sits a few hundred yards from my front door, didn’t stop to think about how it all works. Now I’m bundling up every time I have to go, and trying to smile as I do it.

You know that feeling you have at night when you’re cozied up in bed and you’re fighting off the urge to go? Well for me, now, it’s an all out war.

It’s me versus my bowels, and I’ll let you guess who wins.

I have a newfound respect for all the women who came before me and let their lily-white pioneer asses bare the cold while they peed and pooped in outhouses. All the time. In all seasons. This is how it used to happen. This was the standard. There were no luggable loos or, “Could we maybe just let it mellow in the toilet until the problem’s fixed?”

Much like Thoreau, “I went to the woods because I wanted to live deliberately…”

And for one brief—very brief, like a split second—moment, I felt that statement in its entirety. I felt alive sitting outside on the toilet. Like I was living with purpose, with intention. I was a part of nature, the elements, the world, the moment. I was doing something. Literally, in fact, I was. I was pooping in a freaking outhouse.

This will happen again, no doubt. And when it does, it will probably be during the third day of a ten-day stretch of rainstorms. And I will find myself pooping in an outhouse drenched this time instead of frozen. And I will beckon Thoreau and praise my pioneer sisters, because though it will feel alive and mindful and intentional, they were better women than I.

Yes. Hats off to you, women.

I’ll take my gorgeous, warm toilet in my cozy, warm house any day.

And I’ll sit and poop in warm peace while I scroll Facebook and Instagram and enjoy many modern conveniences because living deliberately, yes, but a Pioneer Woman I am not.