Below the Surface of Catcalling. 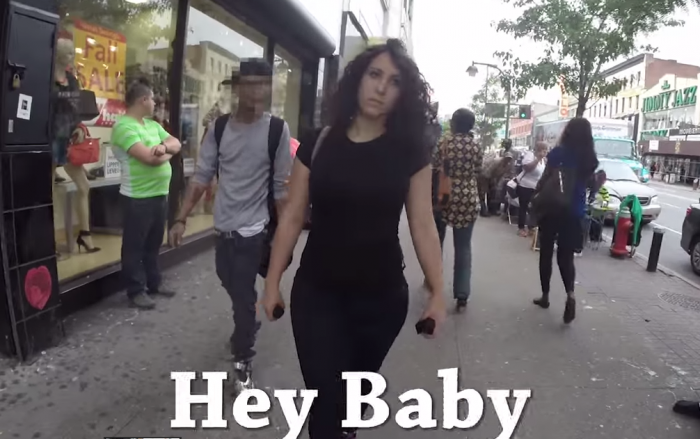 At this point the Hollaback video documenting Shoshana Roberts experiencing a slew of catcalls as she walks the streets of NYC is no longer trending.

It’s taken me this long to process the video, all the reactions to it, and what’s bothering me about this situation. It comes down to the various layers of sexual intimidation within our culture, catcalls being one of the surface indicators.

Unfortunately, that was largely overshadowed by the angry backlash at the omission of white catcallers. It was wrong of the video’s producer to edit out Caucasian men.

Concerned responses to that are justified, and I’m glad so many people are speaking out about it. However, the presence of racism and classism do not nullify the important message the video carries.

Catcalls are an indicator of how women experience harassment on a daily basis, at the most surface level. To the video’s point, we live in a culture where women are constantly and openly harassed on the street.

To be fair, not all men are catcallers. Most aren’t. But enough men behave this way to make it a chronic issue for women.

And what do these guys get out of it? We all know women aren’t stopping and giving out handjobs (or even their phone numbers) in response to “Mmm, mmm, I like the look of that.”

Not only are we expected to tolerate unsolicited opinions of our looks, or details of what someone would like to do to our body, but the offenders sometimes expect us to be grateful.

And if we’re not, we’re uptight bitches.

It’s annoying. It’s invasive. It’s generic. It can be extremely intimidating in some cases. And, sadly, it’s one of the least threatening forms of harassment.

Under the surface of catcalls, there is a second indicator of sexual intimidation that is even less widely acknowledged. Going a step beyond verbal harassment, I feel the need to mention that many women I know have been masturbated at in public. It happened to me when a friend and I were walking on the side of a road and a truck driver pulled over and got out on the passenger side to jerk off as we walked by.

He repeated this three times.

It’s happened to multiple women I know on public transportation. In a church. On the street.

Some might say it’s not a big deal, as the women in these cases, myself included, were not physically attacked. But it’s still violating and scary. To be fair, in some cases there are issues of mental health involved. And to some degree, we’re lucky as compared to other parts of the world, where public sexual assault is more prevalent and perpetrators enjoy impunity. But that doesn’t make it okay.

This experience should be a rare story, not a relatively common occurrence.

Go one layer deeper, and there is a third indicator, which is the downplaying of actual physical attacks. Some people still believe that if a girl goes to a party dressed a certain way, or if she drinks too much, she’s asking to be assaulted.

This attitude is less pervasive than it used to be, but it’s still very much alive. There are also those who would never sexually assault anyone, but perpetuate the acceptance of such attacks.

Here’s a ‘college prank’ someone told me about once:

A bunch of guys hide in a room their friend plans to bring a girl to. As the two begin having sex, they all jump out. Naturally, she tries to stop intercourse.

He continues to have sex with her, as she tries to fight him off, while all his friends watch. (What starts as consensual sex turns into rape.) The person who told me about this was telling it in a lighthearted way—he had clearly shared it before and gotten a positive reaction.

I called him out on it. Eventually he apologized for having offended me, though he clearly wasn’t able to understand the terror and humiliation caused by such an act.

The men in my immediate community would never do anything like this, which is why I consider them a part of my trusted community. However, most of us come into contact with people who would. Or might. All of these indicators are reflective of a culture that, despite advances, still downplays sexual harassment and assault, which is most often (though not always) targeted at women.

The Hollaback video provides a valuable glimpse into this issue.

Sadly, due to poor and unethical editing decisions, the video has turned into an “us vs. them” discussion. I wish there weren’t so much “us vs. them” in general. There are people of all races involved in sexual intimidation. There are women who downplay sexual harassment.

There are men who experience sexual assault.

We need to be able to accept that discrimination exists in multiple forms, and that all those forms deserve to be addressed. We need to call attention, as this video did, to the magnitude of sexual harassment and how it shows up on a daily basis. We need to take a stance that sexual assault is wrong, regardless of circumstances, or the survivor’s gender, sex, race, sexual orientation, or age.

We need to question our peers when they say something that doesn’t sit well with us. And hopefully we can keep doing all this, regardless of what internet sensation happens to commanding the feeds that week.

For more relephant discussion on the Hollaback video:

Saying, “Thank You,” is not an Appropriate Response to Catcalling

What the Catcalling Video gets Wrong

Why a Catcall makes me feel Rage for All Women