Cursing Kids: Just Funny or a Cause for Concern? {Adult language} 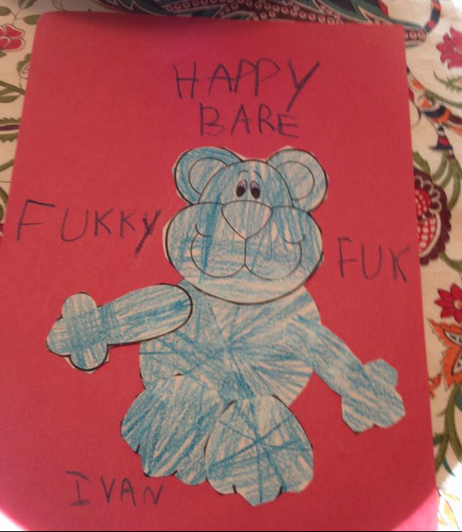 I think we all have moments as parents when our children say inappropriate words (usually loudly and in public) that they have overheard from us, the T.V., friends and family, or just out in the world where sound travels.

I struggle with this, as I think many parents do. Does it make me a bad parent that my five year-old dropped the F-bomb at Thanksgiving dinner?

Are my children going to be assholes when they get older, cursing at people to see what kind of reaction they can get out of them? There is an element of cuteness to a child cursing, but usually the word of choice is followed by nervous laughter and a thinly veiled moment of mortification.

Maybe I should cut myself a little slack. Maybe I should proudly claim that my children curse, but I am still a good parent. Somehow it is never that easy, though.

My first experience with cursing children was in a grocery store, of course. My son loudly proclaimed, in his cute, squeaky little voice, a certain expletive that made peoples’ heads turn. In a moment of wondering what I should do, I decided to calmly look at him in the small seat at the front of the cart and asked, “You want to sit? But you are already sitting.”

He looked at me with a perplexed look as if he was thinking to himself, “Wait, what did I just say? Is that what I said?” He never said it again. What a great accomplishment for me in that moment, I thought (trying to make myself feel better for the fact that he said a word he probably heard from me while I dropped something, or when I burned myself on the stove, or the 20other times I said it during the week).

And then that expletive hit the fan so many more times with all of my other children that I couldn’t possibly recall all of them. At some point, I became desensitized, but there are always great moments of absurdity or shock that are priceless, and I couldn’t possibly wish it away, like the monkey suit incident.

One early morning (about 4 a.m.) my sleep was interrupted with a break in the silence; I could tell there was someone in the room and there was heavy breathing close to my face. I opened my eyes to two faces staring at me: my four year-old daughter and six year old son.

My son was looking at me with a weird look on his face, like he had a really pressing issue to discuss, and my daughter was wearing an old Halloween monkey suit, her long blonde hair pouring out of the hood that had two cute little monkey ears poking out of the top.

As my eyes opened and adjusted, my son asked, “Mommy, what does this mean?” and as the words floated into the air, he slowly flipped me off, as my monkey-suited daughter, very calmly, followed suit.

Awww…those tiny middle fingers craning up and into my face. All I could do was tell them to go back to bed, then I stared at the ceiling for the next hour asking myself if that really just happened, tracing back the hypothetical conversation they both had before they trekked down the stairs to ask me.

They never found out what it meant, at least not that morning. In that particular case, it was just a finger. Yes, it has a meaning, but they weren’t really cursing, so maybe it will be okay. I was able to keep the little voices at bay for a little while.

But the hits keep coming, and each time there is a new level of shock and awe. When my oldest son was four, he explained to me (as he played with his truck) that it was his “fucking machine.” I thought I misunderstood him, dismissed it, and asked him very innocently, “Oh yeah? What does that one do?” His answer (very matter-of-factly, I might add): “So you can go fuck yourself with it.” Wait, what? Now, I may cuss on occasion, but that combination of words never came from anyone in my household or from the kind of T.V. we watch. What kind of preschoolers do I let him hang out with?

So, what do we do when moments like these happen? We laugh about it secretly, but how do we explain to them that those aren’t words we use without the barrage of questions and comments that follow: “What does it mean?” “How come you say it?” “Can I say it in my room if no one hears me?” That last one gets pretty philosophical, resonant of the, “If a tree falls in the forest and no one is there…” question.

I am sure there are plenty of great moments like these to come, as children love to one-up themselves and each other. I have gotten looks from other people (some are other parents who will, in a public display of hypocrisy, shame me with that look), gasps from my mother (and mother-in-law), and notes from teachers, which is the worst of the three. Some are cursing moments my children don’t even mean to do. A word to the wise: make sure your child knows how to spell the word “funky” before he uses it in art class; otherwise, “Happy Bear funky funk” becomes a nightmare moment for all involved.

What I have learned about these moments is that I have taken away some pretty incredible memories of my children. These are moments that make them human and reveal my own humanity. No one expects me to be a perfect mother but me, and I know that I can’t be. So what’s the big deal? The fact that I am concerned maybe means I am doing something right. Maybe. All I know is that no one else has an original picture of the “Fukky Fuk” bear. Everyone should be so lucky.