Here’s his bit on the American Dream: 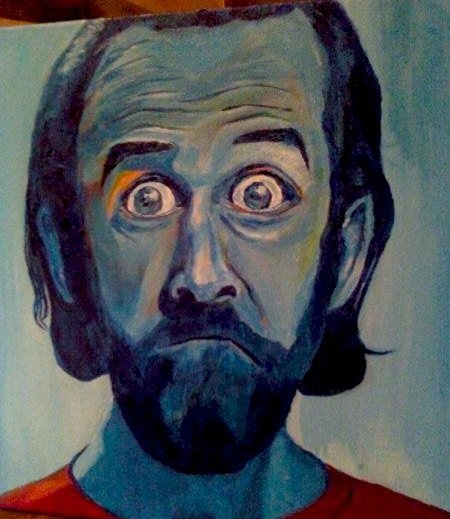 George Carlin was a genius, a legend and philosopher.

Carlin was born in 1937 and died in 2008 and he was, in my opinion, a man whose thinking was way ahead of his time. It seemed many people just weren’t ready for the explosive black humor he used in most of his sketches.

Carlin got thrown out of clubs, banned from appearing on TV shows and caused audience riots due to his criticism of society. He caused a sensation by constantly repeating “seven words you can never say on television” which led to a lawsuit resulting in the creation of the “family hour” network on television. Carlin’s intentions were not to shock, but rather to make us question our irrational fear of the words.

Don’t watch if you don’t want to hear the seven words that should never be spoken on television:

George Carlin on being individual.

“I don’t like ass kissers, flag wavers or team players. I like people who buck the system. Individualists. I often warn people: ‘Somewhere along the way, someone is going to tell you, ‘There is no “I” in team.’ What you should tell them is, ‘Maybe not. But there is an “I” in independence, individuality and integrity.’ Avoid teams at all cost. Keep your circle small. Never join a group that has a name. If they say, ‘We’re the So-and-Sos,’ take a walk. And if, somehow, you must join, if it’s unavoidable, such as a union or a trade association, go ahead and join. But don’t participate; it will be your death. And if they tell you you’re not a team player, congratulate them on being observant.

On society’s addiction to purchasing.

“Consumption. This is the new national pastime. Fuck baseball, it’s consumption, the only true, lasting American value that’s left…buying things…People spending money they don’t have on things they don’t need…So they can max out their credit cards and spend the rest of their lives paying 18 percent interest on something that cost $12.50. And they didn’t like it when they got it home anyway. Not too bright, folks, not too fuckin’ bright.”

Carlin’s take on the government.

“Forget the politicians. The politicians are put there to give you the idea that you have freedom of choice…you don’t. You have no choice. You have owners. They own you. They own everything. They own all the important land. They own, and control the corporations. They’ve long since bought, and paid for the Senate, the Congress, the state houses, the city halls, they got the judges in their back pockets and they own all the big media companies, so they control just about all of the news and information you get to hear. They got you by the balls.

They don’t want people who are smart enough to sit around a kitchen table and think about how badly they’re getting fucked by a system that threw them overboard 30 fuckin’ years ago. They don’t want that. You know what they want? They want obedient workers…Obedient workers, people who are just smart enough to run the machines and do the paperwork. And just dumb enough to passively accept all these increasingly shittier jobs with the lower pay, the longer hours, the reduced benefits, the end of overtime and vanishing pension that disappears the minute you go to collect it, and now they’re coming for your Social Security money. They want your fuckin’ retirement money.

They want it back so they can give it to their criminal friends on Wall Street, and you know something? They’ll get it…they’ll get it all from you sooner or later cause they own this fuckin’ place. It’s a big club and you ain’t in it. You and I are not in The big club. By the way, it’s the same big club they use to beat you over the head with all day long when they tell you what to believe. All day long beating you over the head with their media telling you what to believe, what to think and what to buy. The table has tilted folks. The game is rigged and nobody seems to notice. Nobody seems to care. Good honest hard-working people…white collar, blue collar it doesn’t matter what color shirt you have on.

“I’m a modern man, a man for the millennium. Digital and smoke free. A diversified multi-cultural, post-modern deconstruction that is anatomically and ecologically incorrect. I’ve been up linked and downloaded, I’ve been inputted and outsourced, I know the upside of downsizing, I know the downside of upgrading. I’m a high-tech low-life. A cutting edge, state-of-the-art bi-coastal multi-tasker and I can give you a gigabyte in a nanosecond!

I’m new wave, but I’m old school and my inner child is outward bound. I’m a hot-wired, heat seeking, warm-hearted cool customer, voice activated and bio-degradable. I interface with my database, my database is in cyberspace, so I’m interactive, I’m hyperactive and from time to time I’m radioactive.

Behind the eight ball, ahead of the curve, ridin the wave, dodgin the bullet and pushin the envelope. I’m on-point, on-task, on-message and off drugs. I’ve got no need for coke and speed. I’ve got no urge to binge and purge. I’m in-the-moment, on-the-edge, over-the-top and under-the-radar. A high-concept, low-profile, medium-range ballistic missionary. A street-wise smart bomb. A top-gun bottom feeder. I wear power ties, I tell power lies, I take power naps and run victory laps. I’m a totally ongoing big-foot, slam-dunk, rainmaker with a pro-active outreach. A raging workaholic. A working rageaholic. Out of rehab and in denial!

But, I’m feeling, I’m caring, I’m healing, I’m sharing—a supportive, bonding, nurturing primary care-giver. My output is down, but my income is up. I took a short position on the long bond and my revenue stream has its own cash-flow. I read junk mail, I eat junk food, I buy junk bonds and I watch trash sports! I’m gender specific, capital intensive, user-friendly and lactose intolerant.

I bought a microwave at a mini-mall; I bought a mini-van at a mega-store. I eat fast-food in the slow lane. I’m toll-free, bite-sized, ready-to-wear and I come in all sizes. A fully-equipped, factory-authorized, hospital-tested, clinically-proven, scientifically- formulated medical miracle. I’ve been pre-wash, pre-cooked, pre-heated, pre-screened, pre-approved, pre-packaged, post-dated, freeze-dried, double-wrapped, vacuum-packed and, I have an unlimited broadband capacity.

I’m a rude dude, but I’m the real deal. Lean and mean! Cocked, locked and ready-to-rock. Rough, tough and hard to bluff. I take it slow, I go with the flow, I ride with the tide. I’ve got glide in my stride. Drivin and movin, sailin and spinin, jiving and groovin, wailin and winnin. I don’t snooze, so I don’t lose. I keep the pedal to the metal and the rubber on the road. I party hearty and lunch time is crunch time. I’m hangin in, there ain’t no doubt and I’m hangin tough, over and out!”

And my all time favourite:

“Never argue with an idiot. They will only bring you down to their level and beat you with experience.”