The Masks we Wear in Crowded Places. 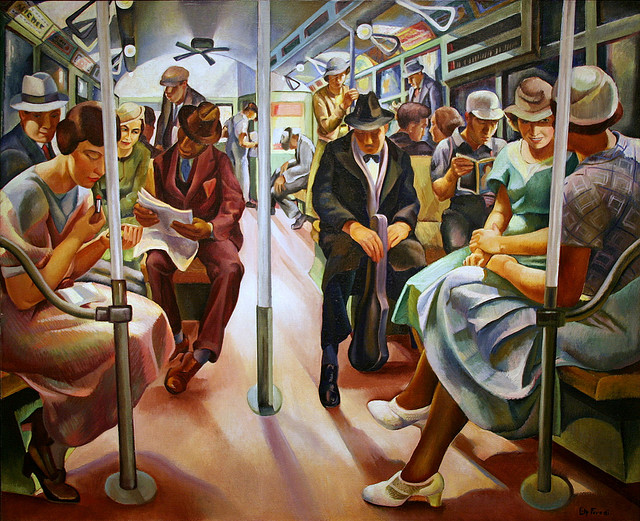 I watch the little girl watch me.

Occasionally her eyes flick to either side, as if to relieve me of her surveillance.

I don’t mind, though.

She has the most stunning face. One of those faces that makes no apologies for peering into your soul. Her almond eyes against the backdrop of toffee skin, a vision.

I spend the stretch of 125th to 59th street guessing her age; four years old, maybe? As wise as she seems, her innocence shines through in her chunky little legs that resemble a doll’s, each foot turned out in perfect first position.Same train. Different day.

I settle in to the not-really-private-but-somehow-private front-facing window seat and marvel at the invention of the subway.

I am aware of the strangers sitting adjacent to me, staring at my profile. It seems everyone stares on the subway yet nobody wants to be seen staring. We look down at our phones or books or newspapers or nothing at all to avoid being noticed.

Or we look out smudgy windows and feel an intimacy that is only prevalent in a setting so public as the New York City Subway.Sometimes people move places to reinvent themselves. The subway moves bodies for finite amounts of time and allows individuals to become strangers in the midst of their complicated lives.

No amount of makeup could have hidden the grief on my face in the weeks following a particularly difficult breakup. The subway, though—it was a godsend. For 35 or 15 or 60 minutes I did not have to speak to anyone.

The fluid motion of the train car rocking me to and fro reminded me of my mother rocking me as a child. I didn’t have her neck to nuzzle into, the sweet smell of rose on warm skin but I had a capsule that removed me from one place and brought me to another.

The simplicity of this realization provided a comfort I didn’t know I yearned for; I could leave the subway whenever I wanted to, but it would never leave me.On any given day, I imagine all of the stories that are intersecting with each other in a single cable car.

Doctors, homeless people, sanitation workers, lawyers, the unemployed, the over-worked, the boy who has just lost his mother to cancer.

He hides behind his headphones and baggy clothing but his heart hurts. It hurts more than it ever has.

The husband who fingers his wedding band with a twinge of guilt but not enough to make him stop having the affair—it lets him feel like a teenager again. He wonders how doing something that makes him feel so alive could really be a bad thing. He wonders if he loves his lover or just wants to. He wonders if he still loves his wife.The recent college grad who just received the job of a lifetime and she can’t hide her smile even though she realizes it appears as though she is smiling at nothing and this makes her seem slightly crazy but really—who gives a f*ck?

The pubescent, acne-ridden couple in the corner kissing each other’s eager mouths and thinking that they will be together for their entire lives. They each wonder if the other feels this way too but for now relish in how sweet his/her spit tastes.

The many sad faces of strangers experiencing heartbreak at the same time. If only we could reach out and touch each other, uniting in our struggle.The elated smirk painted on the lips of the twenty-something listening to some song that makes his foot tap in four/four. He’s returning from the most amazing night with a guy who is now not a stranger, whom he only met the night before. His mind keeps flashing images of the two of them naked together, coming together. Whispering admonitions they have only told each other, because sometimes revealing life’s truths to someone who knows nothing about you is the safest feeling in the whole world.The classy woman in her seventies who sits demurely cross-legged and reads her kindle. She wears a cashmere turtleneck and black-rimmed glasses. Her white hair is swept effortlessly to one side and it is only when you look at her hands, decorated in vintage rings, that you wonder about all of the life she has witnessed.

Friends and family who have already passed, trends she has seen come and go, wisdom contained in the purse of her perfectly painted red lips. You admire her elegant wrinkles. You want to reach out and touch them; your finger tracing what you imagine is the softest, most delicate skin. Like that of a baby but with years of experience.

You compare birth and life with aging and death and the parallels in babies and the elderly are uncanny. You wonder if she is happy. You wonder if it matters. In that moment, her eyes look up at you and you quickly flit yours away, leaving only the faintest trail of a smile on your now neutral mouth.I wish people would stop wearing masks all the time and just live as who they truly are.And yet I am grateful for the places that allow us to wear our masks freely and openly.

I once witnessed a woman working so hard to keep the tears in her eyes from falling. Despite her valiant efforts, it happened. I watched in awe and sympathy as it pooled up in the corner and dribbled down her resilient face.

The purity of the moment was beautiful.

I felt its hot saltiness, the sticky residue it left on her cheek.

I wanted to tell her that I, too, had experienced that raw emotion before. That we all do. That it was okay. That she would be okay.

Instead, I quietly looked away. I fixed my eyes on the horizon of the subway and let them dart into the abyss of the approaching tunnel.