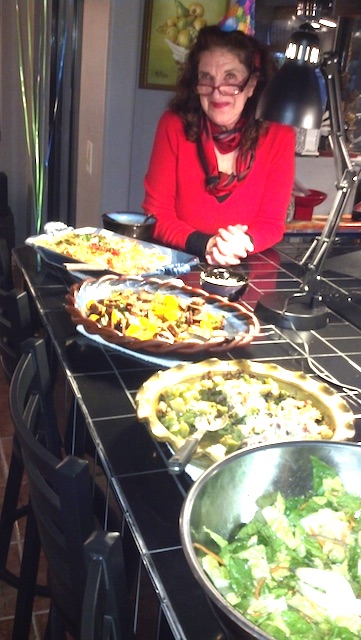 My mother was born in Italy.

She didn’t use recipes when she cooked and she taught me by the “stand over there and watch” school of cooking.

She made a really unusual pasta e fagioli that was one of my favorites.

Here is her method of preparing it, including her pre-cooking ritual (which I sometimes adhere to more strictly than even the cooking).

The first thing you do when making this pasta—or any other pasta—is to put on an apron. Wearing an apron when cooking is the right way to dress for the occasion and my mother said every Italian always dresses right for the occasion.

Next, get a bottle of wine from the top shelf of the cupboard and pour a glass. Any wine will do, so long as there’s enough to last until the cooking is done. Then, go into the living room and put Frank Sinatra on. Blast it loud enough to be able to hear it in the kitchen and when Sinatra comes to “I Did it My Way” sing along with him at the top of your lungs.

Pour about a quarter inch of olive oil into the bottom of a large saucepan. Use the olive oil that comes in the big square can imported from Italy that’s under the sink and has a few dead gnats stuck to the top of it.

Smash some garlic with the side of a large, flat knife.

Make a loud noise so everybody knows the cooking has started and they should stay out of the kitchen and not bother you while you have a knife in your hands.

Get the oil hot and cook the garlic in it until it’s a nutty golden brown.

How do you know if you put in enough garlic? Put your head down over the pot and smell. If it smells like the perfect combination of garlic and oil you smelled when you were little and your grandmother cooked it on the old black stove in South Philly, then leave it alone. If it smells like something your American neighbors next door learned from the Cooking Channel, add more garlic.

If you’re not sure, add more garlic anyway. Remember the motto, “When in doubt, add garlic.”

Throw some crushed red pepper into the pot with the garlic.

Fill the huge pasta pot with the loose handle with water to boil the pasta in and turn on the heat.

Open a can of cannellini beans and empty the entire contents into the pot with the olive oil, garlic and crushed red pepper.

Next, add half a cup of the chicken broth, saved from the last time you made homemade chicken soup, to the pot with the beans in it and stir everything together.

What the hell, pour some wine in the pot with the beans too.

Coarsely chop a head of cabbage and then hold the chopped cabbage between our hands under a running faucet. Add the dripping wet cabbage to the pot with the garlic, beans and red pepper. Put the lid on and turn down the heat. Don’t stir.  Let the steam from the beans and the broth cook the cabbage.

By now, the water for the pasta should be up to a rolling boil so dump about a pound of farfalle pasta or penne pasta into the boiling water (definitely do not use elbow macaroni, that’s what Sicilian’s use) and stir it with the God-forbid-something-should-happen-to-it wooden fork that your grandmother brought over on the boat with her all the way from Italy—may she rest in peace.

After nine minutes exactly, call your husband to come in and taste the pasta before it gets past al dente (bite to the teeth) and turns e scotti (mushy) which everybody knows can happen in the blink of an eye unless he gets in here right this minute.

Get two oven mitts out of the drawer next to the oven. Don’t get the burned one with the hole in it, you’ll be sorry.

Put the colander in the sink. Use the old aluminum colander with a dent in the side, the one that every time you use it someone says aluminum gives people Alzheimer’s.

Then, with the mitts on, pick up the pot with the pasta and the boiling water in it. At the same time begin shouting at the top of your lungs, “Keep back! I’m gonna throw the pasta!”

This is so if there are any people in the house they will not under any circumstances whatsoever come into the kitchen when you are throwing the pasta and end up with you accidentally throwing it on them, boiling water and all, like, hand to God, happens in Italy all the time.

Be sure to dump the pasta into the side of the sink that has the colander in it, not the other side.

After throwing the pasta, let it sit in the colander long enough for the steam to clear off your glasses and then dump it into the large, pasta bowl with the cracks in the glaze that’s stamped “Made in Italy” on the bottom and that your kids gave you for Mother’s Day when they were little.

Do not rinse the pasta. No matter what anybody says, it doesn’t need it.

Next, add the entire contents of the pot with the beans and the cabbage to the pasta and toss it all together.

If it’s not Christmas Eve or a Friday and you’re not a vegan or some other weird thing, you can have meat; so slice prosciutto into thin strips and add it to the pasta. Instead of prosciutto you can use anchovies—unless they gross you out.

Sprinkle the whole thing with grated asiago cheese and garnish with parsley.

Spread a tablecloth on the table and put candles, wine, and some mineral water imported from Italy on it along with Italian bread and fresh tomato salad with basilica.

During dinner, make sure everybody has more food on their plates than they can possibly eat and let them all talk real loud about how good it is, whether it was better last time or the way your grandmother made it and how even the Pope isn’t eating so good tonight.

Finally, after you’ve passed the pasta bowl around two more times and you’re sure nobody can possibly eat another bite, if there are people at the table who aren’t Italian and who ask you for the recipe—tell them to come by the next time you make it.

By the way (depending on how much wine you drink) this recipe takes 20 minutes to cook and it feeds four adults. I have used gluten free penne pasta in it very successfully (I happen to be one of those vegan/gluten-free weirdos).