Building a Relationship with the Land. Born and bred in London, I’m a city girl through and through.

But there is something fundamentally missing from city life that I believe is absolutely vital to our continued existence on this planet; a meaningful relationship with the land.

However, when the ground is covered in cement and buildings nobody asks, “What relationship do I have to this land?” I don’t think anyone even notices the land at all, except when struggling up a hill with their shopping.

A relationship with the land is vital, however, because without it we are going to continue to consume and abuse the very environmental systems that support us and we may kill ourselves off completely.

Recently I got the opportunity to do an Integral Permaculture internship at an eco-village in Spain.

What a strange and alien concept to a city girl like me. However, it gave me the chance to go on a quest and find out what a relationship to the land really means.

Before we begin let’s look at some history.

For about 3,000,000 years our ancestors lived in a balanced relationship with nature.

We would take what we needed and leave the rest, for all the other types of life, accepting that sometime there would be bountiful abundance and sometimes we’d have to go without. If the hunter gather cultures we know of give us any ideas, we respected and revere the spirits of all living things and saw ourselves as belonging to the earth—instead of it belonging to us.

This worked pretty well until about 10,000 years ago, when we invented agriculture and were forced by circumstance to no longer see nature as abundant.

Instead, we began to see it as an enemy who came and killed our crops or stole our chickens. And what’s more, we decided that we were more intelligent than the planet and we should start running the show ourselves.

Fast forward to today and on the surface we’ve done pretty well. We can genetically modify our food to make it more resilient, keep thousands of chickens in giant barns away from other animals and use artificial fertilisers, stimulating abundant growth whenever we want.

So why do we all have this sneaky feeling, along with all that evidence, that something is going terribly wrong?

We need to face facts. Industrial civilization has severed our relationship with the land.

We have achieved many things in the process, but now it’s time to re-establish our relationship with the land in the way that indigenous tribes have been pleading us to do for centuries.

Each individual’s journey will be personal to them. I don’t think it can be explained in a 10 point list of “Things To-Do.” We need to get to know the land in our own way.

However, here are some things that have helped me over the last few weeks that might help you to.

When we walk barefoot we are in immediate connection with the land. It’s not such a good idea in a city but in a muddy field or a grassy meadow our feet pick up all kinds of information about the land that we only have a vague idea about when walking in shoes.

One on the key practices in permaculture is observing.

What is growing where? Who is already living here? Which birds? Lizards? Insects? Plants? Humans?  When I sat and observed I could see how this intricate dance of life played out in perfect synchronicity and where I fitted in.

Sometimes I talk to trees.

Yes I know, it’s a cliché, however the responses I “imagine” are always insightful, informative and sometimes in an uncanny way.  Indigenous people have use intuition and “imagination” to directly communicate with living things for millions of years.  When you want to know if the land wants you there then ask it.

If we imagine it telling you to bugger off, then listen and bugger off. (This is something we can do in a city, although perhaps not out loud.)

Sometimes I notice that we humans think we are a parasite on this planet.

But I don’t think that’s true. We grew from this planet and I think we have the ability to live in balance with all the other creatures in a cooperative and respectful way, like we did for millions of years.

It’s only recently (10,000 years) that we thought we’d have a go at taking control of our lives and the environment. It’s been fun, but it doesn’t work and we need to use this amazing consciousness we have to remember how we used to live with the land all those years ago.

I wonder if the land misses us? 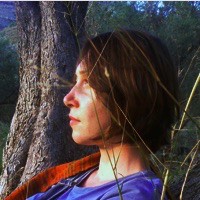