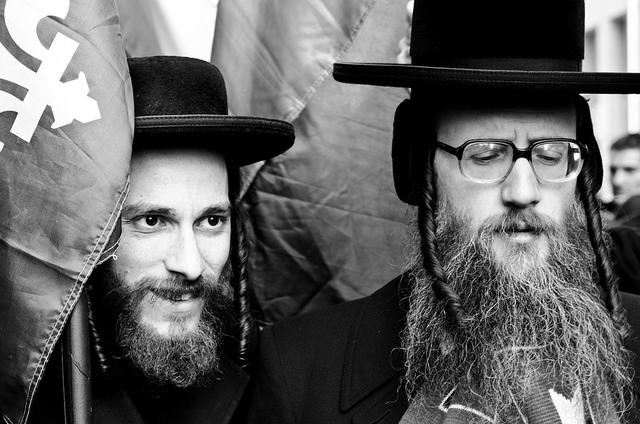 The number one most ignored news story this year is the reappearance of genocide.

And as was the case with every genocide of the twentieth century, we refuse to look the monster dead in the eye:

The Syrian siege, starvation and bombardment of cities looks like genocide.

The ISIS videos of hundreds of terrified young Iraqis being carried in the backs of trucks, laid down like logs, and systematically shot in the head looks like genocide.

The recent ethnic cleansing of Muslims from the Central African Republic, coupled with Hutu-style machete mob murders and occasional acts of cannibalism, similarly looks like genocide.

And then, of course, there is Gaza.

The capacity to commit genocide might be best framed as a social disease that spreads from group to group and is passed from one generation to the next. The Germans who forced Herero natives into the desert of Namibia in 1904, and over the course of the next three years sought to exterminate them all in the first genocide of the twenty-first century, later passed their disease onto others. It is quite likely the advisors they sent to Turkey, who oversaw their genocide of Armenians, had some role in the Herero genocide. And somehow, the disease reappeared in the Nazis two generations later.

Genocide is passed not only from perpetrator to perpetrator; it can also be passed onto observers who fear for their own safety. Genocides also tend to spread in times of war, when there is carnage all around and more can slip through the radar.

But it is also passed onto the victims of genocide. And this is the double crime of genocide, like a rapist passing HIV to his victim. The Hutu were themselves the victim of a partial genocide by Tutsis in Burundi in 1973. After suffering genocide at the hands of Hutu in 1994, the Tutsi victims carried out mass atrocities against the Hutu and other groups in the Congo in the late nineties.

Genocides can kill indiscriminately, for it is difficult to channel the drive to mass murder. Rather, genocide tends to take in everything within its purview. So when the Rwandan Tutsis followed Hutu into the Congo in the late nineties, destabilizing the region and drawing in nine other African states, we saw an anarchy much like the European Thirty Years War. Because genocides are indiscriminate, they spread panic. They stimulate the imagination of observers. And they set in motion cycles of revenge killings that can become increasingly intense, difficult to control, and similarly indiscriminate.

The collective trauma from this killing is then burnished in the mind of victims. It becomes a template for how the world works. The roles of victim, perpetrator and observer vacillate. Suffering a genocide predisposes one to later inflicting genocide. Victims-turned-perpetrators live under the constant threat of annihilation, seek to avenge those who killed their families and guard against others who might do the same as the memory of past hurt has become emblazoned into their sense of national identity. Thus, the Palestinians appear like Nazis to the Israelis, as Israelis play perpetrator in a transgenerational drama that seems to never end.

To equate a people living under this perpetual boot heal of terror with the perpetrators who passed the disease of genocidal tendencies onto them can be like calling a rape victim by the name of her rapist. Nothing could be more insulting than to call an Israeli a Nazi, for they are not responsible for whatever the Nazis passed on to them.

But it is a disease that spreads, and it must be diagnosed. For genocides do not only damage the victims but also the perpetrators whose power imminently crumbles, like the Hutu who lost power after a mere three months of slaughtering victims by day and getting drunk and looting by night.

When the Israel Defense Force organized and stood guard over the systematic slaughter of about a thousand Palestinians in the Sabra and Shatila refugee camps in 1982, the idea that Israel might be capable of genocide entered Israeli national consciousness. Almost immediately, its Prime Minister and Minister of Defense were ousted by a peace movement that fast swept the country.

But as we observe the crowds gathering on the border of Gaza cheering on each strike, the politicians speaking of killing Palestinian women so they bear no more snakes, the young men chanting that there are no more schools in Gaza because all of the children have been killed, and the largely defenseless Gazans fighting a nuclear armed state after suffering a near decade siege with nowhere to run, many have begun to assert that the disease of genocide has appeared amongst Israelis.

While Hamas could not begin to carry out anything approaching a genocide against a fully developed state for generations, and while they would almost certainly fall from power before that time might arise, they speak the language of genocide and this sets off alarms for Israelis. Meanwhile, Israelis see genocide breaking out all around them, and it has been easy for them to see in ISIS and Assad some future face of Hamas.

To call Israelis Nazis is insulting and ignores the historically rare brutality of the Holocaust. To whatever extent some Israelis may have adopted some of the habits of the Nazis, this is a tragedy deserving of our empathy. Without this empathy and understanding, the disease could grow worse since it feeds on isolation and fear. And yet, to ignore this root disease is to condemn Palestinians and Israelis alike to destruction; Genocides, however small, have a way of tearing apart the social fabric of every group they touch.

We must learn to see the Israelis themselves as victims of the crimes they are now committing: we must learn to look these pervasive genocides dead in the eye so that, through our awareness, they might be stopped dead in their tracks.