The Dogs who Failed to Bark: How Israel is Framed. A classic Sherlock Holmes story tells of a winning race horse that is taken in the night and its owner killed.

Sometimes it is the dogs who do not bark that are the real story.

When the watchdog press repeatedly fails to bark on a major issue, we would do well to ask why. The conservative Israeli Sharon administration releases a report stating a third of all settlement lands have been stolen from private Palestinian deed holders. UNICEF releases a report condemning Israel for kidnapping Palestinian children in the night and beating them in an effort to make them into informers. Human Rights Watch releases a report stating Hamas is not actually using human shields and thus the Israeli bombardment of dozens of schools and hospitals in Gaza is not only ethically controversial but gratuitous.

And all the while, the watchdog press remains silent.

It is enough to make one ask what tail is wagging these quiet dogs. But while supporters of Israel are well positioned to censor the truth about the occupation, and while many journalists, including this one, have tales to tell of their work on Israel being inappropriately suppressed, it may be the case that the dogs have simply had their attention diverted. The language through which Israel’s actions are framed may be the real story of the dogs who didn’t bark.

Language shapes experience, it directs our attention, and tells us what is important. According to the cognitive scientist, George Lakoff, our ideas of the world are built up through cognitive frames. Frames shape perception through subtle metaphors concerning the way the world is ordered.

When development is conceived of through the metaphor “higher,” and “higher” is equated with “better,” this is not an ethical argument but rather a set of frames. It allows a person to jump from the argument that something is “more developed” to the argument that it is “more moral” without actually making a moral argument.

This is dangerous because more developed states are not always more moral. But this is precisely what supporters of Israel often suggest, forgetting their own tragic history with a pathologically developed Germany.

There are other frames shaping our perceptions on this issue we would all do well to acknowledge.

News sources tend to speak of a Middle East “conflict.” But the word “conflict” is a frame that has several consequences for how we conceive of the situation. There must be at least two sides to every conflict. But if there are two sides, then each side deserves to be heard and each side must take responsibility for perpetuating the conflict. Where there is conflict, fair minded people listen and tell both sides, because when both sides are heard conflicts can be resolved and this leads to peace.

But the occupation of Palestinian Territories is arguably more like a case of theft. 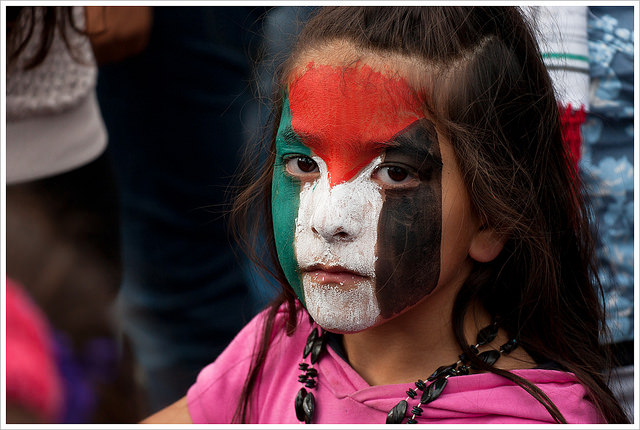 Israeli courts have long recognized it to be an occupation, and the occupation involves the theft of Palestinian groundwater and the theft of privately owned Palestinian land, which is being colonized with Israeli settlements. While thefts also involve conflicts we do not tend to frame them as such. For doing so puts the thief on an equal footing with his victim. And this fails to capture the essence of what is important about theft.

What is important in a case of theft is not peace but rather restitution. If the family of a thief were to begin speaking of the “conflict” with his victim, we would recognize at once that something is amiss, that our perception of the situation is being manipulated. Framing thefts as conflicts makes them more likely to occur in the future, and this can only benefit the thieves.

Similarly, the occupation is inherently abusive, as military occupations tend to be. Among other things, it involves arresting children, killing protesters and invasive check points, as most occupations do. While cases of abuse are also conflicts, we do not tend to frame them as such. For framing abuse as conflict favors the abuser.

A woman may struggle against her rapist but we do not tend to call this conflict. The Solidarity movement may have struggled against the Soviet Union in 1989, but we did not tend to call it a conflict for good reason. Not only were the two sides not equal, one side was struggling against an oppressor. To have framed it as a case of conflict would have suggested a sort of moral equality between the two sides.

There is a conflict between Israelis and Palestinians, but it is a conflict that is perpetuated not through a failure to understand the other side but rather through theft and abuse. The failure to highlight this abuse distorts the nature of the relationship in the minds of onlookers.

Giving equal weight to lies simply means drifting further from the truth. And there are not two sides to be heard but rather many. Hearing them all is not balance but comprehensiveness, and comprehensiveness requires deeper understanding. But what is essential is often just the thing that one side does not want to see.

Confucius was once asked what he would do if he were to rule China.

He answered that he would begin by calling things by their true names.

When things are called by their true names, the dogs will bark when criminals approach. But up to now, our attention has been largely diverted. It is time we take it upon ourselves to frame Israel—and that is a pun. We need to catch them at the scene of the crime and call their crimes by their true names.