Don’t let Anything Stand in the Way of Your Dreams. 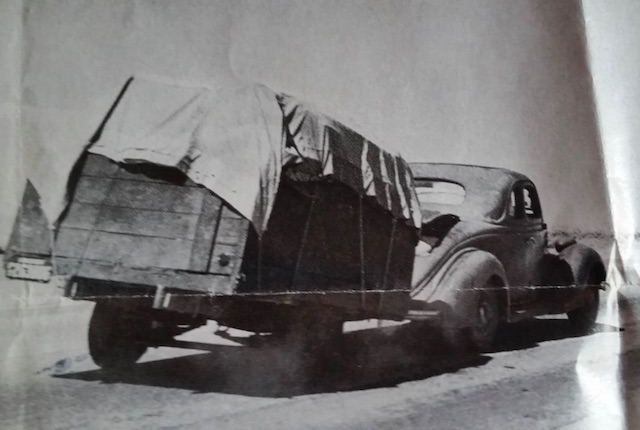 “Why would anyone plant an avocado tree right there,” my mother would say whenever she ducked under it to simply get into the house.

I knew she didn’t mind though. She loved it because she said we couldn’t get avocados right off the tree in Philadelphia.  We had to go to the American grocery store to buy them.

In California, there they were, right on the tree, outside the front door.

She’d cut avocados in half and send them to school in our lunches with salt and a spoon. Or mash them onto saltine crackers and drizzle them with olive oil and garlic or put them sliced inside salami sandwiches.

My mother would tell us avocados were fresh and abundant, just like our new life in California was going to be.

She always claimed that in California all we had to do was spit in the dirt and something would grow. To prove her point, she’d poke a hole in the ground with her finger, stick in a piece of cut off geranium and it would grow.

“Paradise.” That’s where my father had said we were going, to paradise, with palm trees and blue oceans and grapefruits the size of our heads with sunshine, bungalows and big back yards—paradise.

My father, Salvatore, would become Ed, the name they’d given him in the Navy. My mother, Clara, would become Claire. As for my name, I was baptized Carmelene and would be called by my middle name, Melanie. They didn’t change my sister Loretta’s name, but my dad said that was okay, Loretta sounded Mexican and Mexicans were here before us so that made them Americans.

No more dark, narrow streets, with only small slits of sky and cars parked on the sidewalks and fathers who were plumbers or bricklayers or tailors. No more women leaning out the windows talking to each other in Italian. No more sweeping the stoop every morning with buckets of water and a broom. No more horse-drawn vegetable wagons, or horse-drawn ice and coal wagons, or even horse-drawn merry-go-rounds.

No more horse-drawn anything.

It was California here we come, and sun-kissed maids saying don’t be late, and the Don Martin School of Radio Arts and my mother’s sewing label that didn’t just read Claire, but “Claire of California.”

We were leaving Philadelphia for a new land and a new life.

I stood by the curb that early morning watching my father pack up the car.

“Look at that De Soto, Clara. It looks like it was made to go to California.”

The furniture had been taken away the day before but my mother insisted that he not sell the kitchenware. “It’s coming with us,” she announced. Then they said some pretty loud things to each other in Italian, but my mother won and I stood there and watched as my father tried to fit it all into the car.

Every now and then my mother would call me into the house and hand me yet another box or bag and tell me to take it out to my dad. The car looked completely full to me. Dad had filled the glove box, the spaces under the front seats and the package tray behind the rear seat. He even filled up the floor in the back and laid blankets all over the mess to even it out.

“You and your sister can play there,” he said as I frowned at the crowded, lumpy space he was pointing to.

I’d been watching my father pack all morning. He would take each item, hold it in his hands, turn it over, look at it for size and shape, move a few things and then slip whatever he had in his hands into a tiny space that didn’t look like it could hold one more thing. He had a proud look on his face like he was accomplishing something nobody thought he could do.

Finally, he put his hand on top of the open trunk lid, and with a big satisfied grin told me to go and tell my mother that he had gotten it all in.

When I looked inside the house it was completely empty. My mother was sweeping the kitchen floor.

“Daddy says to tell you he got it all in.”

My mother turned around behind her and handed me something. “Here, give this to your father. It’s the last thing.”

It was a big bag of potato chips. Where was he gonna put it? Maybe he’d throw it on the back seat where my sister and I were supposed to play.

“Here, Daddy. Mother told me this is the last thing.”

He was still standing by the trunk, his hand on the open trunk lid.

“This could be a problem, Melanie,” he said.

He carefully laid the flattened bag of potato chips on top of the stuff in the trunk.

“That’s the nice thing about potato chips,” he said. “They fit anywhere.”

I have never forgotten watching my dad that morning. Watching how he measured everything that had to go in the car with his eyes, how excited he was and how he wasn’t gonna’ let anything get in the way of his dream—his California dream, even the bag-of-potato-chips-monkey-wrench my mother had thrown in the way.

That morning, with his attitude and actions my father taught me how to approach the problems that show up in life.

Just take each one as it comes, turn it over, look at it for its size and shape, move a few things and then slip it into the space that it fit into. His simple words became the motto of my life and taught me that there is a way around every obstacle.

Even when life throws a monkey wrench into my plans all I have to do is remember my father standing at the rear of the car with his hand on the trunk lid.

Six Obstacles that keep us from Being Present.