How I Learned the Difference between Catholic & Buddhist Orgasms. 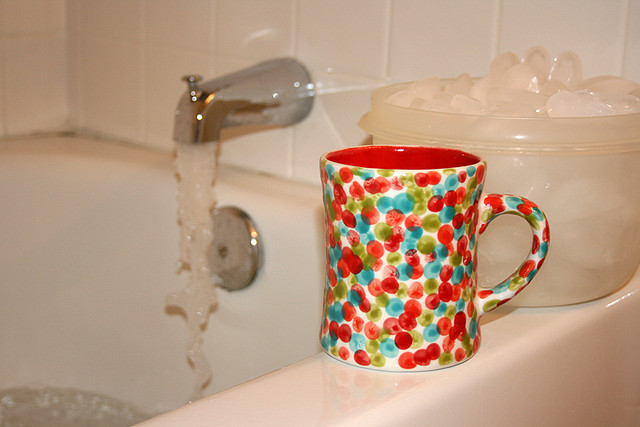 I was raised Catholic and went to Catholic schools from first grade 12th. As a young child, the Catholic religion mostly terrorized me with stories about burning in purgatory, babies in limbo and the sick, depraved nature of pleasure.

I had read the life story of St. Rose of Lima, an ascetic, self-flagellating, anorexic, stigmata-enhanced saint of the Catholic Church—today they’d put her in a support group or give her Prozac. I became convinced that if I could model myself after her, I too, would be good and maybe even become a saint.

At the very least I could be saved from burning in hell or from the wrath of a God who kept score—a score that I knew was already not in my favor. In desperation, to save myself from all of that, I decided to be like St. Rose.

St. Rose’s prayer life, which I didn’t understand, didn’t impress me all that much. I was however, particularly taken by her self-torture, so I decided to start with that.

The first thing I tried was St. Rose’s boiling bath water torture. I thought she had to be really holy to do that because it seemed like it would hurt—a lot. But apparently I wasn’t holy enough, because I couldn’t even get in past my toes.

Thinking that I just needed to change tortures to find the right one for me, the next thing I tried was St. Rose’s ice water bath torture.

I didn’t want my family to know what I was doing so I waited until one night when my mother and father had gone out for the evening.

First, I filled the tub with cold water, dumped some ice cubes in and then very, very slowly slid down into it. The icy cold water wasn’t exactly painful but at least I was able to get in past my toes.

As I continued to drop down into the water, I steeled myself in anticipation of the torture to come.

By the time I was almost fully submerged I noticed that instead of the icy water torturing me and purging my sins with pain the way it did for St. Rose, I began to have strange and wonderful contractions all over my body. And I do mean, all over my body—head to toe.

It definitely did not feel good to be in the ice water—but the contractions? Well, they were a whole other story.

This must mean I’m getting holy, I thought.

I decided the ice water bath tortures were for me and started taking them whenever I could.

Since things were going well in the getting holy department, I decided to try St. Rose’s rocks in the bed torture.

Actually, St. Rose didn’t sleep on a real bed; she slept on a bed made of nails. I couldn’t figure out how I would be able to make a bed out of nails, so I snuck rocks into my bedroom in my pockets and threw them under the covers.

When I got into bed on top of the randomly tossed handfuls of rocks they would hit my body in tender places. Sure enough, those same ice water bath torture feelings of blessed and holy muscle contractions would come over me.

No wonder she loved God. I must love God, too.

But then wasn’t torture and suffering supposed to hurt? When I did my ice bath water torture and my rocks-in-the-bed torture, it didn’t hurt.

At least it didn’t only hurt. It also felt good—very good.

I thought I had finally found a way to have (Catholic) pleasure in my life. Just throw in a little pain and there was no longer anything wrong with it. In fact, it was saintly.

Needless to say, as the years went by, I did away with the ice water baths and the rocks-in-the-bed parts of my life and just kept the blessed and holy muscle contractions parts.

Everything was going along just fine until about 50 years later when I was on a 10-day Buddhist meditation retreat.

I was about two days into the retreat when I started to have “muscle contractions” during my sittings. I could hardly believe myself.

Meditation was bringing on full body ice water baths and rocks-in-the-bed, head-to-toe orgasms like I hadn’t had since my good old St. Rose of Lima days.

I actually had to make an effort to keep from moaning.

Inside my head, I could hear my still essentially Catholic mind giving me that old, if it feels good, it must be bad mantra and, bewildered by what was happening, decided that I had to talk the phenomenon over with the Roshi during my private visit with him.

When my appointed time came, I went into the Roshi’s chambers and sat down cross-legged on the cushion on the floor facing him. He was in full regalia, sitting cross-legged on his own cushion with his eyes slightly closed.

He didn’t even look up when I entered the room.

How exactly was I going to tell him that I was coming during the sittings? Even saying the “O” word out loud to him seemed out of place.

It was with some trepidation that I managed to tell the Roshi what I was experiencing and it wasn’t until I finally mentioned the part about my mind saying to me, if it feels good, it must be bad, that he seemed to even acknowledge that I was there.

An ever so slight smile flickered across his face.

“You were raised Catholic?” he asked rhetorically.

“Yes. I was raised Catholic.”

Then, in a very deep, Roshi-like voice, as if about to make an important pronouncement he said,

That was it. He didn’t say anything else. He just repeated it.

He bowed. My session with him was over.

I left the room and headed back to my cushion.

Oddly enough, on my way there I noticed that I felt empowered by the Roshi’s words.

As if I had been let out of a cage of some kind.

With his simple sentence, he had relieved me of a weight I didn’t even know I was carrying. In fact, he had given me an even larger teaching. Using orgasms as a metaphor, he had pointed out to me the entire difference between the Catholic and Buddhist views of the world.

During my sittings for the rest of the retreat I continued to have if-it-feels-good-it-feels-good-sacred-and-holy full body contractions.

No guilt. No shame.