Stop cheating yourself and others: 3 Ways to beat your Inner Walter White. What character traits do many of us share with Walter White from the hit crime series Breaking Bad?

If you’ve watched the show, I’m guessing the answer would be a resounding none? Don’t be so dismissive.

For the uninitiated, here’s a quick snapshot of Walter White: He’s a mild mannered high school chemistry teacher (picture Ned Flanders) who is diagnosed with inoperable cancer. In an attempt to secure his family’s financial future he embarks on a life of crime beginning with a backyard crystal meth operation.

He develops a taste for success and swiftly sets up a car wash business to launder his dirty money. By the end of the series he’s poisoned children, bombed nursing homes and eventually become an all-conquering drug lord who wiped out the entire Mexican drug cartel (by himself). One could say his moral calculus took a sharp decline.

So what do we all have in common with Walter?

We all have a fudge factor: the ability to justify dishonesty, to bend the rules a little (or a lot in Walter’s case).

At the beginning of the series, I totally justified Walter’s actions, here was a poor, brilliant man with a death sentence and he just wanted to leave something for his wife and kids to afford the bills and college.

I was right there with him fudging it up—virtually cooking the crystal meth for him.

It’s the fudge factor that sabotages our best efforts to eat well, get fit and to be happy. We apply it, when we ignore the suspicious behaviour of the charismatic Lothario.

A while back, in an attempt to understand my own failings to commit to a plan of being super-duper fit, I discovered Dan Ariely, the author of The (Honest) Truth about Dishonesty. The book explores some of the surprising reasons we lie to each other, and to ourselves.

Ariely says that when we observe the actions of a cheater over a long duration, it becomes apparent that rampant cheating isn’t an inherit characteristic—it’s a learned behaviour developed over time. He says that the cheater doesn’t intentionally think that they’ll engage in all of these dishonest actions sequentially. Cheating behaviour is more likely to occur one event at a time, over a period of time.

Typically the cheater will rationalise one dishonest step and when they take this step, they become a slightly different person. Then they take another step, and another step. Then all of a sudden, they start to think very differently about dishonesty. Just like Walter White did.

So cheaters don’t always set out to be cheaters.

I can relate to this. I know that when I open the fridge door and see the remnants of last night’s dessert, I see the cost benefit scenario in very immediate terms: “I’ll have a spoonful and I’ll walk away.” I never intend for that one action to initiate a two-day sugar binge.

I never intend for things to go awry. But they do, time and time again. It’s pathological.

I guess there’s a little Walter White in all of us. Insider traders, cheating spouses, tax avoiders and drug dealers all inherit the same lack of insight. When these types of characters were interviewed from a prison cell, almost none of them had been able to see the long-term implications of their actions.

So how do we turn down the fudge factor? Here are three tips:

Much of human behaviour is unconsciously motivated by the need to meet emotional needs.

We all have needs for security, attention, status, meaning, excitement, love, self-esteem and so forth. Now think about times when you’ve binged; times when the eating frenzy “came out of nowhere.”

What was the drive behind the binge? Really think about this, you’ll surprise yourself.

2. Feel the power of going against the grain:

Most of us know what good nutritious food is and what isn’t. Just because we’re at a shopping mall eatery and everyone else is downing junk food faster than a builder’s response to a Saudi prince’s request for a quote, it doesn’t mean we have to.

You’ll gain the respect of yourself and others when you’re the anomaly.

3. Stop protecting a reputation no one cares about:

We have a tendency to overstate our good habits, whilst downplaying our demons. There’s no need to continuously broadcast that we drink green smoothies and eat quinoa. In today’s world where hearing out a sales pitch is an everyday occurrence, people are craving honesty, authenticity and a bit of self-deprecation.

Tell people about your flaws and watch the crowd gather around you. We’re often our own worst critic.

Staying true to our convictions is testing. I used to aim for 100 percent perfection. But that approach only produced adrenalin and chaos. I’d swing wildly from being supremely focused (and resentful) to being completely untamed.

Life as a freewheeling hedonist was easier, but I could never fully enjoy the moment because I knew better. These days I’m a proponent of the 80/20 rule. It’s sustainable.

The wonderful thing about character and integrity, is that they’re one of the few things in life that no one will ever be able to forcefully take away from you. Your choices are yours to make. Make the right ones today and earn your break tomorrow.

The Importance of Experiencing Difficult Emotions. 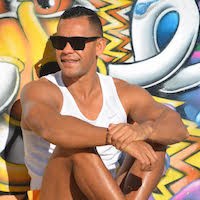