Sublimation & the Essence of Transformative Travel: My Journey to Taktsang. 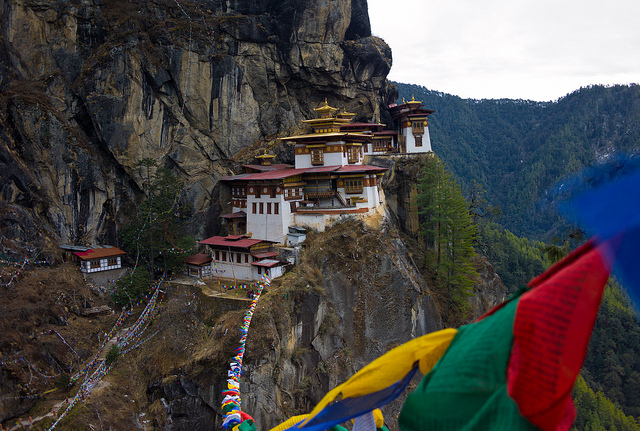 I was making my way steadily up the mountain to Bhutan’s most famous site: Tiger’s Nest monastery (also known as Taktsang).

The prayer flags thickened until I hit a whole wall of them.

My vision completely clouded with prayer, my choices were to either go under or find a way around. I did a half limbo until there it was—as if levitating on the side of a cliff, the monastery stood, both a marvel of technical prowess for the careful construction that went into it, and a marvel of human (and animal) effort for the work required to methodically bring the goods up the mountain to this remote location.

Sublime was the only word that came to a mind used to framing experiences in words. This particular word sounded appropriate since it is the root of sublimation. Sublimation is a term used in chemistry to denote a chemical change.

The link to alchemy is there.

We’re constantly changing, but it is by being aware of our changing nature that we find meaning. When we take the time to go on a contemplative trip we place ourselves in one occasion after another that lends itself to reflection, deepening with each experience and reaching further inward.

My guide, Tsering, led me through the monastery, one room after another, each more impressive than the first. I felt a deepening of contemplation coming from the repetition, which was further reinforced by day after day of this same kind of travel, this being the final climactic event of my week in Bhutan.

A number of statues in the monastery held an awe to them, but the one of Guru Rinpoche riding atop his tiger captured my attention.

Guru Rinpoche (or Padmasambhava) is credited with bringing the Vajrayana Buddhist teachings to Bhutan in the 8th century A.D. Legend has it that the former wife of an emperor, Yeshe Tsogyal, transformed into a tigress, which Rinpoche used to fly to Taktsang from Tibet. He defeated the demon Singye Samdrup then went into meditation retreat for three years, three months, three weeks, three days and three hours in the now infamous tiger lair cave.

I’ve always wondered why the passage of time mythologizes the stories of people like Padmasambhava. But the funny thing is that though these statues make their lives seem less real, being at the site where these people lived and did their work and seeing the devotion shown towards them makes them feel more real. And right now this statue claimed a powerful effect that my mind hadn’t quite comprehended, just felt. After staring at the statue for some time I sat down to meditate. I felt a lightness, a sense of tranquility that I didn’t feel in most places.

This place was special. It had a particular energy to it.

While in one of the temple rooms, Tsering lifted what looked like a trap door in the middle of the floor to reveal a barren rocky part of the cliff—the tiger lair cave where Padmasambhava meditated. No luxury accommodation needed for Rinpoche. When he meditated in these barren conditions it seemed he truly forgot about his self.

Sublimation is a process that comes more than anything from effort. Someone could have a near-death experience and have an intense awakening, but without putting effort into understanding the context of that experience, the initial thrill of the experience wears away. The same can be said for any epiphany or realization. Just as a space shuttle launches through the atmosphere the rockets fall back down to Earth and the shuttle soars through space.

We want to be the shuttle, not the rockets.

Thinking of masters like Padmasambhava—the man committed himself to an austere life of meditation over who knows how many lifetimes. When he reincarnated as Padmasambhava he was ripe for realization. When I stood at the site where this man lived and worked, the force of this man’s effort became apparent to me. He wasn’t messing around with his life. He was committed to what he thought was the ultimate way to live, and he did it. His effort was so sublime that he opened up Buddhism to new lands, spurring so many to take the path of sublimation.

Travel can reinforce what we already know, but in a powerfully transformative way. We know the importance of daily practice, whether it’s meditation or figure skating, but being in a place where so much effort has been made we can actually feel the legacy left by the master. By feeling the effort they have made (and the many who labored out of a strong devotion to build such an impressive monastery) it helps drive our own effort forward because it makes real the seemingly distant possibility of enlightenment.

Photos: 51 Places to Visit Before Dying.

Bhutan: Pilgrimage to the Last Buddhist Kingdom, via Frank Berliner