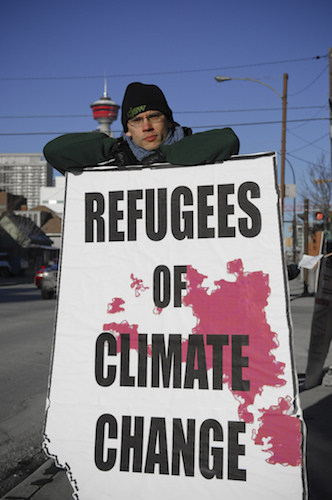 It is common to speak of human lack of preparedness for climate change.

According to NASA and the National Oceanic and Atmospheric Administration, last year was the warmest year on record and there is little reason to believe global temperatures will cease to rise for some time to come.

But we are also unprepared for climate change internally and there has been far less attention here. My own book, Convergence: The Globalization of Mind, focuses on how we must improve our ability to thinking globally if we are to halt global warming and other threats like nuclear proliferation. When most of us think of global threats we become overwhelmed, for global systems are unusually complex and difficult to grasp. Feelings of helplessness tend to make us shut down in paralysis. Imagining others to do the same, we tend to jump to apocalyptic scenarios, which only deepens the sense of helplessness. But we simply cannot address climate change without this ability to think globally.

Comprehending global harms like climate change calls not only for global but also statistical thinking. The harms must be measured; otherwise our predictions will be profoundly amiss. But as the Nobel Laureate Daniel Kahneman notes, most people are incapable of thinking statistically, so most of us have a hard time thinking rationally about climate change. If only our measurements yielded concrete numbers it might be easier. But greenhouse gases are emitted from the oceans, the forests, the human built world, ourselves—for all practical purposes, everywhere.

The measurements we use for emissions are based on predictions about the future behavior of every member of the human species, so these measurements must come in probabilities. And little can make a problem more abstract and subject to psychological distortion than talking about it in terms of probabilities. Climate change all too often leaves us in a quandary.

The inability to think clearly about these sorts of issues compounds a deeper, more ethical challenge set forth by the philosopher, Stephen Garner. Climate change challenges us to stretch our moral imaginations in ways humanity has never before attempted. Carbon dioxide emissions are released through every day actions—the things we eat, the way we get around, the places we inhabit. The emissions are invisible and intangible, and once they enter the atmosphere, they quickly disperse round the world and remain there for sometimes thousands of years. Hence, our most everyday actions harm distant peoples, future generations, and all life on earth.

Gardner calls this “a perfect moral storm.” While moral philosophers have been thinking about duties to family, community, and nation for thousands of years, they have only just begun to think seriously about duties to future generations, distant peoples and other species.

Adam Smith highlighted this challenge in a thought experiment in his Theory of Moral Sentiments, over 250 years ago:

“Let us suppose that the great empire of China, with all its myriads of inhabitants, was suddenly swallowed up by an earthquake, and let us consider how a man of humanity in Europe, who had no sort of connection with that part of the world, would be affected upon receiving intelligence of this dreadful calamity. He would, I imagine, first of all, express very strongly his sorrow for the misfortune of that unhappy people, he would make many melancholy reflections upon the precariousness of human life, and the vanity of all the labors of man, which could thus be annihilated in a moment… And when all this fine philosophy was over, when all these humane sentiments had been once fairly expressed, he would pursue his business or his pleasure, take his repose or his diversion, with the same ease and tranquility, as if no such accident had happened… If he was to lose his little finger tomorrow, he would not sleep tonight; but, provided he never saw them, he will snore with the most profound security over the ruin of hundred millions of his brethren.”

Somehow we have to learn how to care for people about whose existence we are only dimly aware. The challenge may be one to which religious teachers are better suited than ethicists to answer. Climate change is forcing upon us mental challenges and moral commitments too vast for even our most expansive reason. But while spiritual development may be the only real way in which we might so stretch our sense of self and our moral imaginations, we will also need to continue to reason about the distant effects of our actions in a way that is foreign to most spiritual traditions.

If all of this seems overwhelming, it is good to remember the payoff: unlike many other political challenges for which we might fight, climate change challenges us to be wider and more expansive in our views, and doing this can profoundly enrich our experience of what it means to be human.